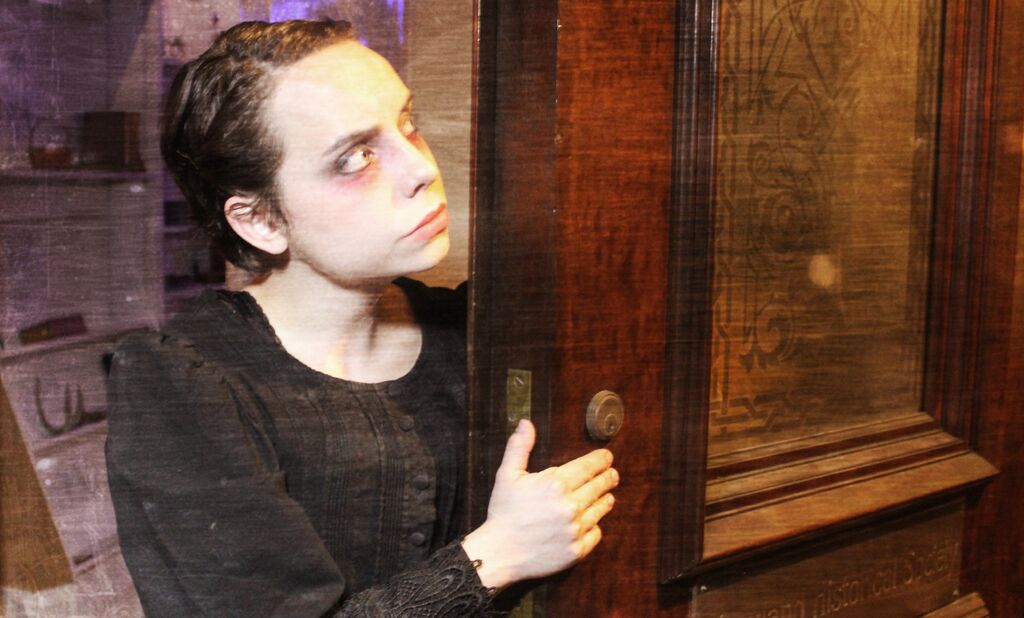 Are you asleep? Good. Let us begin.

Sleep on, sleep on, another hour —
I would not break so calm a sleep,
To wake to sunshine and to show’r,
To smile and weep…

Sleep on, sleep on, some fairy dream
Perchance is woven in thy sleep —
But, O, thy spirit, calm, serene,
Must wake to weep.

Historians note that when the poem “To —— ” appeared in the Baltimore Saturday Visiter in May 1833, it was published without any sort of introductory or explanatory text. Any secrets woven in the dream were left to the reader’s intuition and imagination.

Intuition and imagination are key to discerning the complex works of Poe, and to appreciating The Mesmeric Revelations! of Edgar Allan Poe – an immersive theatrical experience now playing (or perhaps better – unfolding) at the Enoch Pratt House in Baltimore (adjacent to the Maryland Historical Society).

Based on a concept by Glenn Ricci and directed by Michele Minnick, Glenn Ricci and Susan Stroupe, Mesmeric Revelations! is an evolving collaboration between the directors and the dozen or so members of the engaging cast. Surprisingly unpredictable, each performance draws a small circle of theatre goers into a world both bizarre and beautiful; a world occupied by characters (real and fictional) from the life and mind of Poe.

The various storylines all contain elements familiar to even the most casual of E.A. Poe fans. Poe is absent from the proceedings, but his presence may be felt everywhere.

Ricci told the Baltimore Post-Examiner that Mesmeric Revelations! is squarely rooted in the writings of Poe. Throughout each performance, the audience may catch glimpses of recognizable scenes or pieces of well known verse, along at one point with a seance-induced shower of raven feathers. Ricci also said the show has changed somewhat since it was first staged for a limited run at the Pratt House earlier this year.

“We’ve expanded the roles for the butler (Roderick) and the maid (Madeline), plus there is a character upstairs who only a few people get to see.”

There is also a mysterious wine cellar, though none of the spectators in attendance last Thursday night were clamoring for a cask of Amontillado. Even so, some people, we are told, have seen the show as many as 5 times.

Admittedly, immersive theatre is not for everyone, and at least one couple sought an early exit the night this reporter experienced the show. But for many others, Mesmeric Revelations! offers something spellbinding and decidedly unique.

“I didn’t know what to expect,” acknowledged Todd Gardner. “I was drawn into a world of uncertainty, where the house, and its inhabitants were spiraling toward insanity. As other guests were pulled from the group and led off on frantic missions, I felt as if everyone was searching for aspects of Edgar, which briefly united them, but sadly yielded few answers. The immersive aspects of this show became clear, as my companion and I were beckoned by the detective. Once drawn away from the rest of the crowd, our quest began. Everyone had a different experience, and so much was happening that you couldn’t take it all in.”

“It reminded me of the film, ‘Gothic,’ said Emily Ward. “It was a bunch of crazy people running around a mansion being crazy, and that is exactly what I wanted out of the evening. I didn’t exactly grasp the narrative, if there was meant to be one, but it was pretty and exciting and weird, and I look forward to having a differently exciting and weird experience when I see the show again.”

Actor and director Jeffrey Gangwisch said he experienced the show somewhat contrastingly  but was nonetheless impressed.

“I loved the show, but I suffered from fatigue by the end. It was wonderfully executed but very over-stimulating. I would need several viewings to be able to parse together any coherent narrative, which I’m assured is present (though I certainly missed it). My partner has seen it twice and loved seeing it the second time. Without that second time, I felt it was the classiest haunted house I had ever visited. Also, Sarah Gretchen Heiderman (Eliza) was mindblowingly wonderful, as she always is.”

This reviewer’s take of the happening? In a nutshell (and I do mean nuts), the show contains outlandish behavior, some occasional writhing and lots of enthusiastic emoting. But it is incredibly fun and exciting and fairly well-played. Most parts are double cast so the standouts from the performance of November 5 were Jenna Rossman (Eliza), Shannon Graham (Sarah) and Tanner Medding (V).

The period costumes and sets were spot on, makeup and lighting were both properly macabre, and not enough can be said about staging this show in such exquisite surroundings as the Enoch Pratt House.

The Mesmeric Revelations! of Edgar Allan Poe has been extended to December 20. Tickets are available now for those intrigued enough to exercise their imagination.

And for those not entirely afraid of what the darkness may reveal.

Mesmeric Revelations! runs now – December 20 at The Enoch Pratt House at the Maryland Historical Society, 201 W. Monument St, Baltimore (house entrance is on the corner of Monument & Park). Tickets and other information may be found at Mesmeric Revalations! and by visiting the show’s Facebook page. Please note that audience members move with the characters from room to room during the performance. Coat and bag storage will be available upon entering. Beverages and restrooms will be accessible throughout the evening.

The Mesmeric Revelations! is recommended for ages ranging from the most mature 9-year-olds up to the most adventuresome 99-year olds. One may experience intense psychological moments. Because this is an immersive experience, there will be limited seating and audience members will be encouraged to move throughout the space for the duration of the show. Please contact info@myedgarallanpoe.com if you have any questions. 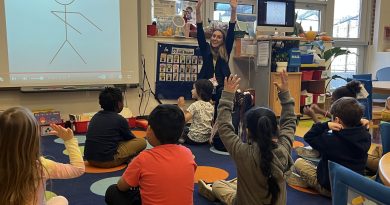