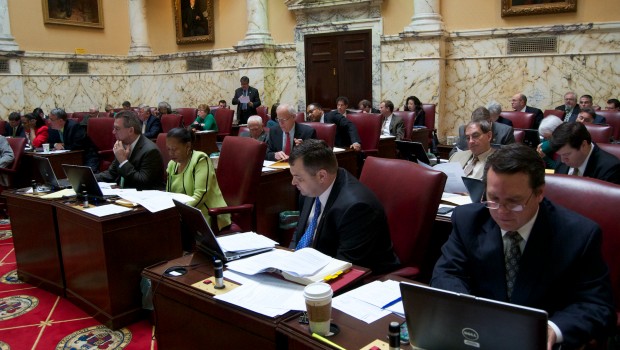 With one-week left to go in the 90-day session of the Maryland General Assembly, here is the status of legislation MarylandReporter.com has been following.

Monday after the first meeting of the conference committee on the state budget is scheduled to meet and start resolving differences between the House and Senate versions of the budget.

HUNGRY KIDS: The Hunger-Free Schools Act of 2015, Sen. Richard Madaleno’s SB 334, passed the Senate chamber with a 47-0 vote. The bill has moved onto the House where it received amendments and another unanimous 136-0 vote.

The House amended the bill to require the Maryland State Department of Education (MSDE) to submit a report to the General Assembly on the impact of the Hunger Free Schools Act by December 1st. Now it goes back to the Senate for approval of the amendments.

FLESH-EATING BACTERIA: A flesh-eating bacteria bill, Sen. Bryan Simonaire’s SB 83, passed unanimously in the Senate but has not yet made it out of the House Environment and Transportation committee. The bill would require the Department of Natural Resources (DNR) to send out pamphlets along with the purchase of any boating or fishing license; informing Chesapeake Bay lovers of the dangerous Vibrio bacteria.

SAME-SEX INFERTILITY: A bill providing infertility service coverage for same-sex couples, SB 416 sponsored by Sen. Cheryl Kagan, passed the Senate with a 37-10 vote. It moved onto the House for review where it received a favorable report with no amendments from the House Health and Government Operations committee. Now the bill awaits its time to be heard on the House floor.

FRAUD AND WHISTLEBLOWERS: The Maryland False Claims Act, a bill to widen Maryland’s current false claims protections to state and local government contractors, passed the Senate with a 46-1 vote. SB 374 was introduced at the request of Attorney General Brian Frosh.

ONLINE TRAVEL TAX: Both House and Senate versions a bill that would “close a loophole” in online travel taxhave been special ordered to be heard in the House this Monday, April 6th. Although the bills are identical, theSenate version has made it farthest; passing through the Senate chamber with a 32-15 vote, now awaiting its’ vote on the House floor Monday.

Is Wisconsin crying wolf too many times?

Battle for America heats up in Kentucky