Sen. Allan Kittleman announced Wednesday that he was organizing a run for Howard County executive, encouraged by a poll that shows he could beat the two leading Democrats mentioned for the job.

“My message of fiscal conservatism and individual freedom resonates with the voters of Howard County,” Kittleman told a breakfast meeting of supporters in Ellicott City. In an interview, Kittleman said, “Not only am I viable, but I’m winning against Guy and Courtney” (Del. Guy Guzzone and Council Member Courtney Watson) and “beating them by 20 points.”

Howard County Democratic Chair Michael McPherson laughed at the figures from the poll done for Kittleman by Public Opinion Strategies.

“He has somehow misread his numbers,” McPherson said. “I don’t see from my knowledge of the voting patterns in Howard County how he can beat any Democratic candidate.”

Looking at race for some time

Kittleman was known to be looking at entering the race for executive for some time, a race he considered six years ago. Kittleman was initially appointed to the Senate in 2004 to fill the term of his late father Robert Kittleman after serving on the Howard County Council for six years.

The younger Kittleman resigned as Senate minority leader last year when he decided to become the only Republican to vote to allow same-sex marriage. Some Republicans considered that move an attempt to appeal to more Democrats and independents beyond his conservative base in western Howard and southern Carroll counties.

Both Kittlemans came from the GOP’s libertarian wing, and Bob Kittleman was lifetime member of the NAACP, participating in civil rights demonstrations in the 1960s.

At the Jilly’s breakfast meeting with 75 people, Kittleman emphasized his pro-business credentials as an advocate for right-to-work laws and an opponent of prevailing wage requirements. “It’s hard to understand why people in Annapolis don’t understand economics,” Kittleman said. “We’re hitting people right and left, but it is always a little bit at a time.”

“This is a race that’s going to take an awful lot of financial resources,” Kittleman said. “If I can’t get that, I’m not going to put my family through it. If we have the resources, if we have the organization, we’re running.”

Kittleman wouldn’t name a dollar figure, but noted that in the 2006 race for the open seat for county executive pitting Democrat Ken Ulman and Republican Chris Merdon, both candidates spent more than $700,000. Ulman is term limited, but continues to raise money for a statewide race, possibly for governor.

“If my message is given to the voters, I will be successful,” Kittleman said. “Three-fourths of the county would call themselves a fiscal conservative.”

Only one Republican elected executive

Only one Republican, Chuck Ecker, has been elected Howard County executive in 42 years of charter government, although former Democratic Del. Hugh Nichols did switch parties at the end of his second term as executive.

Neither Guzzone nor Watson has announced their plans for 2014.

Guzzone was skeptical of the polling, saying it reminded him of a 2010 poll that supposedly showed the executive race tightening between Ulman and Republican Trent Kittleman, Allan Kittleman’s stepmother. A month later Ulman beat Trent Kittleman by 25 points, with 63% of the vote.

Guzzone said that typically early polls are designed to help candidates raise money and the results depend on how the questions are asked.

Watson said, “I’m not focused on politics. I’m just focused on working to get things done for the people in Howard County,” such as the economy section of the General Plan that she’s working on this week.

“Right now there’s too much work to be done,” Watson said.

McPherson said, “We continue to have one of the best qualities of life in the state and the nation. How can he improve on almost perfection brought to you by Democrats? We will see come 2014.” 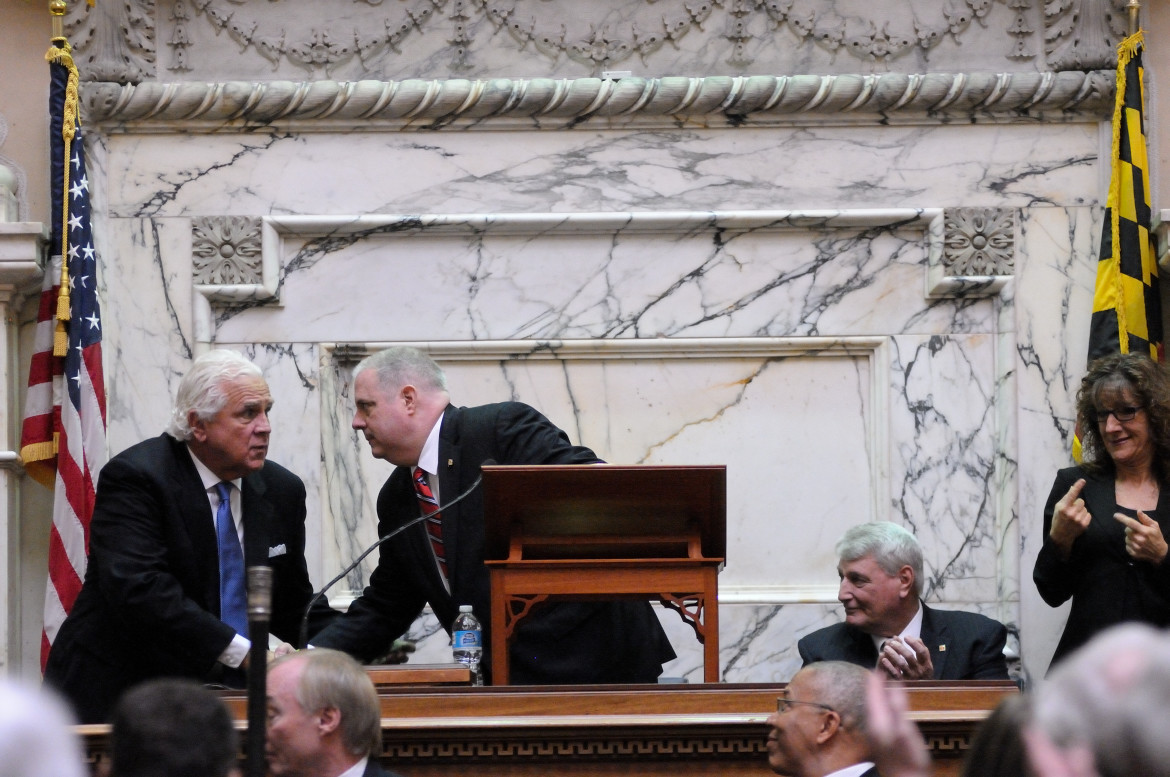