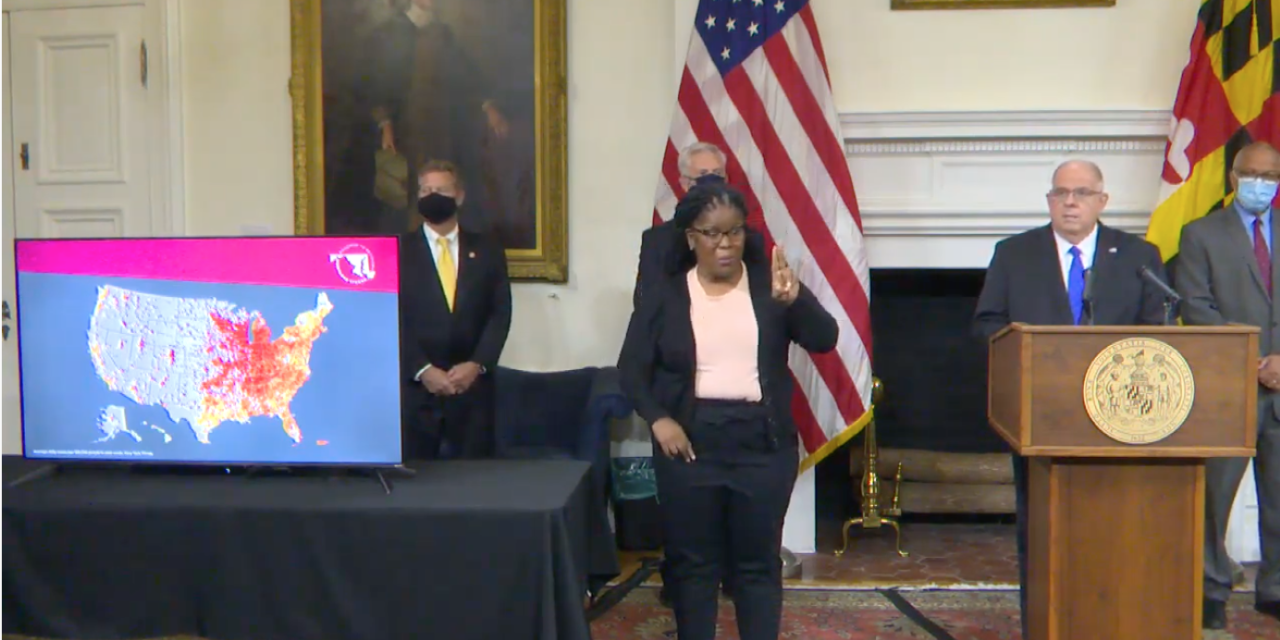 Due to the rising number of coronavirus cases in Maryland the state will further limit indoor dining capacity at bars and restaurants, Gov. Larry Hogan said Tuesday evening.

“Today I am announcing that effective tomorrow November 11th at 5 p.m., roughly 24 hours from now, the capacity for indoor operations at bars and restaurants will be reduced from 75% back to 50%,” Hogan said at a news conference at the State House in Annapolis.

He added: “Bars and restaurants in Maryland have only been permitted to open for seated distanced restrictions. No standing in bars has been allowed. Patrons have been required to spread tables at least six feet apart. And no large groups larger than six per table. Customers who are not seated cannot be served. And tables must be cleaned and disinfected between each seating.”

Hogan noted that 11 of the state’s jurisdictions have positivity rates above 5%. They include Baltimore City, Baltimore County, Hartford County, Somerset County, and Washington County. Centers for Disease Control (CDC) guidelines say that positivity rates should remain below 5% for best mitigation efforts.

The governor said that today the Maryland Department of Health issued a new advisory “strongly warning against any indoor gatherings of 25 people or more.” The governor said the department has also issued an “expanded” travel advisory to urge Marylanders not to travel outside of the state unless it is absolutely necessary. And state employees who have been approved for telework will be required to do so for now on, Hogan said.

“Today’s announcement from the Hogan Administration is a sensible and very welcomed step in the right direction, allowing Maryland to apply the same approach to statewide COVID-19 care that we already have in place for trauma care,” Scalea said in a statement. “The University of Maryland Medical System, through our own Unified Incident Command Structure, has already stress-tested this common-sense strategy by shifting resources and transferring patients within our own 13 hospital system over the course of the pandemic, and I have tremendous optimism that the State can successfully apply much of what we have learned over the past eight months.”

Business groups are not happy about the indoor dining restrictions that are about to go into effect.

“Bars and restaurants in Maryland were just beginning to see their way through a summer unlike any they have ever seen. The action taken by the Governor today to reduce capacity at bars and restaurants will hurt,” O”Halloran said in a statement.” Those establishments that cannot seat customers outside or don’t have the financial means to set up outdoor seating will be in an even tougher financial spot because of today’s order. When so many small businesses are barely staying afloat and many are already coping with strict capacity limits, another reduction in revenues could result in permanent closures.”

He added: “Instead of penalizing those business owners who are following the rules and already in danger due to lower revenues and fewer customers, the state should continue pursuing aggressive enforcement actions against willful violators. This step backward could do irreparable damage to an industry already on the brink.”

“Our numbers make it very clear – we’re at a pivotal point in this pandemic and the personal actions taken over the next few months will be critical in slowing the rapid spread we’re currently seeing,” Ball said in a statement. “Wearing a mask and maintaining physical distance are the best ways to prevent the spread of this virus, and we must practice these strategies in private and in public – that includes gatherings with family and friends. It’s natural to let your guard down among close family and friends, but that is where we’ve seen continued spread happen. We recognize that there is COVID-19 fatigue, but we cannot grow weary. If you leave your house, you should be wearing a mask. If you are around anyone outside your household, you should be wearing a mask, it’s that simple. Let’s protect one another.”

There are 156,709 confirmed cases of COVID-19 in Maryland as of Tuesday morning, according to the state’s Department of Health, and 4,084 people in Maryland have died from the virus. The state’s positivity rate is at 5.24%. Maryland has conducted more than 3.7 million COVID-19 tests.