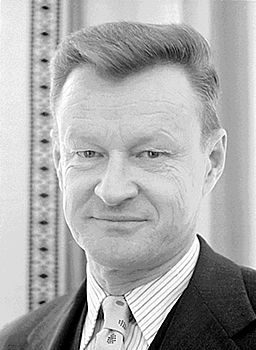 Carter lavished praise upon his National Security Advisor during MSNBC’s Morning Joe where Brzezinksi’s daughter Mika paid a tribute to her father who died Friday. He was 89.

The co-host of the Morning Joe show also took to social media to honor her father.

“Chief loved making his family laugh. He loved Maine more than anything — where we hiked as a family, swam, played tennis and rode in his broken-down boat to the beautiful islands just off Northeast Harbor,” Brzezinski wrote on Instagram.

“He played an essential role in all the key foreign policy events of my administration, including normalization of relations with China, signing of the SALT II treaty, brokering the Camp David Accords, and the Panama Canal treaties, among others,” Carter said in a statement. “He was brilliant, dedicated, and loyal, and remained a close advisor to my work at The Carter Center. I will miss him.”

Brzezinski was born in Warsaw, Poland in 1928. His numerous academic publications include The Soviet Bloc, which analyzed the social, political, and economic dynamics affecting Eastern European nations that during the Cold War were held captive by the Soviet Union.

“Dr. Brzezinski’s influence spanned several decades. I was one of several Presidents who benefited from his wisdom and counsel,” Obama said in a Saturday statement.

“Zbigniew Brzezinski was a great American who served our Nation with honor. Widely respected as a scholar and a practictioner, his command of foreign affairs made him both an instrumental architect of key policies — and an influential voice in key policy debates. But most importantly, Zbig was a good man and a good friend, and we join in offering our sincere condolences to Emilie and his entire family, they said in a joint statement issued Saturday.