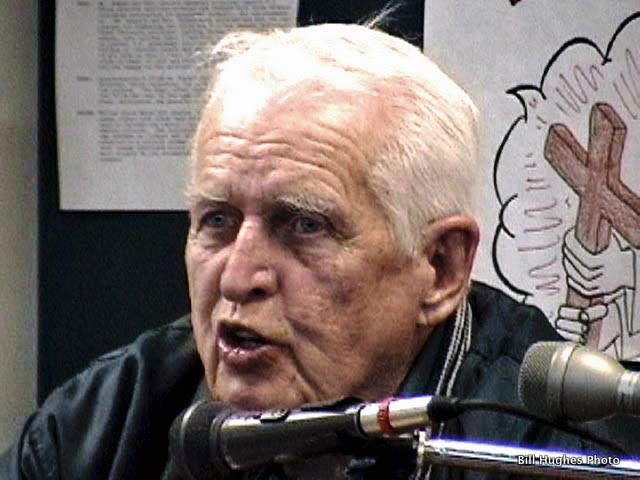 When is the last time someone read the poem, “The Fiddler of Dooney” in front of the White House? afternoon, May 30, 2017.

Around 2 p.m. social justice activists, in the hundreds, gathered in front of the White House. They had just marched from the Lincoln Memorial, under the leadership of the “Veterans for Peace,” a national organization.

They had rallied earlier in front of the Lincoln Memorial. A coalition of ten other antiwar, peace and justice organizations had participated in that spirited demonstration.

At the White House, the activists had one simple message for President Donald Trump. It was: “Stop the Endless Wars!”

One of the speakers in front of the White House was Ray McGovern, political activist, ex-U.S. Army veteran and a former CIA analyst. Check out his bio.

McGovern fondly recalled his early days of peace-making activism and his relationship with two legends in that area of concern – both now deceased – Phil Berrigan and his brother Fr. Dan Berrigan, S.J.

Phil Berigan, some may recall, spent many of his years of activism, including the “Catonsville Nine” action, in Baltimore and environs.

Phil’s daughter, Frida, recently wrote a popular book about what it was like growing up with parents – Liz McAlister is her mother – who were full time “peacemakers.”

McGovern, a native of the Bronx and a U. of Fordham graduate, then read from a popular Irish poem, “The Fiddler of Dooney.” It was authored by William Butler Yeats in 1899.

“The Fiddler of Dooney:”

When I play on my fiddle in Dooney,

My cousin is a priest in Kilvarnet,

I passed my brother and cousin:

They read in their books of prayer;

I read in my book of songs

I bought at the Sligo fair.

When we come at the end of time

To Peter sitting in state,

He will smile on three old spirits,

But call me first through the gate;

For the good are always the merry,

Save by an evil chance,

And the merry love the fiddle,

And the merry love to dance:

And when the folk there spy me,

They will all come up to me,

With ‘Here is the fiddler of Dooney!’

After his reading, McGovern wished all his colleagues “joy” in the spirit of the Fiddler of Dooney.

The Fiddler of Dooney: Reading by Ray McGovern from Bill Hughes on Vimeo.

Have You Developed Cancer after Exposure to Fire Fighting Foam? Here’s What to Do Next