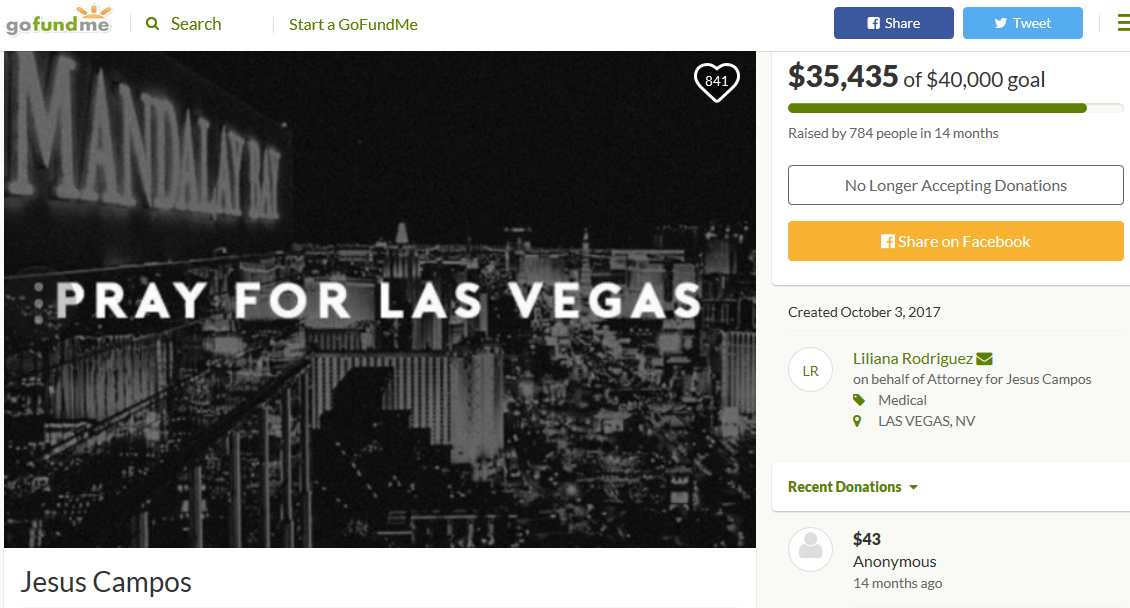 LAS VEGAS — The Baltimore Post-Examiner has obtained a letter written by Mandalay Bay Hotel Security Officer Jesus Campos stating that he gave his brother, Jorge Quintero, $10,000 in December of 2017.

That GoFundMe account indicated that the donations were for “medical.” 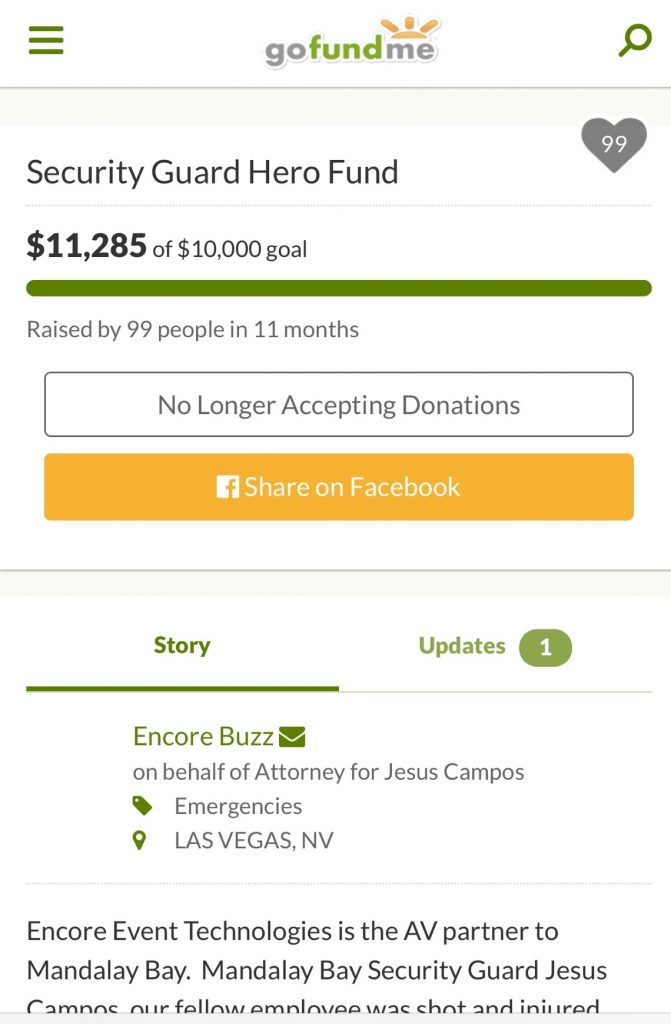 “My name is Lilly. I am raising funds to assist Jesus Campos, a co-worker, that was injured during the tragic Las Vegas shooting. Unfortunately, he was shot while on random patrol. Funds will be used to provide relief and financial support for him while he gets back on his feet. This is a young man that I work with day in and day out. Any financial support would be appreciated for the time he would need to recover. Anyone of us could have been in the position he was in. Most importantly we are a home away from home and at the end of the day we are a team and we should all go home together.”

Another GoFundMe account was created on behalf of an attorney for Jesus Campos, by Encore Event Technologies, the Audio Visual partner to the Mandalay Bay Hotel. They indicated on the GoFundMe page that “Mandalay Bay Security Guard Jesus Campos, our fellow employee was shot and injured during October 1.”

That account indicated that the donations were for “Emergencies.”

Campos’ former brother-in-law, Luis Castro, told the Baltimore Post-Examiner that Campos had no money prior to October 1, 2017 and that he was living with Castro and at times with friends and or his girlfriend. 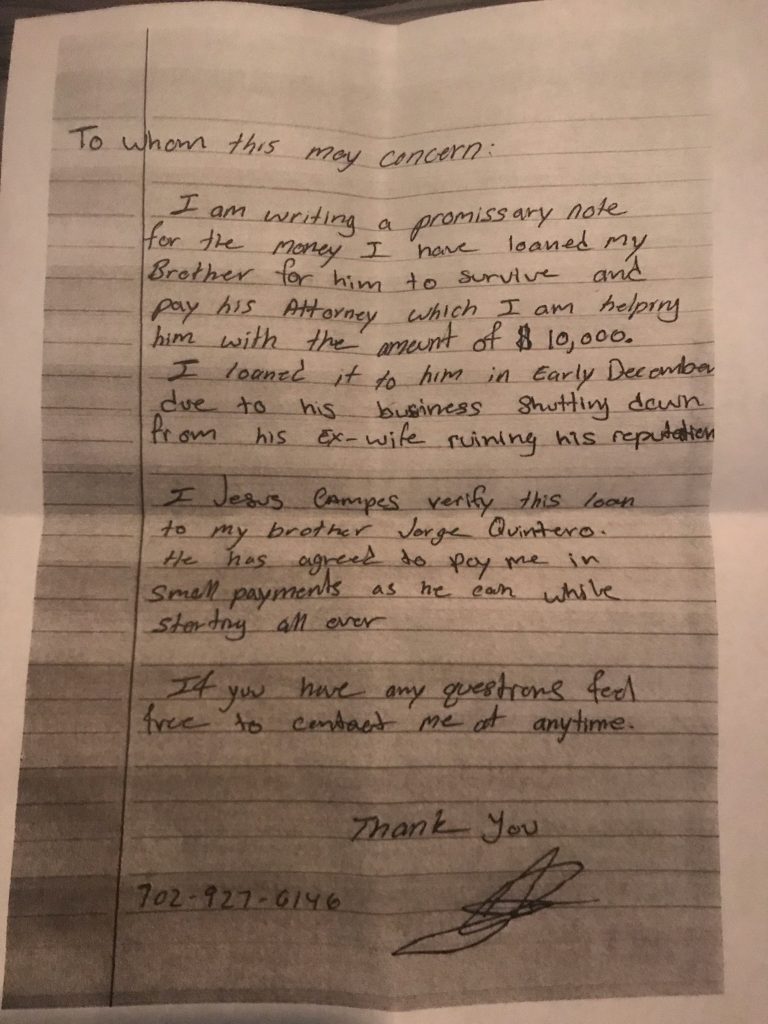 According to Castro in December of 2017 Campos wrote a letter that was later submitted to the Court during the custody hearing between Castro’s sister and Quintero, her former husband.

Castro stated the letter from Campos was used to show that Quintero had some financial income.

The letter which was obtained by the Baltimore Post-Examiner and according to Castro is signed by Jesus Campos reads as follows:

“To whom this may concern: I am writing a promissory note for the money I have loaned my brother for him to survive and pay his attorney which I am helping him with the amount of $10,000. I loaned it to him in early December [2017] due to his business shutting down from his ex-wife ruining his reputation.

I Jesus Campos verify this loan to my brother Jorge Quintero. He has agreed to pay me in small payments as he can while starting over. If you have any questions feel free to contact me at any time. Signed Jesus Campos.”

Castro told the Baltimore Post-Examiner that if the $10,000 Campos gave to his brother is linked to GoFundMe, then that money was used for other than the purpose stated on the GoFundMe account. Castro said he spoke to the police about his concern.

After the Las Vegas massacre, many people expressed their generosity and charitable spirit by donating money to the hundreds of victims that sustained injuries.

The Baltimore Post-Examiner requested comment from Jesus Campos and Jorge Quintero. They did not return calls.

On a separate note, S/O Liliana Rodriguez was working in the Mandalay Bay Hotel security surveillance/dispatch room on the night of the October 1, 2017 Las Vegas Massacre.

The Baltimore Post-Examiner reported in our December 14, 2018 story, “What entry was logged at 9:59 p.m. by Mandalay Bay security night of Las Vegas massacre?,” that Rodriquez at 11:52:51 p.m., was on the telephone with Campos as follows:

“Campos, you got hit right; was this related to what’s going on? OK did you get a description…and you got hit…and you didn’t see anybody?”

One hour and thirty-six minutes after the last shots were fired Rodriquez was asking Campos if him getting shot was related to what’s going on. 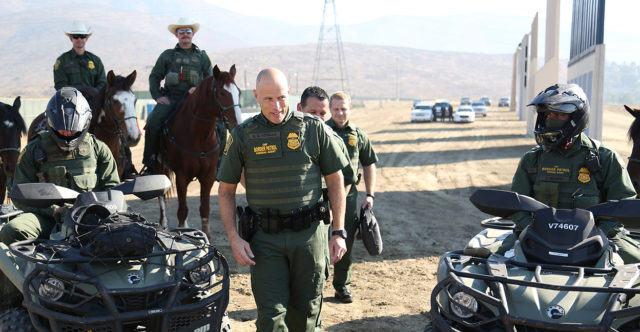