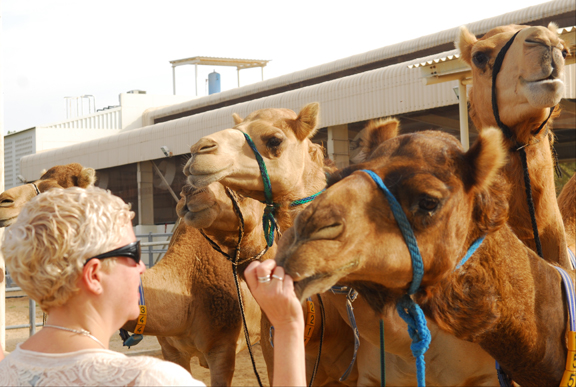 DUBAI — Mention Dubai, and people immediately think of soaring skyscrapers, enormous shopping malls and insanely expensive sports cars. But 30 kilometers south of this world-class city-state — along the E66 highway towards Al Ain, and just past a Chuck-e-Cheese outlet — the glitz gives way to desert.

Here at Umm Nahad, there are no architectural wonders to behold, other than a lonely strip of asphalt stretching into the distant horizon. The quiet is punctuated only by the occasional screech of jets taking off and landing at a nearby military air base.

What a perfect place for a camel farm. 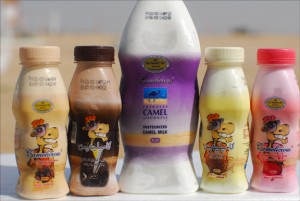 About 250 people work at EICMP, on a huge tract of land covering 25 to 30 square kilometers.

“Dates and camel milk are part of the staple diet of Bedouins. This is what people here used to live from,” said company communications director Kirsten Lange, interviewed during our recent visit to EICMP. “Quite a few locals have camels. They drink the raw milk from their own camels, even though they might live in the city.”

At the moment, about 3,600 camels make up this operation, Lange said. The idea is to have 10,000 animals within the next two or three years.

So how do the workers keep track of all these dromedaries?

“The camels have numbers, but of course our vets know the old ones,” Lange said as she guided us around the farm. “Once in awhile, we give them names. Once we had a camel with lots of hair; we called her Tina Turner. They have GPS trackers on their collars, and we have a very extensive database. On every camel we have a huge database, and they get regular blood and urine tests.” 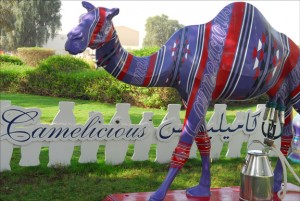 The point is to get these camels to produce as much milk as possible. The average camel gives seven liters a day, though not all camels are producing at all times. Daily production averages 5,000 to 6,000 liters, she said.

Last February, the company got permission from U.K. authorities to export its camel milk to the British market. The Camelicious brand is now available in selected ethnic stores in London, Brighton, Manchester and Bradford. Milk powder has also been shipped to potential partners in the cosmetics and pharmaceutical industrie

“Camel milk has always been known in the Middle East, but the accessibility for the wider public has been limited. We at EICMP have been reaching out to the broader community in the UAE to encourage a healthy lifestyle since 2006,” said Mutasher Al Badry, the company’s manager of business development. “Our goal is to promote the benefits of camel milk as a natural and pure resource of the region, and as a healthy alternative to cow’s milk.”

While not everyone likes the taste of camel milk — Camelicious tends to have a pleasing, slightly salty taste — but  it’s far healthier than the kind that comes from cows.

Besides having three times more Vitamin C and 10 times more iron than cow’s milk, it’s antibacterial, low in lactose and shows promise in treating everything from diabetes to Crohn’s disease. A 2005 study showed that just 500 milliliters of raw fresh camel milk daily improves the quality of life for diabetics, thanks to a protein found in this particular milk that has characteristics similar to insulin but doesn’t coagulate.

“About 25 years ago, Dubai’s Central Veterinary Research Lab set up a research facility to explore what a camel could really be used for. Before that, no one thought of commercially exploiting camel milk,” she explained. “After awhile, when it became clear that this might be profitable, the company was set up on the same premises under the leadership of CVRL. It was founded in 2003 and became operational three years later.”

Lange, a German development and PR consultant who speaks Arabic fluently, previously worked in Afghanistan, Kuwait and Yemen before resettling in Dubai. She said the Camelicious operation is heavily subsidized by the government, to the tune of “tens of millions of dollars,” though she wouldn’t be more specific. 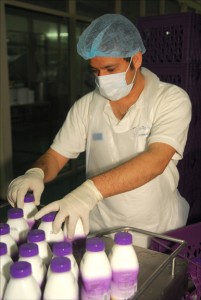 “It is a private company, of course, owned by several shareholders. It’s not at the break-even point yet, but right now, with exports to Europe and the prospect of getting FDA approval — as well as getting into new industries like pharmaceuticals — inshallah it will be profitable soon. We see a lot of market potential.”

Camelicious comes in a variety of tempting flavors — so far, it’s available in plain, chocolate, saffron, date and strawberry. With the brand’s humorous logo of a cartoon camel with sunglasses, one might think this would be the perfect off-the-beaten-path destination for tourists and their kids.

But this isn’t Dubai Waterpark. As Lange said, “we are not a tourist attraction. We are running a business operation here with ISO and EU standards.”

Most of this operation is even off-limits to members of the media, who are not allowed anywhere near the milking facility. And visitors may enter the production and bottling line only after donning disposable blue outer garments to reduce any possible contamination from outside.

Many of the workers, it appears, come from India, Bangladesh and Nepal — along with several Arabic-speaking employees — though none of them would talk to this reporter. Asked how they all communicated, Lange said, “the ones who don’t speak English take classes. We have people who started here eight years ago not knowing English, and now their English is excellent. We take pride in caring for our workers.”

On the other hand, she said, “running a camel farm is not only about having camels. Here, we have 10 years of company experience and 25 years of research, but we are not done. No one is ever done,” she said. “Everyone who sets up a camel farm will eventually face problems.” 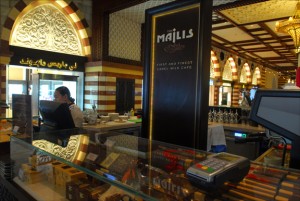 One such problem surfaced last June, when a team of Dutch and Qatari medical researchers found that the virus which causes Middle East respiratory syndrome (MERS) is found in camel milk. That prompted the Qatari government to issue guidelines warning against drinking raw camel milk, and that milk be boiled before consumption.

In Dubai, Camelicious is available through the Waitrose supermarket chain for 10 dirhams per liter; its price is fixed by local municipal authorities.

But in the States, camel milk costs more than some premium liquors, when it’s available at all. Walid Abdul-Wahab, founder and CEO of Desert Farms, told the trade industry publication DairyReporter.com there are 18,000 cows for every camel in the United States. That’s why pasteurized whole camel milk goes for $16 per pint (473 ml).“Camel milk retails for double the price of cow’s milk, but when it comes to European prices and maybe later on the U.S. once we get FDA approval, it’s up to the retailers,” said Lange. “It’s all about creating standards for camel milk. How do you judge whether the quality is good or bad? For other milk, there are already standards. The FDA basically has to do the same.”

However, getting the green light from the U.S. Food and Drug Administration could be a long way off, especially considering that it’s still strictly illegal to import or sell camel milk in the United States.

“We need to do market research before we go there. The U.S. is huge, but production is limited, so we have to be smart and wise,” Lange told us. “Peoples’ demands for natural products are growing worldwide. We can replace a lot of the chemical components in creams and medications, especially when it comes to nutritional substitutes and health-boosting products.”

As good as its camel milk may be, Camelicious won’t be doing business with one Middle Eastern country anytime soon: Israel. Besides the fact that the UAE and Israel don’t have diplomatic or trade relations, camel milk isn’t kosher — as any rabbi can attest — and is therefore prohibited under Jewish law. 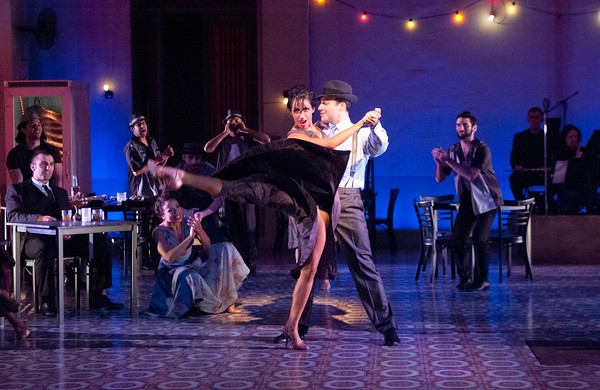 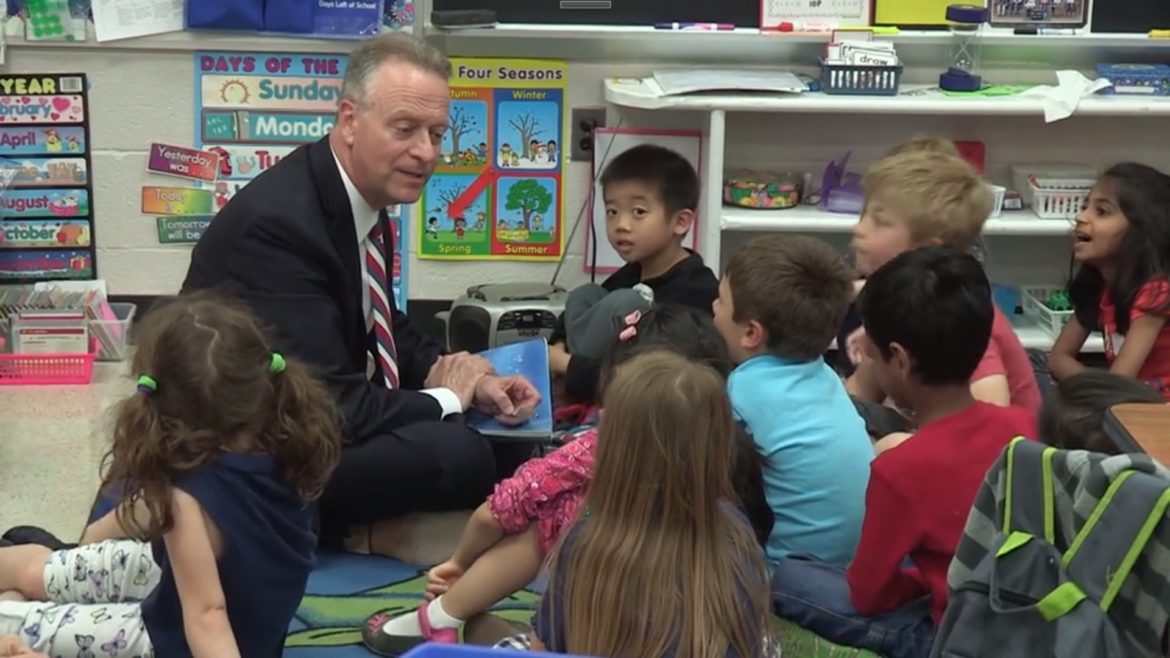