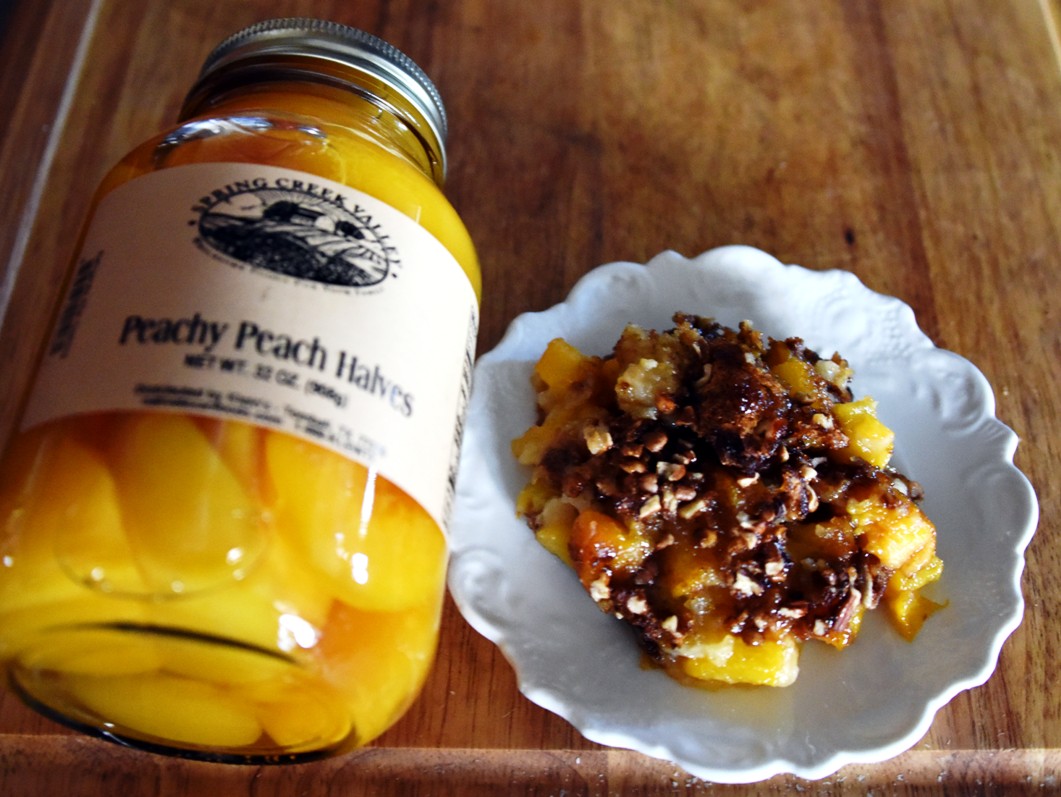 Nothing compares to summer’s sweet, juicy peaches right off the tree, except for a canned jar of the yellow-orange fruit during fall or winter. Though great right out of a jar, canned peaches can be baked into cobblers or crisps for breakfast or dessert. Here is a recipe clipped from a 1950s newspaper, another way to serve canned fruit. Apparently it won a prize for The Best Most Distinctively Different Dessert. I have to agree.

Here are two versions, one from the newspaper clipping and the second, my up-dated version. 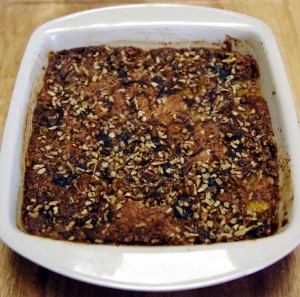 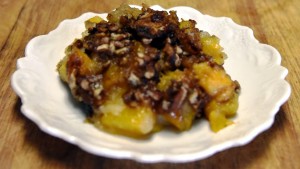 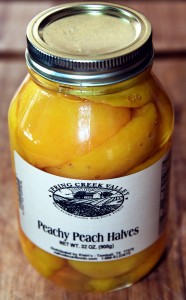 Drain peaches ahead of time. Dice.

In a separate bowl, mix flour, soda, sugar, and salt.

Fold in peaches. The batter will be sticky.

Combine brown sugar with cinnamon and nuts, sprinkle over batter.

Where to find Canned Peaches? During our travels this summer, we came across displays of canned fruits and vegetables in off-the-road, fruit stands, family owned restaurants and specialty stores. I couldn’t resist and brought several jars home. The peaches I used in this recipe were Peachy Peach Halves from Tomball, Texas. In Maryland I use canned peaches from Scenic View Orchards in Sabillasville. You can find them on the shelf next to the quarts of apple butter.

Of course there’s no substitute for home-canned peaches. Even now my mouth waters thinking of my grandmother’s canned cling peaches. During peach season, my grandfather rose early, picked several lugs of ripe peaches from his garden and then set them on the long wooden, kitchen table. The women washed, cut, pitted and pealed the fruit. Others carefully immersed the glass canning jars and rings in pots of boiling water. Once the prepared peaches were added to the jars, the rings and tops were screwed tightly over the tops and the jars set upside down to cool. Then everyone waited for the tapping sound as the seals popped into place. The few jars that didn’t seal were set out in bowls for good eating. They disappeared quickly. Needless to say, it turned out to be an all-day project and not without a few burned fingers but well worth the effort. Enjoy!

Hints from Kitchen’s Past: To keep your griddle from smoking: rub it frequently with half a rutabaga. To keep celery crisp, stand it up in a pitcher of cold water & refrigerate. Feasting with Saint Francis, 1985.

Keep oil or shortening clean of cooked particles when used in a deep fryer by straining through a piece of old nylon stocking. Raw potato cooked in it will freshen the taste. To keep out weevils: store flour, meal, cereals and dried foods in glass jars with a tight fitting lid. Cut out labels and place in jar. Washing vegetables: to rid of insects, wash in water to which has been added a pinch of borax and a little vinegar. Cooking at the Y, Laurel, Mississippi, 1973-1974 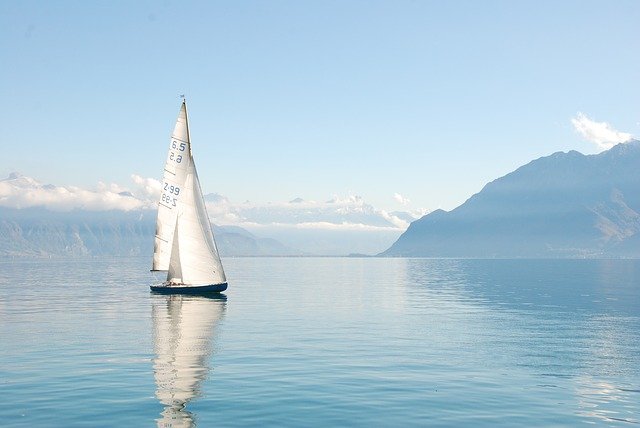 Trading Safety for Survival: Violence against Baltimore women in the sex trade

Ronald Reagan & The Fats Cats: A Prelude to Donald Trump