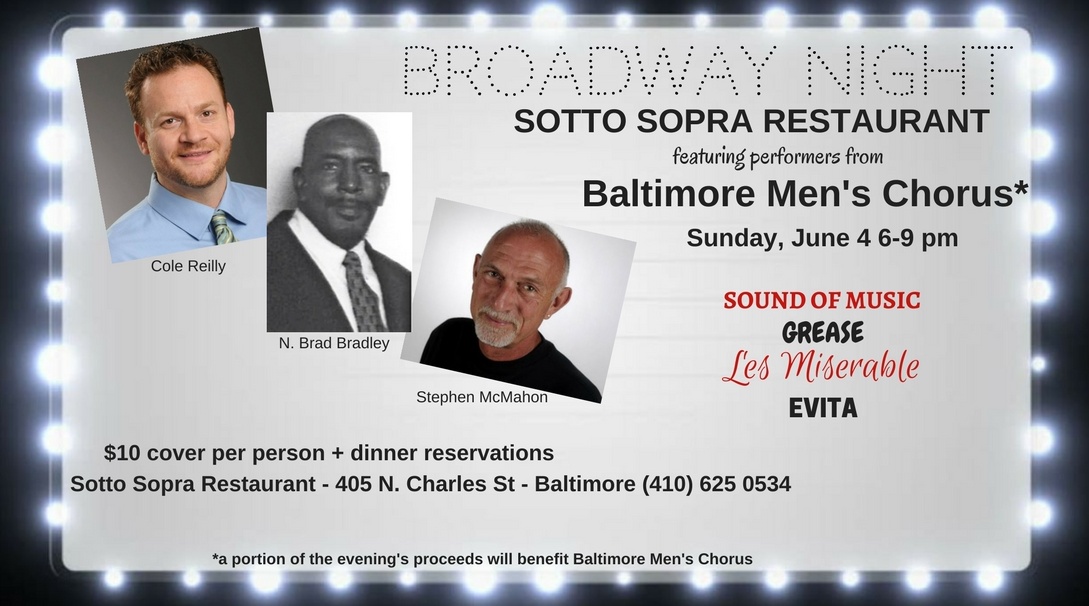 Sotto Sopra is encouraging attendees to come dressed as anyone of their favorite Broadway show characters, so put on your lederhosen if Sound of Music is your favorite or rollers in your hair if you are a beauty school dropout from Grease. There will be prizes awarded for their favorite costumes.  The performers will be encouraging singing along should the guests wish to participate in select favorites.

On this special Broadway night, performances will be from four popular and diverse Broadway show songbooks:

Sotto Sopra Restaurant will be donating a portion of the evening’s proceeds to the Baltimore Men’s Chorus to support their continuing education and performance programs. One can enjoy this Broadway Night song-filled evening for a $10 cover charge plus dinner selections from Sotto Sopra’s award winning ala carte Italian menu – reservations required (410)625-0534. 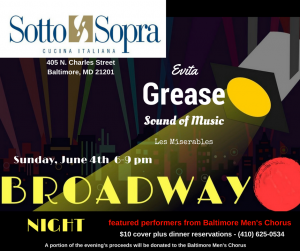 The Baltimore Men’s Chorus (BMC) – Since 1984, the mission has been to provide local men the opportunity to enjoy learning and singing choral music. They have performed in many locations, including New York City, Seattle, Philadelphia, Annapolis, and of course, Baltimore. The Baltimore Men’s Chorus welcomes all male singers – regardless of gender identity or sexual orientation.

Nathan “Brad” Bradley has been a shower singer since birth, but he brought his singing talents to the stage in the late ‘80s when he first joined the Baltimore Men’s Chorus. Since then he has sung with Voices Of Kentuckiana and the Indianapolis Men’s Chorus (when he lived in those areas) before returning to the BMC in 2002. A former BMC president, he is currently on its board as treasurer and sings bass (but has also sung tenor at times).

Steve started playing “air piano” at the early age of four and his parents soon had him taking lessons, tickling the ivories on a real piano. With time, he furthered his studies with teachers at Peabody.  Steve’s lifelong love of music includes singing too; he has sung chorally with the Baltimore Symphony Chorus, the Gay Men’s Chorus of Washington, DC, and Potomac Fever before joining the BMC as a baritone/low tenor.  Friends and family often gather around the piano at Steve’s home for fun evenings of ‘live’ Broadway karaoke.

Cole’s big family couldn’t be more unlike the Von Trapp Family singers; to this day, his un-musical siblings and Irish (not Austrian) kin insist he leads every family rendition of “Happy Birthday” … even on his own birthday. He minored in music and was in 50 plays and musicals since 10th grade.  After not performing for about 7 years (instead focusing on his doctoral work and getting tenure at TU), Dr. Reilly began singing tenor (and sometimes bass) for the BMC in 2011 and is the group’s current president. 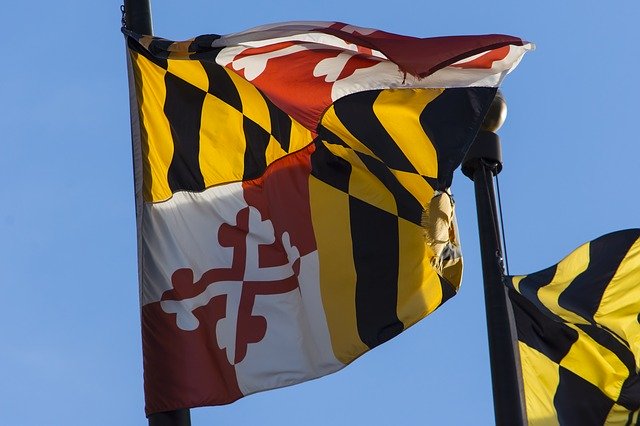