It was August of 2013, and GOP strategist Jesse Benton was getting ready to take one for the team.

“Between you and me,” he told a conservative activist in what he thought was a private call, “I’m sort of holding my nose for two years because what we’re doing here is going to be a big benefit to Rand in ’16.”

In the secretly recorded call, Benton explained why he wasn’t too excited in his new job as campaign manager of Senator Mitch McConnell’s reelection bid. Benton was a loyal foot soldier of Rand Paul and his libertarian philosophy, and had only signed on to McConnell’s reelection team as a favor to Kentucky’s other Republican senator.

When the recordings were released by EconomicPolicyJournal.com, Benton scrambled to contain the damage. In good political fashion, his response was feigned outrage. “It is truly sick that someone would record a private phone conversation I had out of kindness and use it to try to hurt me,” Benton said in a statement that was both drafted and released by the McConnell campaign.

It was a one-day news story. But the lack of enthusiasm from the campaign manager of the country’s most powerful GOP Senator drives home a larger point: No one really likes Mitch McConnell.

And Mitch McConnell seems to be just fine with that.

The unprepossessing politician in his seventies with a weak chin and even weaker hold on the hearts of Kentuckians would rather be feared than loved. Longtime Kentucky politicians will tell you that he hasn’t forgotten any grudges in his thirty-year career in the Senate—and knows how to communicate his displeasure. “He doesn’t say anything. He just sits there and stares at you,” one person who got on the Senator’s bad side remembers. “It’s bone-chilling.”

It’s an image that McConnell doesn’t even try to dispel. He doesn’t pander to reporters or make any effort to cultivate the press. He’s been described as having the charisma of an oyster, and in his relatively rare interviews he never gives the impression of striving to win his audience over. He seldom smiles, and his usual expression is a tight-lipped, almost cartoonish look of alarm, like a grandfather strolling around town who’s just remembered he left his bath running.

In his 30-year career in Washington he’s never been defeated, but he has been left at the altar once by voters. “Our top political priority,” he declared to a crowd of well-wishers in 2010, “is to make President Barack Obama a one-term president.” When America didn’t oblige him, it was seen as a serious defeat for the Minority leader.

After all, no one in Congress had fought this president quite like Mitch McConnell, and no one was more responsible for crystallizing GOP resistance to his agenda. McConnell explained the importance of a unified GOP caucus in an interview. “We knew we couldn’t stop the agenda, but we thought we had a chance of creating a national debate about whether all of this excess was appropriate. And the key to having a debate, frankly and candidly, was to deny the president, if possible, the opportunity to have any of these things be considered bipartisan.”

In that area, McConnell certainly succeeded. Republicans in the Senate would be unified against the Obama agenda, and immune to any overtures the President might make. And, he hoped, voters would see the gridlock and frustration in Washington, and assume the president must be at fault.

It didn’t work out that way of course. Through record and reflexive filibusters, McConnell’s foot soldiers slowed the progressive advance but didn’t stop it, and while the logjam took its toll on the President’s approval rating, he still managed a rather decisive reelection. But what had to prove way more devastating on election night 2012 was another development for McConnell, a disappointing night in the Senate in which his Republican caucus actually lost two seats. The minority leader would only command 45 seats in the 113th Congress—enough to gum up the works some more, but not enough to realize his dream of becoming Majority Leader.

This November he’ll have another shot. With several Democrats endangered in red states, his party may well pick up the six seats they need for a majority. But here’s the rub: they may have to do it without Mitch McConnell.

He’s facing a nuisance primary challenge back home. Businessman Matt Bevin trails McConnell widely in Republican polls, but with the primary a month away McConnell can’t take any chances. More popular Republican incumbents have lost their primaries in recent memory, but for now McConnell’s primary challenger is the lesser of his worries.

That’s because the taciturn obstructionist is in the fight of his political life back home. After 30 years in Washington, Kentucky’s senior senator may have worn out his welcome back home. Despite representing a deeply conservative state, his approval ratings are actually a few points worse than President Obama’s…and Democrats may have found the challenger who can be their giant-killer.

Allison Lundergan Grimes is the Secretary of State of Kentucky, elected in 2011 with over 60% of the vote. That’s right—a Democrat who has won a statewide race in Kentucky by over twenty points has set her sights on the most unpopular, albeit powerful, Republican senators in the country. Than alone is enough for Kentucky to command the spotlight on Senate races this year. But there’s more.

Watching Grimes in commercials and prepared stump speeches, she seems to be the yin to McConnell’s yang. Personable and engaging on the campaign trail, she adroitly keeps her distance from President Obama and national Democrats as she lights into McConnell in unusually personal terms, even for politics today.

“He’s wasted decades blocking legislation that would have helped Kentucky families,” Grimes says in her campaign’s introductory video that won rave reviews from pundits. “And he’s done it for the worst possible reason—out of spite.”

What a brilliant opening shot! It speaks to the suspicions most Kentuckians have about their senior senator, the 30-year creature of Washington who has done more to poison the political well than any career politician still in office. As Grimes points out, McConnell has consistently opposed minimum wage increases—widely popular in impoverished Kentucky—even while becoming a millionaire himself during his time in office.

It’s reminiscent of the attack ad created by the DSCC a few years ago, which airs video of McConnell promising to make it his priority to deny the President a third term, with the underlying words, “What does this mean for you?”

Besides striking an emotional chord with Kentucky’s voters, her charge has the side benefit of being true. Mitch McConnell embodies what voters of all parties hate about Washington—the inability to compromise, to sacrifice, the hypocrisy, and above all the cynicism. In an amazing moment of candor, McConnell has been caught on videotape acknowledging that his biggest priority was not to help put Americans back to work, but rather to put our president out of work.

But that’s not all.

George Bush’s memoir Decision Points paints, probably unwittingly, a grim picture of McConnell. According to Bush’s recollection, the senator visited him in 2006 to give him a blunt assessment of the political landscape. “Mr. President,” McConnell began. “Your unpopularity is going to cost us both houses of Congress.”

McConnell’s request, according to Bush, was that he give the order to withdraw all troops or at least a substantial number out of Iraq in time for the looming November elections. It was a shocking request, and hypocritical too; it was made at the same time that McConnell was blasting Democrats for favoring “surrender” in Iraq and a withdrawal he claimed would only embolden terrorists. But while he was blasting this policy in public, he was lobbying for it in private, for no reason other than his own political gain.

He denies it, of course. His spokesman says George Bush misremembered the purpose of the meeting. But the story is believable to me. It fits the trend of a dozen other plot points of McConnell’s career: cynical, disingenuous and ever-calculating.

And now, Kentuckians are faced with a choice. In light of this incredible cynicism, the brand of poison politics introduced to the modern era by Newt Gingrich and currently being refined by Mitch McConnell, Kentuckians are in the position to listen to McConnell’s case for a seventh term and ask themselves: are we better tan this?

At the moment, it looks like they are. A flurry of polls have been released on the state of the race, and while it’s close, Grimes has established a lead that’s well within the margin of error. She can usually muster 45 percent of the vote, with McConnell trailing slightly behind. Of course, it’s one thing in Kentucky for a Democrat to reach 45 percent. Getting to 50 percent plus one is the challenge.

National observers look at the race and notice McConnell’s atrocious approval ratings, but the tendency is to shrug them off. “He’s Mitch McConnell,” they say. “He’s an institution there. And it’s Kentucky.”

Both are true. Kentucky doesn’t send Democrats to the Senate these days. And Obama will be a weight around Grimes’ neck, as McConnell spares no expense in airing ads tarnishing her as just another pawn of the liberal Democratic elite.

It may just be wishful thinking, but I don’t think Kentuckians will fall for it. Bill Clinton—the last Democrat to carry Kentucky twice—will be out in force, reminding voters as only Bill Clinton can about what is at stake for them. “It’ll be long,” Clinton says of the fight ahead in his endorsement video. “It’ll be hard. But you can win it.”

Of course, it’s one thing for a tough race to be winnable on paper. Many millions more will be spent, many more attack ads will be aired. Six months is an eternity in politics.

But for now, it looks like Allison Grimes may force this septuagenarian into involuntary retirement. Of the 33 Senate challengers running in 2014, no one could do our democracy a greater service.

If you want to learn about the FBI’s investigation of the Las Vegas Massacre you will have to pay $3,000 and travel to California 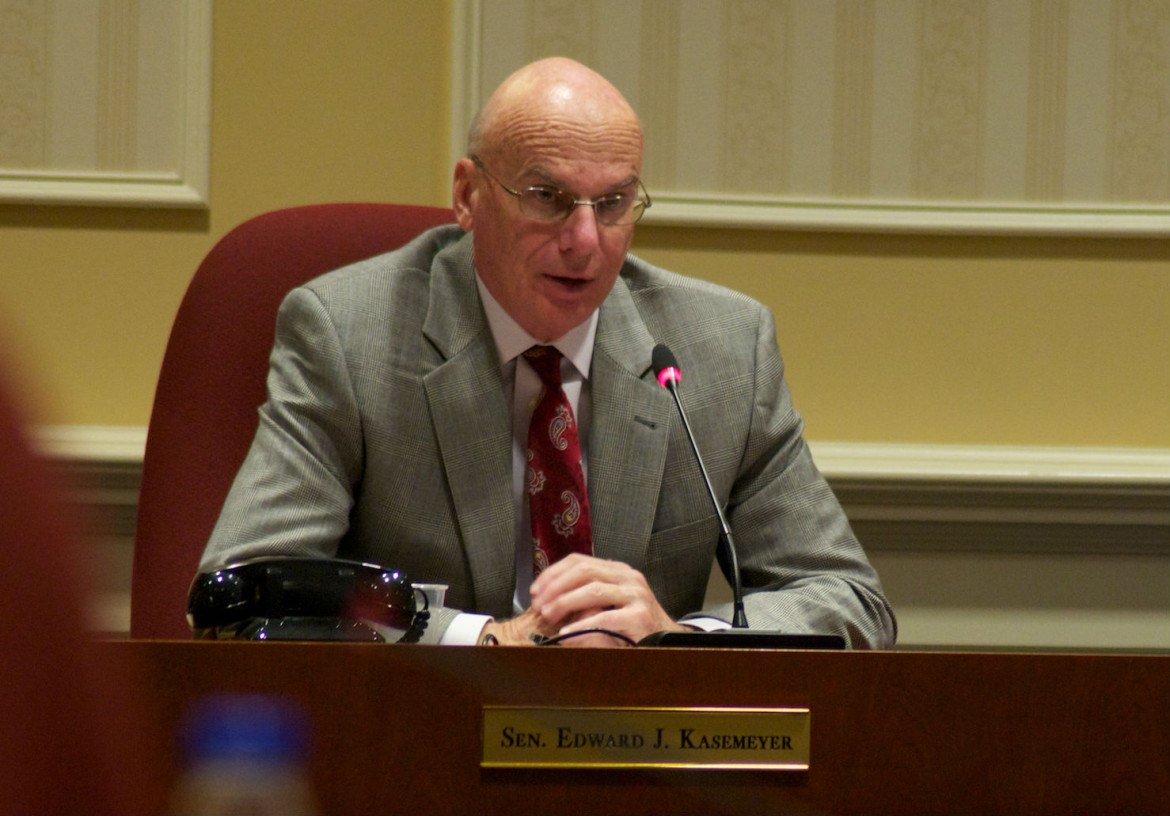