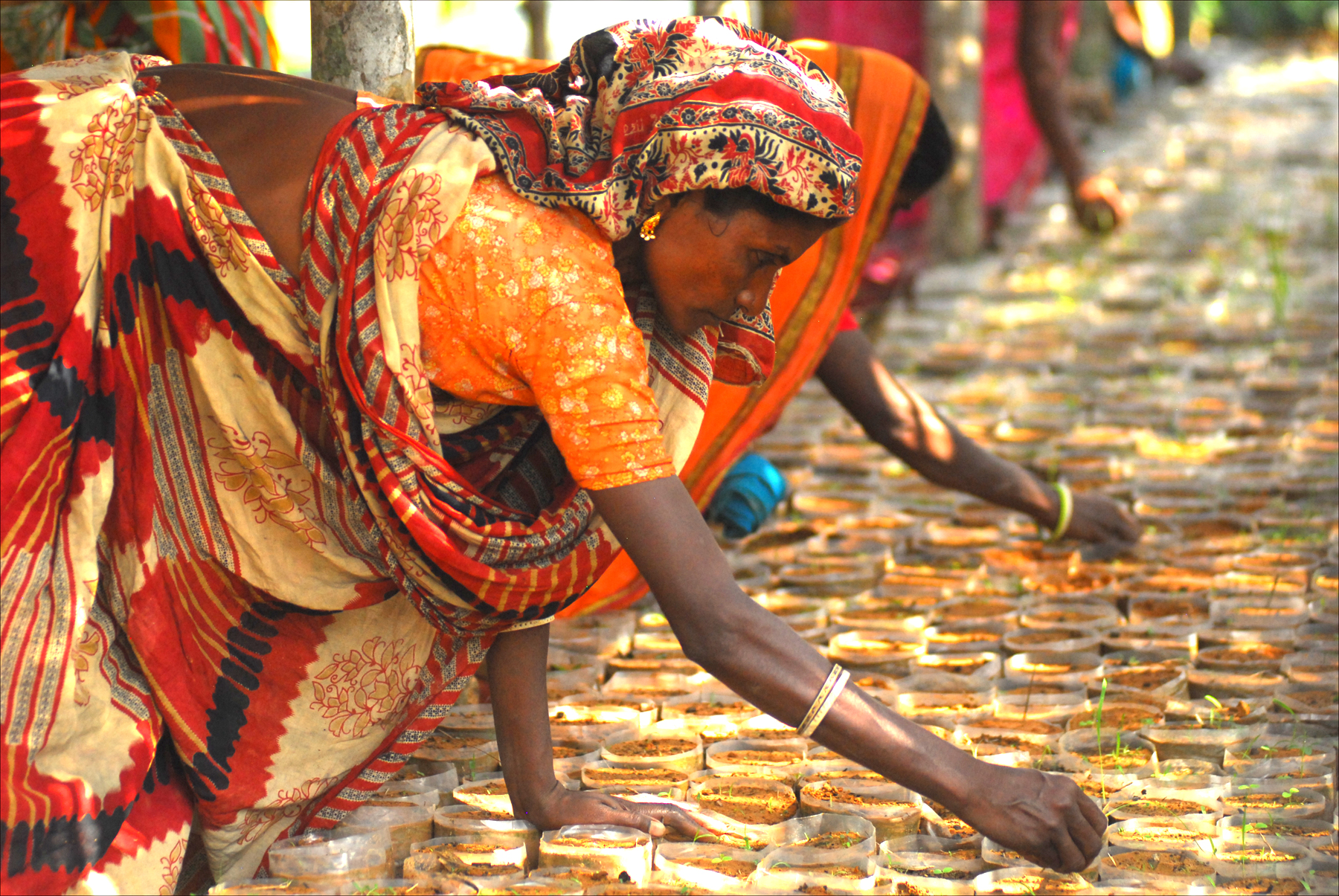 This is the last in a three-article series on labor conditions in Bangladesh by Larry Luxner, a freelance journalist based in the Washington, D.C., area. Luxner spent 11 days in Bangladesh earlier this year as a guest of the country’s Ministry of Foreign Affairs. To read the entire series click here.

DHAKA — Srimangal is often called the “tea capital of Bangladesh” — and the town even has a monument to prove it. Along the winding two-lane road that connects this remote village to the border with India, less than 25 kilometers away, stands an imposing sculpture of “Chaa-Konya” — the Tea Girl.

Erected two years ago, the statue depicts a young woman plucking tea leaves in time-honored tradition. The tea bushes flourish atop a marble pedestal which, in elaborate Bengali script, pays tribute to one of this country’s most traditional export industries.

In 2002, Bangladesh was among the world’s top tea-exporting nations, and in production it ranked ninth, behind India, China, Sri Lanka, Kenya, Indonesia, Turkey, Japan and Vietnam. Yet today, with domestic demand growing and production stagnant, Bangladesh barely exports any tea at all.

This correspondent recently spent 11 days in this teeming South Asian republic, traveling with a group of foreign journalists from the capital of Dhaka (population 12 million) south to the crowded port of Chittagong, then to the Indian Ocean beach resort of Cox’s Bazar and finally northeast to the heart of Bangladesh’s tea-growing region.

Everywhere we went, we saw people drinking tea. Not surprising, since annual per-capita consumption here now stands at 500 grams, up from only 100 grams a generation ago. With 158 million inhabitants crowded into a country the size of Florida — making Bangladesh the most densely populated nation on Earth — that’s a lot of tea.

In fiscal 2011, Bangladesh generated $23 billion in export revenue, a 41 percent jump over the previous year. Apparel alone represented 78 percent of that total, with jute, frozen shrimp, leather products and footwear comprising most of the remainder.

Surprisingly, nowhere is tea mentioned as an export — nor is tea even on the radar screen of Suvashish Bose, vice-chairman of the Export Promotion Bureau, a division of the country’s Ministry of Commerce.

“We cannot export tea, because domestic consumption is very high nowadays. Every family drinks tea,” Bose told us from his Dhaka office. “Wherever you go, you will be served tea, and production in the tea gardens has not increased much. Some of these tea plants are 60 or 70 years old and they haven’t been replaced with new plants.”

By comparison, Sri Lanka — with only 20 million people — specializes in blends, and has become one of the world’s top tea exporters.

Another problem, he said, is that the number of tea gardens has remained stagnant at 152, and that these gardens are very old. “Tea gardens have become a status symbol for some people,” Bose told us. “If you have a tea garden in Bangladesh, it means you’re very high up in society — but you’re not really investing in that tea garden with the objective of exporting to the rest of the world.”

At the Sathgao Tea Estate located nine kilometers west of Srimangal, our guide was manager Rafiqul Islam, who lives on the premises with his wife and two daughters; a son is studying in England.

Islam, 52, has spent 25 years here. He and his three assistant managers oversee 1,600 workers and 1,300 hectares of land — 600 hectares of which are cultivated with tea. The estate straddles the border between Moulvibazar and Habiganj, the two main tea-producing districts in Bangladesh.

Most of the laborers on the Sathgao Tea Estate are Hindu, which make them a distinct religious minority in a country that’s 90 percent Muslim. Like their counterparts in Sri Lanka and India, the pluckers are all women, and they start their six-hour workday at 7 a.m., clad in colorful saris and carying their sacks over their shoulders.

That amounts to blatant exploitation, argues Philip Gain, director of the Dhaka-based Society for Environment and Human Development. He says tea workers are among the most marginalized and excluded people in Bangladesh — earning far less than their counterparts just over the border in India.

“Unfortunately they remain socially excluded, low-paid, overwhelmingly illiterate, deprived and disconnected,” according to Gain. “Without fertilization of minds, they have lost dignity in their lives. These are perfect conditions for the profiteers to continue exploitation of the tea workers. Deprived, exploited an alienated, the majority of tea workers live an inhuman life.”

Gain, writing in The Daily Star — a Bangladeshi newspaper published in Dhaka — said that as citizens of Bangladesh, the tea workers are free to live anywhere in the country they choose. “But the reality is that many of them have never stepped out of the tea gardens. Social and economic exclusion, dispossession and the treatment they get from their management and Bengali neighbors have rendered them captive laborers.”

Ardashir Kabir, the estate’s owner and senior vice-president of the Bangladesh Tea Association, counters that his workers enjoy substantially better lives than their counterparts in the garment industry, who toil long hours in factories in Chittagong and Dhaka and are sometimes physically and sexually abused by their employers.

“Compare us to the standard of living of the average villager, who’s a landless peasant. Or the garment factory girl who lives in a slum, gets her minimum wage and leaves after a solid shift of eight hours. Whether she lives or dies, or is raped on the way home, is nobody’s bloody headache,” he said during an interview in Dhaka. “But not in our case. Our managers are more like their fathers and mothers. We protect them from outsiders. Our workers live on the estate and consider that their eternal home.”

Kabir, whose name, incidentally, is engraved on the roadside Chaa-Konya statue, ticks off the benefits Sathgao Tea Estate offers its many workers.

“Each permanent laborer family is entitled to one house, with electricity, water, latrines, fuel and a certain amount of land around the house to keep their livestock,” the executive said in his clipped British accent, the result of his education at Cambridge and the London School of Economics. “Their houses are completely rent-free, their land is rent-free, and we provide medical care and subsidized wheat and rice rations.”

Nearby, at the thatched-roof, Makhterra Primary School, teacher Siteth Kurmi watches over his 4- and 5-year-old pupils as they sit cross-legged on the floor, learning their lessons. The one-room schoolhouse, attended by 76 children in two shifts, was built by the Sathgao Tea Estate in 2009. It’s one of several schools in the area.

Thanks to all these benefits, says Kabir, the tea industry rarely sees labor disputes.

“Local flareups are generally because of political influences from outside, but nationwide, we have never had a strike in the tea industry,” said Kabir, adding that — unlike their free-zone  — tea workers do have the right to strike. “We have extremely strong labor unions. We negotiate wages with the tea association on behalf of all the workers within the purview of the law in Bangladesh.”

The Bangladesh Tea Association dates from the time the country’s oldest estate was set up in the 1840s in the Chandghani Hills of Sylhet. The first commercial tea plantation was established in 1857 in nearby Mulnichera. Nearly a century later, in 1947, the British partitioned the Indian subcontinent into mostly Hindu India and predominantly Muslim Pakistan, with East Pakistan eventually becoming Bangladesh.

Today the country has 168 tea estates — mostly in Sylhet and Chittagong, with smallholdings in Panchagarh, on the border with India. The estates, which by law must be members of the Bangladesh Tea Association, vary in size from 500 to 5,000 acres.

“Our internal demand has pushed up the price for good and medium-quality teas to the point where it’s still worth bringing in cheaper-quality teas from somewhere else,” said Kabir.

Between 1985 and 1990, Bangladesh exported up to 90 percent of its tea, with major customers including Pakistan, Afghanistan and the former Soviet Union.

Yet due to a jump in domestic tea consumption, Bangladesh now exports only to Pakistan, Kazakhstan and Uzbekistan. If demand keeps rising at 3 percent a year, the country will need to import 20 million kilos of tea annually just to meet internal demand.

A much bigger problem, however, is climate change — one that will affect not only tea pickers but poor people throughout this geographically unlucky country.

Bangladesh, often called the “ground zero” of global warming, could find up to a third of its land area under water if greenhouse-gas emissions force temperatures up by more than 2 degrees Celsius, causing the seas to rise.

Army troops have already laid thousands of sandbags along the southern coast of Bangladesh near Cox’s Bazar to prevent the coastal highway from being washed away. And the country’s top scientists warn of the specter of millions of climate refugees streaming into neighboring India in the event floods and droughts get worse.

“We are already finding that the rainfall patterns have changed,” Kabir said. “We have records going back 100 years. In the old days, we would assume there’d be a minor drought once every four or five years. These days, we have almost drought-like conditions early season and late season. We’re never sure whether the rains will continue in October. This is critical.”

Waiting to get going

Burn-In: Author Says AI May Be Edging World Closer to a Dystopian Future