Our third day in Ushuaia, we got up early and joined a group of forty on a boat and headed out into the Beagle Channel. The channel is 130 miles long and about three miles at its widest point. It is one of the three passages from the Atlantic to the Pacific Ocean. The other two are the Straits of Magellan to the north of Tierra del Fuego and Drake Passage to the south between South America and Antarctica. Antarctica is about 620 miles south of Ushuaia.

We passed three islands on our way to Harberton Ranch. The first island was teeming with Cormorant birds. They were black and white and looked kind of like penguins from a distance but these birds could fly. Seal Island was really just a big rock covered with sea lions. It was fun to watch the babies trying to climb up the rocks and sliding down them. The parents provided lots of encouragement. The last island was Les Eclaireurs Lighthouse. It was 36 feet high and powered with solar panels.

Thomas Bridges was an orphan found on a bridge in England and adopted by an Anglican missionary. At 13, he moved to the Falkland (Malvinas) Islands where he learned to speak the language of the native Yamana people. He founded an Anglican Mission in Ushuaia in 1870 and in 1886, he became an Argentine citizen. The government gave him a piece of land 40 miles east of Ushuaia in recognition of his work with the Yamana and his help with shipwrecked sailors. He named the ranch after his wife’s birthplace in England. Harburton was originally a 50,000 acre sheep and cattle ranch. It housed the first store in the area, providing imported goods and supplies.

Today Harbuton is open to the public from October to March. It still has some cattle but is mainly a tourist stop. It is still owned by the family and was declared an Argentine National Historic Monument in 1999.

The Acatushun Museum is on the grounds. It is a working museum and research laboratory started by Natalie Goodall, the wife of the estate’s manager. Biology and veterinarian students collect specimens and do research on marine animals as well as give guided tours through the small museum.

After docking and having a quick lunch, we were split into two groups of twenty each. We were in the first group so we boarded a smaller boat to travel to Isla Yecapasela (Isla Martillo). It looked like a nasty storm was coming in and the wind was fierce. I was a little apprehensive as we set off on our 15 minute boat trip among the white caps.

Originally the Bridges family had sheep and some cattle on this island but in the 1960s they were removed and penguins settled there. Now there are about 10,000 Magellanic penguins on the island and about 40 Gentoo penguins. The Gentoo are the taller penguins that are found in Antarctica. The Magellanic ones live mostly on the southern coasts of Chile and Argentina. The birds arrive in October to breed and once the chicks molt their feathers in late March, they move north. When we were there in late December, the chicks were about a month old.

We docked on the beach and saw penguins going off into the water to feed and coming out of the water to rest from their swim. In keeping with the weather of the area, the sun came out but the wind was still going strong. This was probably a good thing as the bird smells could have been pretty strong.

As we moved further into the island, there was a trail marked off by ropes. We were told to be quiet and stay on the trail. We were not to interact with the penguins if at all possible. Along the trail a couple of penguins decided to sit down in the middle of the path so we were forced to stay in one spot and wait for them to move on. They were in no hurry. Most of the babies were in their nests, shallow holes dug into the ground. Some were screaming for food, others were just milling about.

Scientists are studying these penguins and part of the study is to measure the effect of humans on penguins. We were limited to a small part of the island and only with the Magellanic penguins. We could watch the Gentoo penguins from afar. The general access was also limited and only one tour company, Piratour, had the concession to take people on the island. Reservations should be made far in advance.

The experience was magical. The chicks were so cute and fluffy and there were so many of them. It was something I will not soon forget.

Back at the ranch we boarded busses for the trip back to town. On the way we stopped to see the Flag Trees. These are trees that are constantly battered by the wind and grow in a peculiar way. The view from there was amazing.

It was a long day and we were tired. We had reservations at a French restaurant, Chez Manu, which was further up the mountain from our hotel. The view from there was incredible as well. Actually the view from anywhere was good. After living on the Chesapeake Bay for many years, I grew very fond of the blue crab. In Ushuaia the Centolla or Southern King Crab was very popular and fresh out of the bay. It was often prepared in small casseroles made with cream, garlic and cheeses. I had the King Crab Au Gratin at Chez Manu. It was very good but I still liked the blue crab best.

The following day we took a trip into the National Park, a beautiful place full of glacial lakes, woods, camp grounds, hiking trails, and peat moss. We took a short hike along a stream and had a nice conversation with our guide. He was about 25 years old and had lived in Ushuaia most of his life. His parents moved from Cordoba, Argentina when he was about four years old in order to find jobs in the electronics factory. He told us the Argentine government provides a stipend to people who agree to live ‘at the end of the world’. Apparently it is difficult to get people to live there permanently.

We had hoped to go to the Yamana Museum to see the dioramas and learn about the indigenous people of the area. Unfortunately it was closed. Our guide was happy to tell us about them. They wore no clothes at all. All their food and resources with the exception of wood for their boats, came from the water. They stayed warm by building fires along the shore and inside their boats. Hence the name, Tierra del Fuego, Land of Fire. Because it rained so much and they spent so much time in the water, they could never keep clothes dry. Instead they rubbed fish oil on their bodies and built fires to keep themselves warm and dry. The Yamana are virtually extinct today. The diseases and the cultural changes the white men brought rubbed them out in a relatively short period of time.

We stopped a few times on our trip through the park. One stop was the exact spot where the Pan American Highway ended, 11,000 miles from Alaska. Huge photo opportunity. We also stopped to take a closer look at the abundant peat moss in the area.

There was a big beautiful visitor’s center right on a lake in the middle of the mountains. They had a cafeteria with empanadas among other things so we tried the crab, the lamb, and the beef empanadas. We pretty consistently liked the lamb ones the best. We had beef and lamb ones for our New Year’s Eve dinner in our hotel room back in Buenos Aires.

Stay tuned for the final episode. 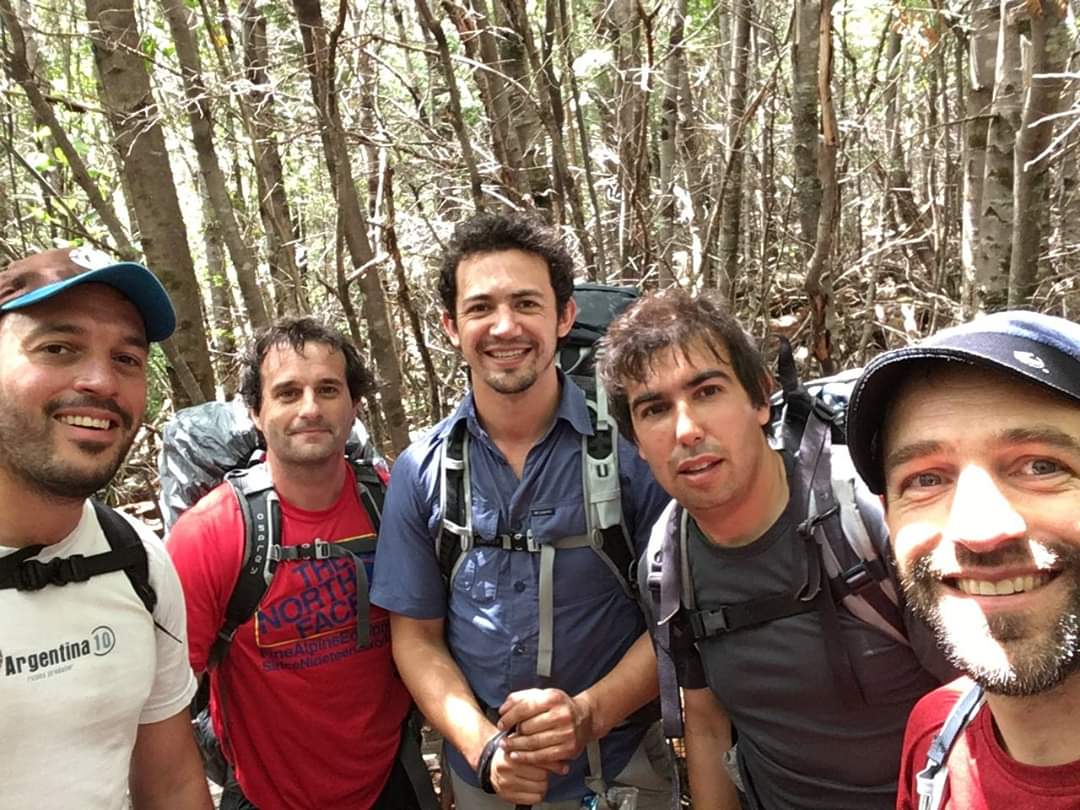