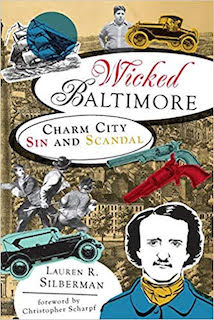 Lauren R. Silberman’s offering from her Muse is a delightful read, thoroughly documented, and a real winner of a book. First published in 2011, its full title is: “Wicked Baltimore: Charm City Sin and Scandal.”

Her tome covers Baltimore as a “wicked place” from the beginning of the eighteenth century to about the time “Prohibition ended in 1933.” She praises its inhabitants for embracing their moniker of “Mobtown.” And, she also gives examples of its openness to its sordid past rather than, like some cities, hiding and running away from it. (Yea, you go, Baltimore!)

Silberman gives a nod, for example, to how the locals have embraced the “scandalous” films of John Waters and for also holding a festival honoring the “privateers of yesteryear.” (By way of full disclosure, yours truly was in four of Waters’ flicks, including my fave, “Pecker,” where I was casted against type as “The Wild Man of 22nd Street.”)

Besides being a very good story-teller, Silberman is also a pretty darn good researcher. She had to dig into the history books via the Enoch Pratt Free Library and the Maryland Historical Society –  just to mention two of her primary sources.

One of the other things I liked about her book is how Silberman added photographs to help bring her tales to life. On some of the photos, she had to diligently search the long-buried files of the Library of Congress – among other sources.

Silberman’s book opens with a chapter on a flakey newspaper owner –  William Goddard. His paper was called the “Maryland Journal.” In 1777, it published a letter to the editor that was critical of General George Washington. It was really a dumb and dishonest thing to do. It was also full of damnable lies.

The “Baltimore Mob” was ready to hang Goddard and who could blame them. It turned out he was in cahoots with a General Charles Lee, who Washington had demoted for his cowardly conduct in the “Battle of Long Island.”

Goddard wasn’t welcomed in Baltimore and he did the wise thing. He soon left the city “for Rhode Island.”

Next up for Silberman’s examination is Betsy Patterson Bonaparte. She was a Baltimore socialite, who became enamored with Napoleon’s brother, Jerome. Although Betsy’s relationship with Jerome didn’t work out. She had the last laugh and Silberman explains why.

Here is something I didn’t know – the Maryland Penitentiary, which opened in 1911, is the “oldest operating penitentiary in the country – and probably in the world!”

In August, 1920, there was “a riot over monotonous food.” Over 700 prisoners took part in the uprising. The battle lasted over five hours “before peace was restored,” the author wrote.

Silberman relates the tale of Jack Hart, who was one of the greatest “escape artist” in the penitentiary’s history. In 1929, Hart managed to get through three of his “solidarity confinement locks.” He escaped down the roof on the Eager Street side of the prison “using a rope and bedsheet.” It took “four years before he was recaptured in Chicago.”

The author informs us that the moniker for Baltimore of “Mobtown” dates back to 1808. It involved the hated British who had just imposed higher taxes on the locals. They had also placed “a cargo tax on720 gallons of Geneva gin,” which was found on the vessel – “Sophia.”

When the ship hit port, the locals rioted. As the band played “Yankee Doodle,” the mob unloaded the gin from the vessel and burn it.

When the war of 1812-14 against the British started, a local newspaper, the “Federal Republican,” openly “condemned it.” The response was quick. The owner, Alexander Contee Hanson’s workplace, was destroyed and one of his employees was killed. Hanson was lucky to escape “Mobtown” with his life.

During the Revolutionary War, Baltimore was referred to by the British as a “nest of pirates.” Little change by the time of the War of 1812-14. Then, the “famed privateer” Thomas Boyle called Fells Point home. Silberman details many of his exploits. One of Boyle’s ships he championed went on to be known as the “Pride of Baltimore.” The author underscored how its replica, “Pride of Baltimore, II,” sails out of Baltimore’s Inner Harbor today.

In her very interesting book, Silberman also finds room to chronicle some of the stories connected to legends such as Frederick Douglas and Edgar Allan Poe. She also puts a spotlight on some Catholic-hating bigots, who were associated with an extreme right-wing clique – the notorious – “Know-Nothings.”

Silberman finishes up her book with chapters on a host of other happenings associated with Baltimore and its reputation. Some of her tales are well known, others aren’t. They all contribute to Baltimore once having standing as a “wicked city” saturated with scandals of all sorts.

I’m giving Silberman four out of five stars for her excellent, and highly-entertaining, literary effort.

Jealousy can still hit you even after a year of dating

One thought on “Wicked Baltimore – A Book by Lauren R. Silberman Is a Winner! (Book Review)”