WASHINGTON – A full-scale war between the U.S. and Iran would be a bloody conflict with repercussions that extend far beyond that country’s borders, foreign policy analysts told TMN.

“A war full-scale war with Iran could be the deadliest conflict the planet has seen since the end of World War II,” said Harry Kazianis, who is director of Defense Studies at the Center for the National Interest in Washington, D.C.

He added: “While Iran’s military can’t compete with America, she does have enough missiles and forces to sink U.S. Navy aircraft carriers station nearby, attack U.S. bases all over the Middle East and cause large amount off casualties in the event that a ground invasion was given a green-light. It would make the Second Iraq War in 2003 look small by comparison.”

Dan Gabriel, a former CIA counter-terrorism officer who served tours in Iraq and Afghanistan, said Iran’s network of terrorist proxies would likely come to the aid of the regime.

“It is safe to say that any conflict with Iran would not be confined to Iranian territory.”

Gabriel added: “Over the past decade, Iran has expanded its reach and presence across the Middle East via a network of proxies: Hezbollah in Lebanon, the Houthis in Yemen, support to the Assad regime in Syria, and sponsorship of the Popular Mobilization Forces that helped to defeat the ISIS caliphate in Iraq and Syria. So, Iran has all these allies or proxies in the region that they are able to call upon to conduct military operations against US interests and those of our allies.”

Asked about the likelihood of war, Gabriel said: “Although I’m hopeful that conflict can be avoided, it’s clear that tensions between the US and Iran are at the highest point in decades. To put this in perspective, the last publicly acknowledged military action against Iran was under Jimmy Carter.”

“The chances of a military confrontation are the highest they have been since the late 1980s.”

President Donald Trump called off a planned Friday morning strike against Iranian military targets ten minutes before it was to begin. Trump said carrying out a strike in retaliation for the shooting down of an unmanned U.S. surveillance drone would not have been a “proportionate” response. The drone was shot down on Thursday morning.

The incident led to bipartisan calls for some sort of action against Iran.

This weekend Trump announced that the U.S. will place additional sanctions on Tehran effective Monday.

Iran is the world’s largest state-sponsor of terrorism.

Last year the U.S. withdrew from a five-nation nuclear accord with Iran.

The agreement places temporary restrictions on Iran’s ability to enrich uranium, in exchange for sanctions relief. It does not restrict the regime’s ability to manufacture and test ballistic missiles, nor does it compel Tehran to cease support for terrorism.

Iran has said it too intends to withdrawal from the agreement. 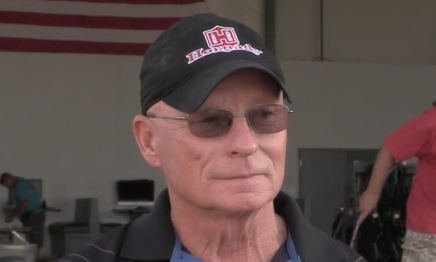 Lombardo: Paddock’s motive unknown and may remain so