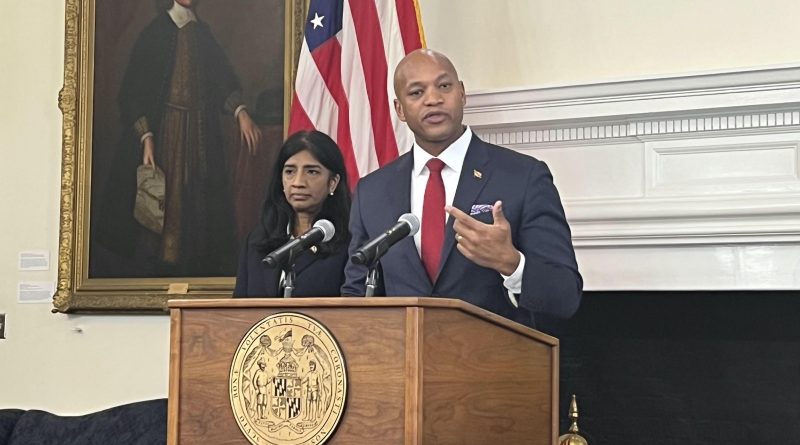 “This is the most ambitious budget that you will see for a first year of an administration in recent history. But I think in this budget, we also show that you can be bold without being reckless,” said Moore. “This budget that you will see is not only a summation of our values, it’s strategic. It prepares us to weather the downside risk in the larger economy. But it also makes long-needed investments to position us for long-term growth.”

The governor also emphasized that there are no tax increases in his fiscal year 2024, $63 billion budget. He also said the document recognizes the current economic realities – a sagging stock market, high inflation rate and a possible recession – and maintains the state’s fiscal responsibility.

The budget sticks with the legislature’s and Spending Affordability Committee’s Rainy Day Fund target of 10 percent of General Fund revenue, Moore said, adding, “This budget also preserves a very healthy surplus, which we will, thoughtfully and in partnership, deploy and reserve after assessing the economic climate to achieve our state’s most pressing needs and most pressing issues.”

The budget boosts Maryland’s education system, including devoting $500 million from cash reserves to the Blueprint for Maryland’s Future Fund. This fund, passed by the Maryland General Assembly in 2021, is a transformative 10-year plan for the public education system that increases education funding. It focuses on expanding access to early childhood education, more preparation for college and career readiness, increasing the standards and diversity of school staff, and generally providing more resources aimed at student success.

Other proposed educational investments include $8.8 billion for K-12 education, a 32% increase in funding to boost low-income pupils, $15 million to improve teacher recruitment and retention, as well as $1.1 billion for school construction.

“We have said educational support is going to be the pathway in order for our state’s long-term success to actually take flight. We want to make sure that all of our students, both young and young-at-heart students, are prepared for the economy that Maryland is producing,” said Moore.

The new governor also set his sights on building a robust economy, specifically allocating $500 million from Maryland’s surplus to a variety of transportation-based projects statewide.

“When we’re talking about transportation, you cannot have economic mobility if you don’t have physical mobility,” said Moore. “So we’re making sure that we are creating pathways for people to go from where they live to where opportunities lie.”

Moore’s final point of budgetary emphasis revolves around addressing and ending child poverty. According to his administration, one in eight children grows up in poverty in Maryland.

To tackle that problem, his proposal invests $218 million into raising the minimum wage to $15 per hour, including consideration of inflation in recent years. It also includes $171 million to expand both the Earned Income Tax Credit and the Child Tax Credit. According to the Moore administration, such programs are linked to improved children’s health, reduced crime rates and alleviation of childhood poverty.

“This budget positions Maryland to build a competitive, thriving and deeply rooted economy,” said Moore. “That includes everyone, while advancing the critical priorities of education, health and the environment.”

Moore has only been in office since Wednesday’s inauguration, but he’s emphasized collaboration since his election.  The General Assembly will need to approve the budget before its session ends in April. Moore’s collaborative message continued into Friday as he hosted a legislative breakfast to discuss his budget plan, something that wasn’t done in the past few years. Its return caught the attention of legislators, who feel it represents a deviation from the Hogan administration, said Sen. Guy Guzzone, D-Howard.

“We spent eight years where we were not receiving opinions about legislation. We weren’t working in a cooperative fashion with the agencies to get things accomplished,” said Guzzone, who has served as chairman of the Budget and Taxation Committee since 2020. “We can get a lot done together. We won’t be using the tools that we used in the past (to fence off funding)…We’ll be working together to make things happen and that’s how I predict the rest of the session.”

“It was very, very collaborative and I thought very much in line with the largely shared values that we have with the administration coming in. There’s a lot of room left in the budget for ongoing work and that makes a lot of sense with new secretaries, with new personnel, with the rebuilding of a refreshed government,” Ferguson said. “There is a lot of opportunity during the session to really dig into some of the things that we need to invest in moving forward and the budget, from my perspective.”

The Blueprint for Maryland’s Future has been touted as the key to Maryland’s student’s future, so the Maryland State Education Association said it was happy to see funding to keep the program solvent.

“Governor Moore’s budget marks the beginning of a new era of commitment and leadership to ensure that every student has an outstanding public school where they can pursue their dreams,” said Cheryl Bost, a fourth and fifth grade teacher in Baltimore County and president of the Maryland State Education Association. “He upholds his promise to support students and educators by fully funding the FY24 state share of the Blueprint for Maryland’s Future, which will expand career and technical education programs and pre-kindergarten, address educator shortages, and raise educator pay.”

Vox’s attack on Sanders is an attack on women, too