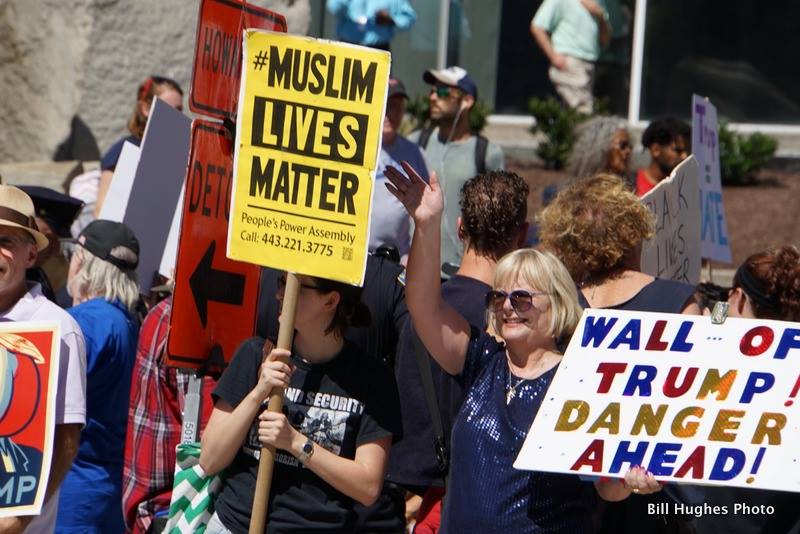 Protests erupted outside of Baltimore Convention Center as Trump took to the stage.

In the 5-4 ruling, the court rejected challengers’ assertions that the third iteration of Trump’s travel ban unconstitutionally discriminates against Muslims and exceeds the executive authority granted to the president by Congress.

The decision marks a major victory for Trump, who has repeatedly invoked national security as the rationale for restricting who comes into the United States.

“The Proclamation is squarely within the scope of Presidential authority,” Chief Justice John G. Roberts wrote in the majority opinion.

“The government has set forth a sufficient national security justification” to impose the travel restrictions, Roberts wrote.

But the chief justice added: “We express no view on the soundness of the policy. We simply hold today that plaintiffs have not demonstrated a likelihood of success on the merits of their constitutional claim.”

The plaintiffs, including the state of Hawaii, had argued Trump’s repeated anti-Muslim statements, dating to his days on the campaign trail,  demonstrated that his animus toward Muslim’s motivated all three travel bans the president had imposed. That bias, the challengers argued, violated the Establishment Clause, forbidding the government to favor one religion over another.

But Roberts rejected that argument.

“Plaintiffs argue that this President’s words strike at fundamental standards of respect and tolerance, in violation of our constitutional tradition,” the chief justice wrote. “But the issue before us is not whether to denounce the statements. It is instead the significance of those statements in reviewing a Presidential directive, neutral on its face, addressing a matter within the core of executive responsibility. In doing so, we must consider not only the statements of a particular President, but also the authority of the Presidency itself.”

Sotomayor wrote that the travel ban clearly discriminates against Muslims in violation of the Establishment clause.

“The majority holds otherwise by ignoring the facts, misconstruing our legal precedent, and turning a blind eye to the pain and suffering the Proclamation inflicts upon countless families and individuals, many of whom are United States citizens,” she wrote.

She said the majority “completely sets aside the President’s charged statements about Muslims as irrelevant. That holding erodes the foundational principles of religious tolerance that the court elsewhere has so emphatically protected, and it tells members of minority religions in our country ‘that they are outsiders, not full members of the political community.'”

Sotomayor accused the justices who upheld the travel ban of “ignoring the facts, misconstruing our legal precedent, and turning a blind eye to the pain and suffering the Proclamation inflicts upon countless families and individuals, many of whom are United States citizens.”

In May, the 4th U.S. Circuit Court of Appeals in Richmond blocked the latest travel ban, ruling it “drips with religious intolerance, animus and discrimination.” The following month, the 9th U.S. Circuit in San Francisco ruled Trump had exceeded his executive authority.

But in December, the Supreme Court let the latest iteration of Trump’s travel ban take effect until justices weighed its merits.

Md. legislators get high marks from consumer group — but not GOP