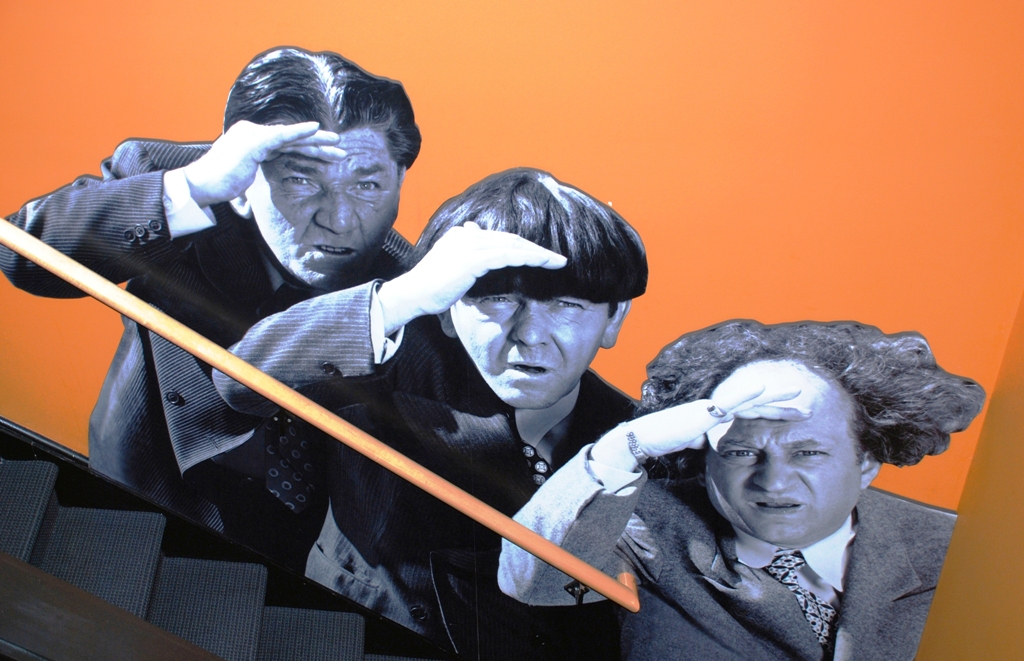 AMBLER, PA — For nearly a decade, Kate Bugglen met almost every celebrity who came to Baltimore. As a front desk clerk and reservations manager for the Lord Baltimore Hotel in the 1950s, it was Kate’s job to see that these important guests were catered to in style. So, when I asked Kate, during a luncheon in her honor last January, what celebrity stood out in her mind after all of these years, her mirthful answer could have knocked me over with a feather.

Oooops! Let me rephrase that:

Her answer hit me like a monkey wrench across my cranium.

“Oh, I’d have to say the Three Stooges. They were so funny,” recalled Kate, “I just can’t explain. The things they were doing out front in the lobby with the people were just unbelievable. Of all the guests I signed in, they are the ones who still come to mind.”

The Three Stooges may have all passed on to that great slapstick party in the sky, but the trio remains an unmistakably unique part of the patchwork fabric of American comedy. So unique, in fact, that a veritable treasure trove of Stooge memorabilia currently fills three floors of a private museum in Ambler, Pennsylvania – about two hours north of Baltimore.

Aptly named the Stoogeum, the 100,000-piece artifact compendium was amassed by private collector, Gary Lassin. The collection is housed in a fully-accessible 10,000 square foot building in a quiet office complex.

Wait – how does one man collect 100,000 pieces of Stooge memorabilia?

Lassin was not at the Stoogeum the day we dropped in for a visit, so I put that question to facility archivist, Erin Smith.

“Gary always jokes that, if he had met a person who enjoyed baseball, he’d have a baseball card collection. Instead, he met his wife, who happens to be the grand-niece of Larry Fine. That kind of kicked off his collecting. Gary said that growing up, he was always a fan of the Three Stooges. But meeting his wife set him off collecting.

“Gary’s been accumulating Stooge memorabilia for forty years, now. This museum is the result of all of that collecting.”

Given his wife’s kinship, we asked if some of the collection came directly from Fine family sources?

“Yes. Larry’s brother was named Moe – Moe Feinberg – so Gary inherited some things from him. Gary has contact with other Fine family members, as well as various members of the Howard family. But over the years, he did a lot of hunting and attending swap meets. Of course, now with ebay, those kind of searches are much easier.

“We currently have about 10,000 items on display, but what is on display is only about 10% of the total collection. The lower floor is filled with objects and posters. We have a film vault with all 190 Columbia film shorts in 16mm. We also have a collection of films in 8mm and Super 8.

“On the upper floor, in our library, we have file cabinets filled with documents. In Gary’s office, we have even more files with our still photo collection.”

How exhaustive is the collection? When Kate mentioned the Stooges visit to the Lord Baltimore Hotel, we wondered how many times the team had graced Charm City? So, we sent an inquiry to the Stoogeum and had a reply in a matter of hours.

Who knew the team had appeared in Baltimore eleven times between 1935 – 1960?

One of the questions we raised about their Baltimore appearances centered on the actual make-up of the team. As even the most casual Stooge fan knows, the team went through several incarnations throughout their nearly 50-year career. In total, there were six different players, with at least two others considered as possible replacements.

The Stooges started in Vaudeville in the 1920s, backing singing comic Ted Healy. Mainstays Moe Howard and Larry Fine were initially joined by Moe’s brother, Shemp. The act toured in that version until the early 1930s.

With success on the stage and subsequent movie deals came infighting with Healy, resulting in an exit from the act by Shemp. Healy would leave the act, too, but not before finding a replacement for Shemp. Moe suggested they recruit his outgoing younger brother, Jerry. At first Healy balked, but Jerry won him over and became known as “Curly.” The rest is comic history.

Many of the exhibits at the Stoogeum pay homage to Moe, Larry and Curly. There is artwork, advertising, assorted novelty items, hand puppets and children games. One beautiful piece on display is a ceramic cat, crafted by amateur sculptor Moe Howard. But also arrayed is memorabilia from later replacement Stooges Joe Besser and “Curly Joe” DeRita. These pieces include travel trunks, stage costumes, playbills, and DeRita’s Maryland driver’s license!

There is also a section of the museum dedicated to the work of Shemp Howard. Appropriately named, “The Hall of Shemp,” this display honors to the varied film career Shemp enjoyed after leaving the Stooges in 1932. He returned to the team in 1946, when younger brother “Curly” became terminally ill, and remained a stalwart with the Stooges until his own death in 1955.

Adjacent to the Hall of Shemp sits a 85-seat theater used for film screenings, lectures and special presentations. The Stoogeum is alson the headquarters of the 2,000-member Three Stooges Fan Club. An annual meeting of the fan club brings together Stooges relatives, supporting actors, impersonators and fans, with the Stoogeum at the hub of the event.

One additional area of note is a section dedicated to the nearly 200 unsung heroes of the Columbia shorts – the actors and actresses who played it (reasonably) straight in the Three Stooges films.

Leading the pack is Emil Sitka, who appeared in some 40 of the short subjects. Sitka was seriously considered to fill in as the second Stooge when Larry Fine’s health deteriorated in the late 1960s. Bud Jamieson, Tom Kennedy, Vernon Dent, Dudley Dickerson, Connie Cezan, Symona Boniface and Adam West (yes the Adam West) also get a heartfelt nod.

Then, there is Christine McIntyre, an operatic soprano who proved to be the perfect foil in a number of Three Stooges shorts. Her one-minute scene with Shemp in the classic “Brideless Groom” is a comedic tour-de-force, and still hilarious more than sixty-years later.

After 40 years and 100,000 artifacts, is it even remotely possible that Lassin is missing something? Better ~ is there a Holy Grail of Stooge memorabilia?

“There are still some one-sheet posters and lobby cards out there, but Gary hasn’t been willing to pay the asking price,” said Stoogeum Registrar, Michelle Squiccimara.

“There is also Larry’s violin, but I don’t think Gary has ever really wanted it, because it has a dubious provenance.

“When other people get out of the collecting game, they usually call Gary. They know that nobody else is going to give Stooge memorabilia the same kind of tender-loving care. There are other film museums, but this one is specifically for the Three Stooges.

“When we first opened, we would attract upwards of 500 people on a Saturday. It was too much, so we changed our days and hours to be more friendly to smaller tour groups, and the casual to serious Stooges fan. This museum IS a destination, and we attract people from all over the world.”

Does Lassin have a favorite piece?

“I know he likes Shemp’s 1919 discharge papers from the army,” said Michelle. “Shemp was a very nervous guy, and whatever you’ve heard about Shemp being titchy, it is all true. He didn’t drive, he didn’t like to take the train and he never flew. He was a homebody and a scaredy-cat.

“The other piece Gary is really excited about is a three-sheet poster from the early Fox talking film, ‘Rube Goldberg’s Soup to Nuts’. That is one piece which stays in his office and never goes on display. It was the Stooges first feature film appearence, though they don’t appear on the poster. Even Ted Healy isn’t really featured, so when people first see it, they usually don’t give it a second thought. But it’s a great poster, and Gary loves it. And when his guests learn the backstory, they love it, too.”

The Stoogeum is located at 904 Sheble Lane, Ambler, PA 19002. It is open every Thursday and by private appointment during the week. For more information, visit the Stoogeum. Nyuk-nyuk-nyuk.