Photo above: The Los Angeles Kings against the New York Rangers, November 17, 2013, in Madison Square Garden.
Photo is screen shot from YouTube video.

In the annals of NHL hockey history, the Los Angeles Kings are a one of a kind team. No other team, underdog or favorite, has won three straight 7-game playoff series, with the seventh and deciding game on the road — until the L.A. Kings did it this year.

In the first round the Kings were down 3-0 against the San Jose Sharks, but then they did the nearly impossible and won four straight, finishing the series in San Jose.

The Anaheim Ducks were supposed to put an end to the Kings, but the strong play of Anze Kopitar, Marian Gaborik, Justin Williams and especially Drew Doughty elevated the Kings’ game. Goalie Jonathan Quick added some epic saves and in a tough game seven, the Anaheim Ducks were sent home for the rest of the season.

No one expected the Kings good fortune to continue against the Chicago Blackhawks, the defending Stanley Cup Champions. The Hawks won the first game in Chicago, but early on in the series it looked like the Kings had it and some fans were wondering if the series was going to return to Chi-town just so the champs could have one more home game before elimination. The Kings had won games 2-4. But the Hawks played like champions, winning the next two, forcing a game seven in Chicago.

The Hawks and Kings battled to a 4-4 tie at the end of regulation, so it went to overtime. The hallmark feature of the Kings’ game plan all season and especially in the playoffs has been an unrelenting attack on the net with all players surrounding the net, swatting the puck towards the goal until the opposing team either got it away from the Kings or the Kings scored a goal. When they really needed it, the Kings scored that goal, as they did in the game seven overtime win.

It was a tough round for the Kings, the hardest of the three and none of them were easy — not San Jose, or Anaheim and definitely not Chicago. And to think, they weren’t even predicted to make the playoffs.

The New York Rangers had a similar ride to the Stanley Cup Finals. Although they were the favored team in their first series against the Philadelphia Flyers, they had to play seven games, with the Flyers and Rangers trading wins. The Rangers won the first and last games of the series at home.

Then they had to face the Pittsburgh Penguins, starting the series on the road. The Rangers won that first game, but then dropped three in a row to the Penguins. Goalie Marc-Andre Fleury shut out the Rangers in games two and three, giving everyone the impression the Rangers were done, even if they were able to score on Fleury again.

The Rangers played incredible defense in those final three games, but it was the game controlling play of goalie Henrik Lundqvist that really won the series for New York.

When they met the Montreal Canadiens in Canada for game one they dominated the game, scoring seven goals to the Canadiens’ 2.  The Rangers won game two as well and taking away Montreal’s home ice advantage proved to be pivotal. The series only went to six games, with the Rangers winning their final game of the series at home in Madison Square Garden.

Now two well-matched teams are set to meet in the Stanley Cup Finals, two teams that have come from behind to win their respective playoff series. The only advantages anyone sees for the Rangers is that they only played 20 games in the playoffs and the Kings played 21, the last with an overtime. Henrik Lundqvist has looked a little sharper as a goalie than Jonathan Quick so that could be a deciding factor as well. But the series starts in Los Angeles at the Staples Center, in front of fans that were excited their team just made the playoffs and at one point thought the Kings were out of it. That will be a big boost for the Kings, as it has throughout the post season.

For the Rangers, it will be important to take the fans out of Game One. If they don’t, the star power of the Kings lineup will rule the game and regardless if whether Quick plays his best game or not, the Kings will win it and most likely the series. If the Rangers can win Game One, it’s a good chance they can take this series away from the Kings.

If the series goes to seven games, the Kings will play four games on their home ice and that gives the edge to L.A.  It will be a great, bi-coastal Stanley Cup series for NHL fans everywhere. 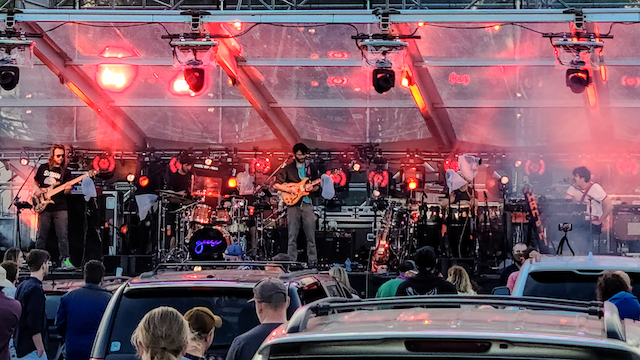 Goose ‘Tumbles’ through another sold-out run