The Baltimore Post-Examiner is proud to present an excerpt from Wendy Thomas Russell’s book, Relax, It’s Just God: How and Why to Talk to Kids About Religion When You’re Not Religious. In 2011 Russell launched Relax, It’s Just God, a blog for secular parents unsure about how to address the topic of religion with their children. The blog transformed into a humorous and thoughtful book. It is published by Brown Paper Press and can be purchased at Amazon.

Summary: A rapidly growing demographic cohort in America, non-religious parents are at the forefront of a major and unprecedented cultural shift. Unable to fall back on what they were taught as children, many of these parents are struggling — or simply failing — to address complicated religious questions and issues with their children in ways that promote curiosity, kindness, and independence. Russell sifts through hard data-including the results of her own survey of 1,000 nonreligious parents-and delivers gentle but straightforward advice to this often-overlooked segment of the American population. With a thoughtful voice infused with humor, Russell seamlessly merges scientific thought, scholarly research, and everyday experience with respect for a full range of ways to view the world. Relax, It’s Just God goes beyond the numbers to give nonreligious parents a toolkit to assist with their unique and complex issues and to usher in a more compassionate generation. Relax, It’s Just God aims to help nonreligious parents struggling to find the right time place, tone and language with which to talk about God. It encourages parents to promote religious curiosity, communication and diversity by lightening up and opening up about religion with their kids. By supporting  kids as they explore religion on their own, we ensure that they make up their own minds about what to believe, or not believe — and that they extend love and respect to those who may not agree with them.

“This well-written, thoroughly researched work that mixes advice humor and history . . . contains a wealth of information for secular or mixed-religious families preparing for the God talk with kids.” — Kirkus Reviews

“Wendy Thomas Russell never shies from the big questions. Her fresh, funny take on non-religious parenting is a much-needed addition to the secular landscape, and her book is an invaluable resource for parents who are raising kids without religion.” — Katherine Ozment, author, Losing Our Religion: The Quest for Grace Without God

RELAX, IT’S JUST GOD will be available, in both print and e-book formats at Amazon. 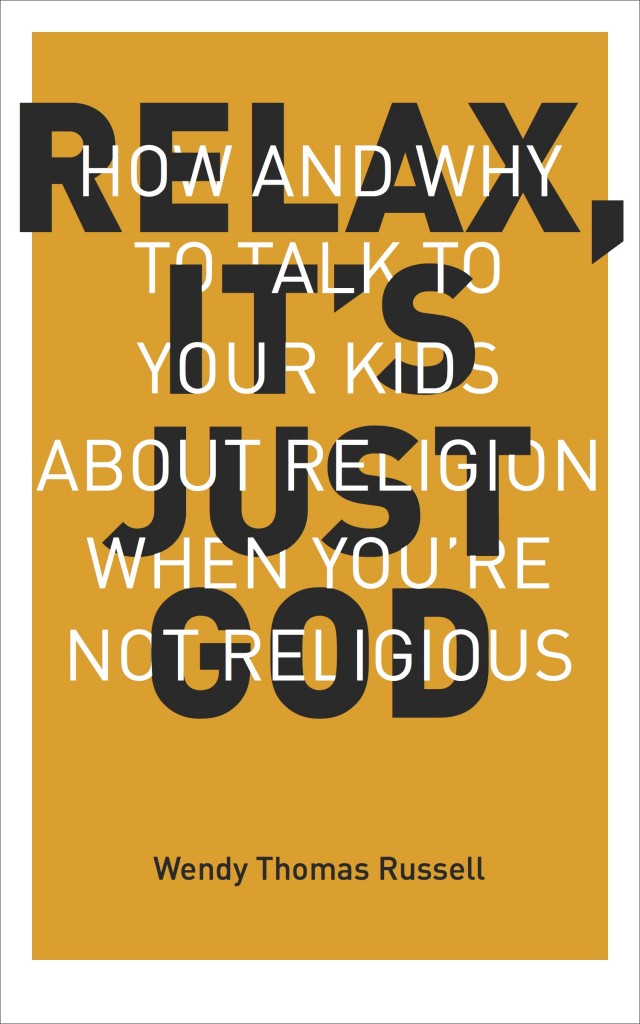 When raising children around devoutly religious relatives, you are almost certain to run across an awkward moment or two—or twelve. That being the case, it’s important that parents who want their children to build meaningful, lasting relationships with the faith-based factions of their families be willing to make an effort. Of course, the more rigidly religious the family members are, the more effort it will take. As always, there is a balance to be struck. And, as always, love and levity can go a long way.

Okay, so you’ve been disrespected, condescended to, verbally attacked, and even threatened with disownment and eternal damnation. That shit will get under anyone’s skin. But if religion is ever going to become an acceptable subject among you and your relatives, you’re going to have to stop taking an adversarial position. Often, we see religious exposure and treat it as religious indoctrination, or we hear words of faith and interpret them as acts of war. Shed your armor. Adopt a loving posture instead of a defensive one. Make jokes. Be self-effacing. And if all else fails, kindly change the subject to something you and your relative have in common.

Know what is and what is not acceptable to you, and why. Particularly in families where grandparents are likely to proselytize to their grand- children, boundaries need to be set. Do this in person if possible. Be nice. Make an effort to smile. Listen patiently, and try to reach an agreement with religious relatives. Let them know, gently, that you need to be able to trust that they’ll abide by your decision. It’s not unlike how you might already set boundaries around other issues, such as food or politics, with your extended family members. It’s one thing if your mother gives your child sugar once in a while; it’s another if that’s all she gives her.

People love to talk about themselves; it makes them feel good. And if your father’s interests center on his religion, allowing him to talk about his beliefs is a kind and open-minded thing. Think about how touched he would be if you invited him to tell your children about his faith. He’d no longer have to sneak around you (as much), or feel (as) resentful, or worry (as intensely) that you’re dragging your child to hell. When your child is old enough to separate fact from belief, let your dad know that, as long as he’s not saying anything harmful, hateful, or scary, he is welcome to expose your children to his beliefs. Then give your child a context in which to hear about Grandpa’s religion—or Cousin Suzie’s or Neighbor Bob’s. (An example: “Many people say that if you believe in Jesus, you will go to live with him in a place called heaven after you die. Grandpa believes that, which is part of the reason he wants you to believe what he does.”) Just be sure to encourage your child to share what he is learning with you; that way, you can keep track of what’s being said, correct misinformation, and balance things out as necessary.

If you have an especially vocal family, and find yourself getting stressed out easily, you may need to lower your expectations a bit. Try promising yourself you won’t get annoyed until you hear X number of religious remarks or stories. Then set the X number kind of high. I used to do this when I traveled long distances with my then-toddler. If I resolved not to get stressed until Maxine had, say, three meltdowns, then I didn’t exhaust myself trying to prevent just one. My relaxed attitude made all the difference, and the trips always exceeded my expectations.

Because most of religion is faith-based, arguing about religious belief is pointless. If you find it fun to discuss or debate religious beliefs and can do so politely, then have a go at it. But if you’re going to end up feeling frustrated or angry or thinking less of the person you’re debating—or, worse, if you’re going to hurt the other person — then leave it. Religious debate is one area where keeping your trap shut is a winning strategy.

Unfortunately, some relationships are just not strong enough to with-stand the divide caused by religious differences. Sometimes you have family members whose rhetoric is too thick to see through or whose religious beliefs have led them to zealotry. If you no longer feel you get anything positive from a relationship, then you are within your right to limit or stop visits altogether. Just be sure you think it through first, and that you’ve tried your best to make the relationship work. Giving family members a chance to right their wrongs and correct their offensive behavior is a must if you are to feel good about your decision down the road.

Wendy Thomas Russell is an award-winning journalist, author and editor. A native midwesterner, she spent the bulk of her career in Southern California, writing and editing for newspapers, magazines, and other online and print publications. For 10 years, she covered criminal justice and special projects for the Long Beach Press-Telegram — for which she won dozens of awards and honors, including being named Journalist of the Year by the Society for Professional Journalists’ Greater Los Angeles Chapter. Inspired by her own experience as a secular mother raising a young daughter, Russell in 2011 launched Relax, It’s Just God, a blog and book for secular parents unsure about how to address the topic of religion with their children. Her book, Relax, It’s Just God: How and Why to Talk to Kids About Religion When You’re Not Religious, can be purchased at Amazon. For more info, visit wendythomasrussell.com.

The Art of Becoming Un-Wired: A Novel and True Story

Where did Edgar Allan Poe have his last drink?