Puerto Rico’s Arecibo Observatory is looking to raise money and boost its international profile as the world’s largest single-dish radio telescope prepares to celebrate its 50th anniversary this October.

On Apr. 24, diplomats from Chile, El Salvador, Peru and Spain met in Washington D.C. with Carlos M. Padín Bibiloni, chancellor of Universidad Metropolitana (UMET), which operates the observatory along with SRI International — an independent nonprofit research institute headquartered in California’s Silicon Valley — and the Maryland-based University Space Research Association, under a cooperative agreement with the National Science Foundation (NSF).

Also at the meeting was José F. Méndez, president of the Ana G. Méndez University System, which runs UMET.

As the diplomats dined on traditional Spanish food at La Taberna del Alabardero restaurant — located one block from the World Bank in Washington D.C. — Padín outlined his vision for the Arecibo Observatory, which was inaugurated Nov. 1, 1963, at a cost of $9.7 million.

Since then, the remote facility tucked among the karst limestone mountains of north-central Puerto Rico has racked up a long list of milestones, including everything from measuring the rotation rate of Mercury in 1965 to generating the first radar maps of the surface of Venus in 1981.

In the early 1990s, the facility discovered the first planets outside our solar system, and last year joined with telescopes in Europe and with the Russian Radio Astron satellite to form the largest telescope ever.

“We want to share this facility we have in Puerto Rico with other countries. The idea is to promote international collaboration using the Arecibo Observatory to share knowledge and research,” Padín explained. “If Arecibo is pertinent for us, it should be pertinent for everybody.”

The observatory’s enormous “dish” measures 1,000 feet in diameter. It’s 167 feet deep and covers an area of about 20 acres. Its surface is made up of nearly 40,000 perforated aluminum panels, each measuring about three by six feet, supported by a network of steel cables strung across the underlying karst sinkhole.

Suspended 450 feet above the reflector is a 900-ton platform, which hangs in midair on 18 cables strung from three reinforced concrete towers.

The observatory operates on a continuous basis, 24-hours a day, 365 days a year, providing observing time, electronics, computer and logistic support to scientists all over the world. Every year, about 200 scientists visit the facilities to pursue their own research projects, and numerous students perform observations that lead to their master’s and doctoral dissertations.

In 1997, the observatory achieved pop-culture status popular with the movie “Contact,” in which actress Jodie Foster plays an astronomer working at the Arecibo Observatory’s SETI (Search for Extraterrestrial Intelligence) program.

Cornell University under the NSF’s supervision managed the observatory during its first 48 years of existence. But in late 2011, the NSF opened the management contract to competition, and the current partners won the competition.

“We were selected to manage Arecibo Observatory. NSF decided that our group was better prepared than Cornell,” he said. “We have the responsibility to be sure everybody is using this facility to stimulate careers in science.”

Padín said the observatory’s operating budget comes to $12 million a year. The bulk of its funds come from a five-year funding package from NSF ($40 million) and NASA ($10 million). The Ana G. Méndez University System has kicked in $1.25 million, with smaller amounts coming from the Puerto Rico Industrial Development Co. ($273,000) and the Puerto Rico Science Technology and Research Trust ($210,000).

“But these funds are not enough to run all our projects, so we are doing local fundraising efforts at the local and national level to improve the visitors’ center and increase the use of educational facilities at the observatory,” he said. “Our goal for the next five years is to raise another $50 million from different sources, and we already have $4 million of that from other non-government sources.”

Chile and Peru were invited to the Apr. 24 gathering because both countries have key astronomical observatories. In March, ALMA — the world’s largest ground-based observatory — was inaugurated on a plateau 5,000 meters above sea level in northern Chile’s Atacama Desert. Peru’s Jicamarca Radio Observatory, located just east of Lima, is run by the Instituto Geofisico del Peru with support from NSF.

Padín said he invited El Salvador to stimulate interest among the nations of Central America. Spain is involved because the Ana G. Méndez Foundation has a long-established relationship with leading institutions in Spain including the Universidad de Granada, which was founded in 1531 and today has more than 80,000 students and 3,700 professors. It also has strong links with the Spanish Research Council, which runs both the Andalusia Astrophysics Institute and the Sierra Nevada Observatory.

Padín said a similar meeting will be set up in September with the ambassadors of Argentina, Brazil, Colombia, Costa Rica and Panama, and that on Oct. 2, 2013, a major diplomatic event will be held in Washington marking the observatory’s 50th anniversary.

At the observatory itself, star-gazing evenings will be held every month. Until the end of May, the observatory’s Angel Ramos Foundation Visitors Center will exhibit the lunar rock found by astronaut Jack Schmitt of the Apollo 17 crew during its trip to the moon in 1972.

On May 22, a conference on the Arecibo Observatory will take place at the Spanish Research Council in Madrid, and in October, the facility will host a symposium with this rather unwieldy title: “The Arecibo Observatory at 50: Achievements, Rebirths and Leadership in Astronomy, Planetary Science and Space and Atmospheric Science.”

In addition to making the observatory more accessible to scientists and scholars, Padín wants to raise its profile among ordinary tourists as well.

The facility gets around 85,000 visitors a year, but UMET’s goal is to boost that to 100,000 visitors annually. Among other things, a new planetarium and hotel are on the drawing board.

“We want to improve the whole experience,” Padín said. “Most of our exhibits were made 15 years ago. We want touch screens. Students are learning in a different way these days, so we want to be up-to-date. We also plan to have traveling exhibits so we can bring Arecibo to the world.” 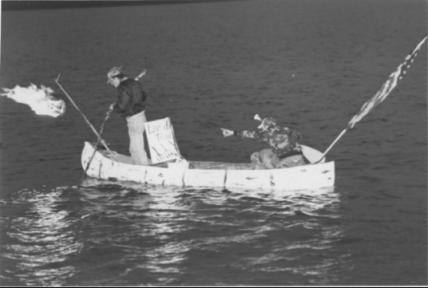 What’s so bad about spearfishing?