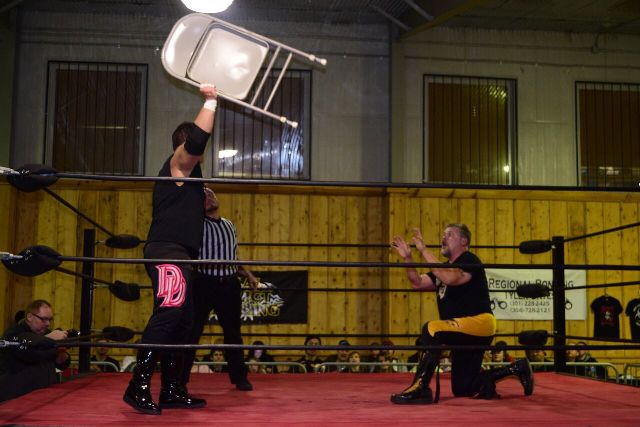 Prior to the opening bout, PCW payed tribute to Axl Rotten with a moment of silence, his absence marked by an empty chair in the ring. Rotten passed away two days prior in his hometown of Baltimore. Rotten’s career was highlighted by his stint in Extreme Championship Wrestling (ECW) from 1993 until 1999.

The somber crowd was soon elated by the first contest of the evening, pitting G-Fed, along with manager Ken Doll, against PCW newcomer Oakley Woods. During an argument between Doll and the referee, Woods took the opportunity to make use of Doll’s cane, striking G-Fed between the legs with a low blow, securing a successful debut victory.

PCW Tag Team Champions The Forgiven swept PCW’s 2015 Fan’s Choice Awards, earning Tag Team of the Year, Faction of the Year, and Match of the Year for their battle against members of New Japan Pro Wrestling’s Bullet Club, Doc Gallows and Tama Tonga. Additionally, manager Tyler Steel was awarded Manager of the Year.

The Forgiven’s award-winning moment did not go unnoticed by Punk Rock All-Stars, who were told to no-show Cold War on account of not winning an award. Angry and hungry for the tag team titles, Punk Rock All-Stars were placed in a match against Rob Locke and Joe Key, with the winners having the next opportunity to become PCW Tag Team Champions. Punk Rock All-Stars made quick work of the inexperienced Locke and Key, with Drake Carter pinning Key following a Powerbomb.

The brutal conflict between Fenix Fury and Gory spilled over into a third contest. Early in the match, Gory’s disrespect for Fury showed no signs of letting up as he raked Fury’s head across the barricade, mocking Fury’s enduring fans. However, Fenix did not let his adversary get the best of him, escaping a brutal submission hold from Gory and finishing the match with a DDT. According to PCW’s Facebook page, this was the final match in the series between Gory and Fenix Fury.

The trio of Logan Easton LaRoux, Alexander James, and J.P. Callahan have been a continual annoyance to the PCW roster. James’ opponent at Cold War, former WWE Superstar Kevin Thorn, came prepared to give the team a taste of their own medicine. Thorn began the match by viciously chucking James out of the ring. Thorn opportunistically stole James’ entrance gear from his corner, adorning himself in his opponents clothing. Thorn then mocked James’ effeminate, bleached blonde hair by calling him “Simba,” provoking the crowd to chant the lyrics to “Hakuna Matata.”

James quickly took control of the match following brief interference from LaRoux. LaRoux later interfered again, this time saving James from an Impaler, Thorn’s finishing move, with a low blow. Thorn was eventually able to regain his momentum, finishing James off with a successful Impaler.

In the next match, Doug Delicious was paired against former ECW World Heavyweight Champion “The Franchise” Shane Douglas. Douglas’ dirty tactics clearly hadn’t changed, as he hid behind the safety of the referee before the match went outside of the ring. Once the match returned to the ring, Delicious brought a chair into the mix, striking Douglas in the torso and the back. The veteran Douglas returned with a Drop Toe Hold, sending Delicious’ beautiful face into the solid steel chair. As the dirty fight persisted, Logan LaRoux and Alexander James made their presence known, as always, attacking a defenseless Doug Delicious. Kevin Thorn came back by surprise, saving the vulnerable Delicious by Chokeslamming LaRoux. The referee was forced to call for the bell, the match ending in a no contest. However, LaRoux’s continual trouble-making brought unwanted attention from PCW’s Board of Directors, who announced he would be facing another ECW mainstay, Stevie Richards, at PCW’s The Reckoning on April 16th.

An award-winning evening is not enough to get the night off in PCW. As such, The Forgiven was due to defend their PCW Tag Team Championships once again, this time against the team of Bobby Shields and Dirty Money. A duo of crowd favorites, Shields came close to dethroning the champions when he set Matt Conard up for an Impaler, but the quick-witted Jason Kincaid was there to kick Shields in the midsection, freeing his partner. Conard made good on Kincaid’s save, returning the favor with a big boot to the beautiful face of Booby Shields. A Spinebuster from Matt Conard was enough to secure the victory, continuing The Forgiven’s year-long reign.

Cold War was headlined by PCW Heavyweight Champion Drolix and Nui Tofiga. Tofiga brought his A game, proving he just might be the dominant athlete. Unfortunately, friends proved to be more valuable than skills, as interference compliments of Drolix’s Black Wallstreet cohorts Chuck Lennox and Solo allowed the champion to retain his title. The three celebrated the victory by laying waste to Tofiga, leaving him in shambles as Black Wallstreet left the ring in control of the PCW Heavyweight Championship.

Here are the complete results for PCW’s 2015 Fan’s Choice Awards.

Primal Conflict Wrestling’s The Reckoning is already the talk of the town in Harper’s Ferry. To see the continuing saga of awesome factions like The Forgiven and Black Wallstreet, be sure to mark your calendar for Saturday, April 16th. The Reckoning will be held at KOA Arena, 343 Campground Road, Harper’s Ferry, WV. Tickets are available at primalconflictwrestling.com. Card subject to change. To follow the pro wrestling adventures of photographer David “Ace” Livingston, visit him at facebook.com/wrestlinginmaryland 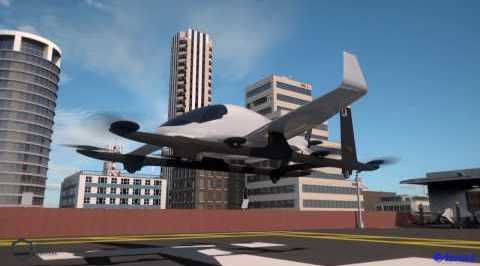