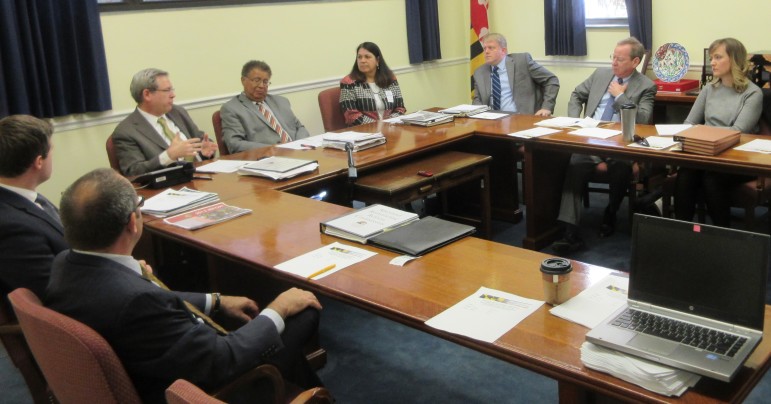 The governor’s Redistricting Reform Commission wrapped up its final report Tuesday calling for an independent, bipartisan commission of nine people to draw congressional and legislative district lines, with no politicians involved.

All but two Democratic legislators on the 11-member reform group voted for the final report setting up the kind of independent commission Gov. Larry Hogan had called for.

Good government groups in the Tame the Gerrymander coalition, including Common Cause and the League of Women Voters, applauded the outcome. The Maryland Democratic Party called the work “fundamentally flawed” and “predetermined by a small group of Republican insiders.”

“This is not a partisan issue at all,” Hogan said on WBAL radio’s C4 show Tuesday morning.

Maryland has some of the most gerrymandered districts in the country, and “an overwhelming number” of Maryland want it changed, Hogan said.

Hogan was referring to his potential reelection to a second term in 2018. Under current law, he would be in charge of redistricting following the 2020 Census.

The Redistricting Reform Commission’s quick approval of a plan hashed out in two previous work sessions was slowed down Tuesday morning by an unexpected objection.

Co-chair Alexander Williams, a retired federal judge, told the group that the head of Maryland’s judiciary, Mary Ellen Barbera, chief judge of the Court of Appeals had called him to object to the commission’s plan to use of Maryland judges to screen potential candidates for the new independent commission.

As originally proposed, two Circuit Court judges and a Special Appeals court judge would screen applications from the public for seats on the commission. They would create three pools — 10 Democrats, 10 Republicans and 10 independents.

Then three from each pool would be chosen at random to make up the nine-member panel.

Williams said Barbera wanted to keep the judiciary “truly independent” and out of the redistricting process, although the Court of Appeals ultimately gets to review any challenges to the plan.

The commission decided to propose “a panel of officials drawn from a branch of government service associated with neutrality, independence, and responsibility,” which might include retired state or federal judges.

Del. Alonzo Washington, D-Prince George’s, was the only member of the commission to vote against the official recommendations. Sen. Joan Carter Conway, D-Baltimore City, was not present at the meeting to vote.

Washington called the committee’s work a “good effort,” but said he is skeptical whether the recommendations could “actually get done” in Annapolis. Conway had already voiced her objections to the independent commission, saying it was unlikely to pass the legislature.

She favors a more modest proposal to establish the same standards for congressional lines as already exist for legislative districts. That is also part of the recommendations by the Redistricting Reform Commission.

The commission called on the panel to create “congruence,” “contiguity” and “compactness” in the new voting districts, along with upholding equal population and the federal Voting Rights Act.

Washington also said there was not enough time to fully flesh out other possible ideas. Echoing Washington in wishing for more time was Commission member Christopher Summers, founder and president of the Maryland Public Policy Institute,

This process was like “opening the fire hydrant and trying to take a drink from it,” Summers said. With the expanded time, Summers said, he would have liked to have outside experts come in from other states that have successfully redistricted, such as California and Iowa.

If the legislature adopted the commission’s recommendations, Summers said, it would still be a “monumental shift.”

In August, Hogan signed an executive order creating the commission to address gerrymandering in both legislative and congressional voting districts.

In Maryland, redistricting occurs every 10 years following the results of the U.S. census. In 2011, Gov. Martin O’Malley redrew the 6th congressional district, taking away conservative voters in order to oust a veteran Republican.

Seven of the state’s eight seats in the U.S. House of Representatives are now held by Democrats.

That process created some of the most contorted and non-compact congressional districts in the country, only matched by North Carolina which gerrymandered for Republican advantage.

“The public’s frustration has been palpable at every hearing on this issue,” said the Tame the Gerrymander Coalition in a statement. “We thank the Commission for taking advantage of this unique opportunity to fix our rigged system by thinking big and thinking bold, and getting the insider politics out of our redistricting process.”

“Larry Hogan’s hand-picked commissioners received their marching orders on the day they were appointed,” Murray said. “The outcome was predetermined by a small group of Republican insiders, the process lacked transparency, and the recommendations are fundamentally flawed.”

“Congressional districting is a national issue, and it deserves a national solution,” Murray went on, repeating the widely held view of Democratic elected officials. “Republicans drew the lines in six of the nation’s ten most gerrymandered states and eight of the nation’s ten most gerrymandered districts. If Larry Hogan is serious about reform, he should ask his allies in the GOP-controlled Congress to schedule hearings on legislation to provide a national solution.”

The Redistricting Reform Commission specifically rejected that approach. Its report said: “Responsibility for Congressional redistricting is entrusted to each state rather than to the federal government or the U.S. Congress, and that it would be inappropriate for the U.S. Congress to insert itself into the local process which establishes the constituencies from which its own members are elected. The commission believes Maryland should proceed with its own reforms.”

But the commission also suggested that Hogan, Miller and House Speaker Michael Busch write to the governors and legislative leaders of the other 49 states encouraging them to make reforms similar to those being recommended here.

About 10 states now have some form of independent commission.