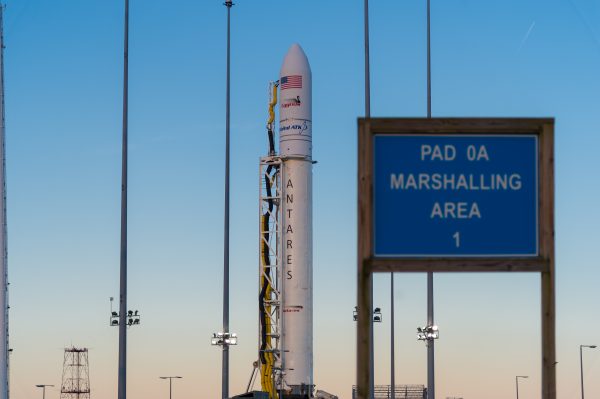 May 17, 2018, Wallops Island, VA – Despite rain over the region, the Antares Rocket with Cygnus Space Craft on-board rolled out to launch pad 0A at the Wallops Space Flight Facility on Thursday night in preparation for the OA-9 Mission.

The first launch attempt was scheduled for Sunday, May 20 at 5:04 a.m. EDT. However, officials have now moved that launch to Monday, May 21 at 4:39 a.m. EDT. Weather permitting, officials say the launch can be visible across the East coast of the United States including as far inland as Baltimore.

Mariners and Aviators (including drone operators) should be aware of notices from officials regarding restricted airspace and waterways surrounding Wallops Island, Va. Assateague Island National Seashore and Chincoteague National Wildlife Refuge in Virginia will be closed and will not be available for viewing the launch.

The visitor center at Wallops Space Flight Center will open to the public at 1 a.m. EDT.

Launch coverage on streaming online from NASA TV will begin at 4:30 a.m. EDT at http://www.nasa.gov/nasatv

UPDATE: Friday, May 18, 2018 – NASA has released a statement delaying the launch.

“Orbital ATK in conjunction with NASA, has moved the Antares and Cygnus launch to NET Monday, May 21st at 4:39 a.m. EDT to support further pre-launch inspections and more favorable weather conditions. Monday shows an 80% probability of acceptable weather for launch.”