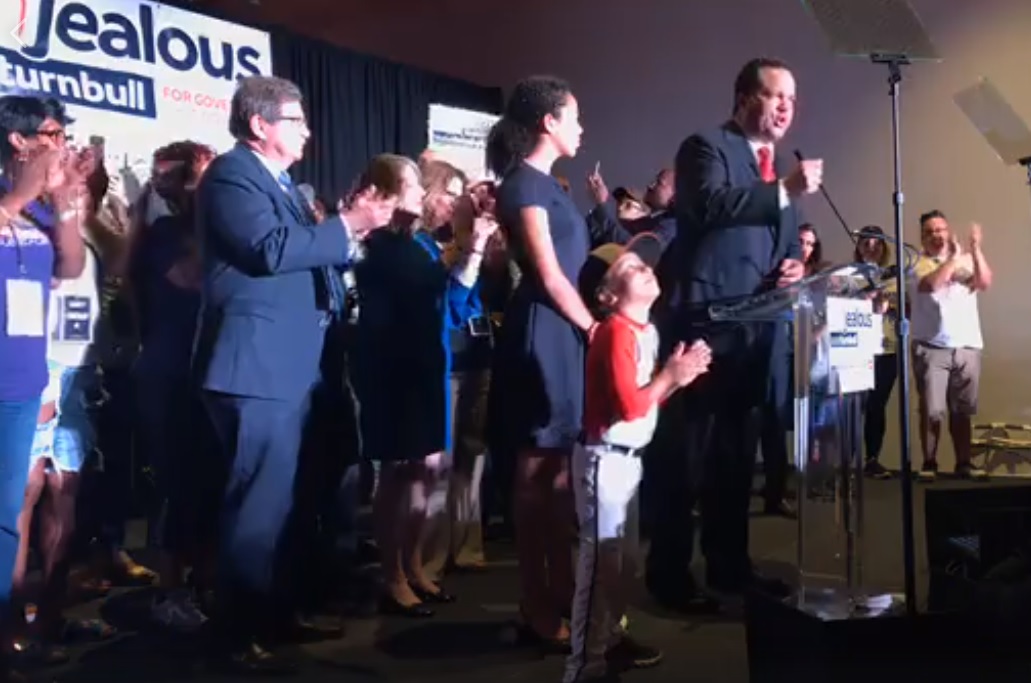 Democratic primary voters in Maryland moved their party to the left on Tuesday. Younger, more progressive candidates beat older establishment liberals in key races, led by the energetic performance of former NAACP president Ben Jealous, who will face Republican Gov. Larry Hogan as their nominee in the fall.

The strong showing by Jealous, carrying all but two counties against an underfunded Prince George’s County Executive Rushern Baker, may have been a key factor in progressive victories down the ballot, particularly in the Baltimore region. Jealous got almost 40% of the vote statewide against eight opponents.

He thumped the establishment-backed Baker in the Baltimore City and county, with the help of the teachers union, many labor groups, out-of-state progressives like Sen. Bernie Sanders, and money from California, where he was born and raised.

In a rousing victory speech, Jealous immediately began pounding Hogan as a creature of the past aiding and abetting President Trump. The new Democratic nominee for governor touted his signature themes of Medicare health insurance for all as a right, free college tuition and an end to mass incarceration.

His victory in Baltimore County, where he got 31% of the Democratic vote, may have helped push former Del. Johnny Olszewski Jr. (Ol-SHEV-ski) into a narrow lead in the race for county executive. Until Tuesday night, the Democratic primary had been considered a two-person race between four-term state Sen. Jim Brochin and County Councilwoman Vicki Almond.

With Johnny O ahead of Brochin by only 361 votes, that race may be determined by absentee and provisional ballots. They suddenly became a factor after the state Motor Vehicle Administration failed to forward address changes for almost 80,000 potential voters to the elections board due to a computer error.

On the Republican side for executive, with the help of Hogan, Insurance Commissioner Al Redmer beat Del. Patrick McDonough with 56%, ending the long political career of the flamboyant conservative populist sometimes called the Trump of Baltimore County.

Impact of the progressive wave

The impact of the progressive wave was felt particularly in legislative races. Losing their long-held seats were two veteran Senate committee chairs, Mac Middleton of Finance and Joan Carter Conway of Education, Health and Environment, and the longest-serving House of Delegates committee chair, Joe Vallario of Judiciary, as did Senate President Pro-Tem Nathaniel McFadden and Sen. Barbara Robinson, both of Baltimore.

First-term Del. Jimmy Tarlau, a former union organizer about as progressive as they come, lost his seat to Julian Ivey, son of Jolene and Glenn Ivey, she a former delegate and he a former state’s attorney, by just 386 votes.

Not every Democratic race went to the younger candidate on the left. In Prince George’s County’s District 25, former Del. Melony Griffith handily beat Del. Angela Angel with 55% of the ballots to claim the seat held by retiring Ulysses Curry.

And Sen. Jill Carter, the former maverick delegate, handily beat back a challenge by J.D. Merrill, 27, the son-in-law of former Gov. Martin O’Malley O’Malley, 2,700 (55%). Former Sen. Nathaniel Oaks, about to go to prison next month, was still on the ballot and got 1,100 votes.

Like many legislators in all-Democrat jurisdictions of Prince George’s and Baltimore, Washington, McCray, Hayes, Griffith, and Carter face no Republican opponent in November.

Their victories present Senate President Mike Miller, 75, 32 years in that job and easily winning his primary for a 12th four-year term, with the task of maintaining his power over a Senate that is growing younger and more progressive as he loses key allies, and must replace three out of four standing-committee chairs.

Not to make too much of the shift to the left, scores of incumbent legislators of both parties won their primaries handily, as they always do. One exception was Republican Sen. Steve Waugh of St. Mary’s County, where Gov. Hogan took the unusual step of endorsing his opponent, Jack Bailey, who got 55% of the vote.

With fewer seats up for grabs, Republican lawmakers held off challengers. District 9 Sen. Gail Bates of Howard County got 54% of the vote against novice candidate Reid Novotny, and faces Democrat Katie Fry Hester in what has been a reliably Republican district.

John Leopold, the convicted and disgraced former Anne Arundel County executive, failed miserably in an attempt to regain a House of Delegates seat in District 31B represented by House Minority Leader Nic Kipke. Brian Chisholm will run for the district’s second seat, beating Leopold by 3,000 votes.

In one of the most publicized Republican delegate races, Kipke — with the help of funding from Republican Anne Arundel County Executive Steve Schuh — pummeled County Council member Jerry Walker with a torrent of negative mailers, keeping him from defeating one of the three Republican incumbents in District 33.

Unsurprisingly, all seven incumbent members of the U.S. House of Representatives easily won their primaries, and face underfunded and little-known opponents in the fall.

In the 6th Congressional District that stretches from Montgomery County to the mountains, with eight Democrats running, the big money of businessman David Trone beat the younger and more progressive Del. Aruna Miller, giving him 40% of the vote as she got 30%. Sen. Roger Manno of Montgomery County ran a poor fourth with 10%.

In November, Trone will face Republican business consultant Amie Hoeber, who got 68% of the vote in her primary.

If you were wondering why so little was heard of U.S. Sen. Ben Cardin’s reelection campaign, you need just look at the results. Spending little of his $2.8 million war chest on advertising, Cardin got 81% of the vote against seven Democratic opponents.

Chelsea Manning, the transgender leaker of intelligence secrets, did little to campaign but came in second with 5.5% of the vote. University of Maryland policy analyst Jerry Segal spent more than $1.4 million of his own money on newspaper advertorials, TV, radio and social media, — almost $75 per vote — to come in a very distant fourth, with 3.3% of the vote.

For voting results in all races, both state and local, see the State Board of Election website.

29,000 people of both parties voted for Pipkin, but just 32 Republicans get to choose replacement; Wargotz applying