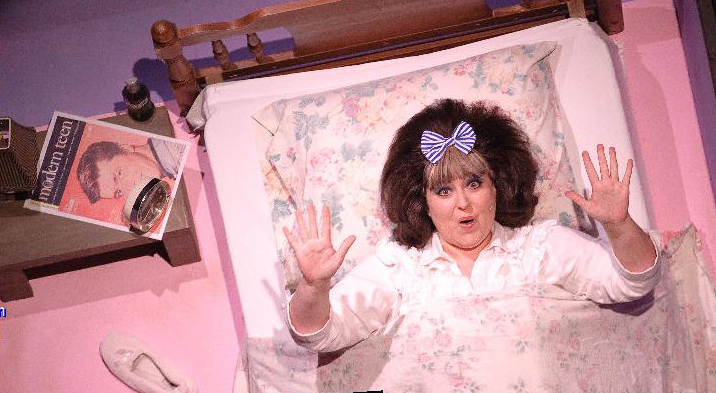 Back in the early 80s, I was penning a political column for Baltimore’s weekly City Paper. Its office was then located in a three-story brownstone on North Charles Street, near 28th Street. I recall going to an office party there early one evening. It was packed with people and sadly, also (gasp) cigarette smoke.

Who do you think showed-up as a guest of honor? Why the man with the pencil-thin mustache–that filmmaking icon–and then a chain-smoker of Kool cigarettes–John Waters, that’s who.

As the fates would have it, I didn’t get a chance that evening to touch base with Waters. He was literally mobbed by the festive partygoers.

I’ve continued to be amazed at just how many people in Baltimore and environs have connections to Waters. His name came up in a conversation recently at Minas Gallery. A young gal chirped in that she had just watched him do a hilarious stand-up comedy routine on a cable network. And, another person, an older fellow, said he has his book of comic/still photographs, “Director’s Cut,” and remembered working as an extra on one of his films back in Waters’ guerrilla days.

Enter Robert Maier and his unauthorized, insightful, entertaining, sometimes biting and often funny book, “Low Budget Hell: Making Underground Movies with John Waters.” Maier was in “Showbiz” for over three decades in a wide variety of films, industrials and TV commercial jobs as a writer and soundman, location and unit manager, along with line producer and production manager. He literally has done it all and he has the engaging stories to prove it.

Maier was raised in Towson, in Baltimore County, Maryland. In fact, his home was only minutes away from Waters’ homestead in Lutherville, although the two didn’t meet professionally until 1973. Maier was then working at University of Maryland Baltimore County (UMBC), in the Arts & Humanities Division, while Waters was looking to use some of its high-tech video and audio equipment to film “Female Trouble.” He also wanted to find people on campus to help him do the movie. Most readers of the book will find it highly amusing how Waters pulled off this particular stunt.

It’s fair to say that Maier’s relationship with the reputed “Prince of Puke” clicked almost at once. This began for him a “hair-raising eighteen year ride” through the world of low-budget underground filmmaking, most of them with Waters.

During parts of the 70s and into the late 80s, starting with “Female Trouble,” Maier was a member of Waters’ production team in a wide variety of positions. Flicks like: “Desperate Living” and “Polyester” followed quickly on his slate board. The latter starred Divine and Tab Hunter. Then, Maier moved on, with Waters, to his more upscale [read respectable] flicks, such as: “Hairspray” and “Cry-Baby.”

Hairspray and Cry-Baby were different in some very important ways. Not only were they union-sanctioned gigs, but they had fat-cat backers, too. They also featured top Hollywood actors, like John Travolta and Johnny Depp. So, they truly didn’t fit into the genre of underground movies.

Maier’s memoir is full of engrossing anecdotes about the Walters’ “Dreamlanders.” This was the original team of actors and support crew that were the engine/soul of his halcyon days as an underground moviemaker. Think legendary names from that bygone era, such as: Divine, David Lochary, Edith Massey, Van Smith, Vince Peranio, George Figgs, Sue Lowe, Charles Roggero, Mary Vivian Pearce, Pat Moran, Chuck Yeaton and Mink Stole.

Maier’s description of the talented Waters’ alter-ego, Pat Moran, rings with the truth: “She never learned to drive a car, but was a fearless and daring entrepreneur with flaming red hair and a hair trigger Irish temper.” Today, Moran is an award-winning casting director, with a list of credits, including all of Waters’ flicks, second to none in her field.

In the early 70s, Fell’s Point’s “Bertha’s” was the main watering hole for the Dreamlanders. Maier soon became one of its “insiders” during their ritual-like Friday night conclaves. In fact, he got to know Edith Massey so well, (she had a thrift store a couple of doors up from Bertha’s), that he later did a documentary on her life, via a 15 minute VHS video (30 minutes on the DVD). It became a cult favorite. It’s called: “Love Letter to Edie.” Waters did the introduction to it by “praising Edie as a great American character.”

Maier recounts how for the supposedly “trashy” movie, “Polyester,” the incomparable Divine, the Drag Queen Par Excellence, who had the lead, “failed his physical for being morbidly obese!” This created a serious problem for the cast insurance policy needed by the movie’s Hollywood-based producers. Buy more expensive insurance or dump Divine? Read the book to get the answer to that one.

During “Female Trouble,” a key crewmember was found in a bathroom “shooting [himself] up” with drugs! He was immediately removed from the premises, Maier tells us, and booted from the production for violating Rule 1. That commandment read: “No drinking and no drugs on the set!”

Maier relates how, on another occasion, a motel that he was forced to rent for a shoot for “Polyester,” located in Millersville, Anne Arundel County, was beyond “sleazy.” It was described bluntly as, “disgusting, dirty and dank!” Oh, only in a John Waters’ underground film, Hon!

There is so much more to this book, than the absorbing incidents relating to Maier’s evolving relationship with Waters. Maier’s multi-faceted career had, on its own, taken many twists and turns, mostly for the better. At one time, he even produced a film later featured at the B&O Railroad Museum, at Baltimore’s fabled Mount Clare Station.

Over the years, Maier and Waters were so close that the latter served as the “best man” at his wedding. Alas, as the results of a few hard bumps in the road on film-related issues, Maier and Waters ended up going their separate ways. Meanwhile, two of Waters’ films, “Hairspray” and “Cry-Baby,” were transformed into enormous successes as musicals on Broadway.

By way of full disclosure, this reviewer had cameo roles in Waters’ films “Pecker” and “A Dirty Shame,” and non-speaking parts in the movies “Serial Mom” and “Cry-Baby.” I also reviewed Waters’ latest book, “Role Models.” And, finally, this one will surprise even the author Maier: I appeared in his 20 minute dramatic film, produced for the CSX Corporation, on the Founding Fathers of the B&O R/R.

I leave the final thoughts on this behind-the-scenes’ tome to Maier himself: “Sometime things do actually turn out well. John and the other characters in the book help tell the story. I thank them for being there and for being who they were, and for making it such an amazing journey.”