On Thursday the Las Vegas Metropolitan Police Department issued a press release stating that they don’t expect any further major releases of either video or documents related to October 1.

The LVMPD said they are now doing due diligence to ensure that all documents have been released.

If documents are identified that have not been previously released, they will be made available, and at this time there are no more scheduled weekly releases, the LVMPD said in the press release.

They asked if you dropped off a flash drive or hard drive for a release, that they are available for pickup at LVMPD headquarters.

By several accounts, there are still hundreds of hours of police body-worn camera footage and 911 Communication Center telephone calls as well as written witness statements/officer reports that still have not been released to date, as well as hundreds of hours of hotel surveillance video footage of Paddock that the LVMPD reviewed.

The Federal Bureau of Investigation still has not released the results of their investigation into the Las Vegas Massacre, contrary to statements made last year by Special Agent in charge of the FBI Las Vegas Division, Aaron Rouse, that the FBI reports would be released before the end of 2018.

When the LVMPD released its final criminal investigative report on the Massacre in August, the police made reference numerous times that some of the information in their final report came from the FBI reports.

So why hasn’t the FBI released their reports?

California attorney Catherine Lombardo (no relation to Sheriff Joe Lombardo) one of several attorneys representing victims of the Massacre told the Baltimore Post-Examiner on Friday: “We believe that there is still significant video footage that the LVMPD has in their possession. We look forward to receiving it so that the victims can continue to receive answers.”

After Lombardo was sworn in, he told a local reporter that he was proud of the way LVMPD officers responded on the night of October 1, 2017.

What the reporter should have asked him, was if he was proud of LVMPD Field Training Officer Cordell Hendrex, who along with LVMPD Officer Eliff Varsin and three armed Mandalay Bay Hotel security supervisors, retreated on the 31st floor as Route 91 Music festival attendees were being slaughtered and failed to take any action to confront gunman Stephen Paddock.

We still have heard nothing from Lombardo on why it took the LVMPD over one hour to breach Paddock’s room and why the LVMPD full SWAT Team wasn’t there to make entry.

The Baltimore Post-Examiner will continue throughout 2019 to report on stories that the Las Vegas media appear reluctant to cover. 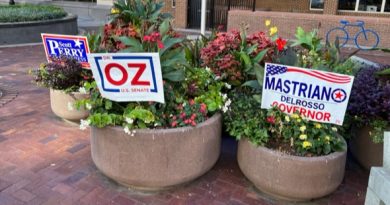 So goes Pennsylvania goes the Nation?