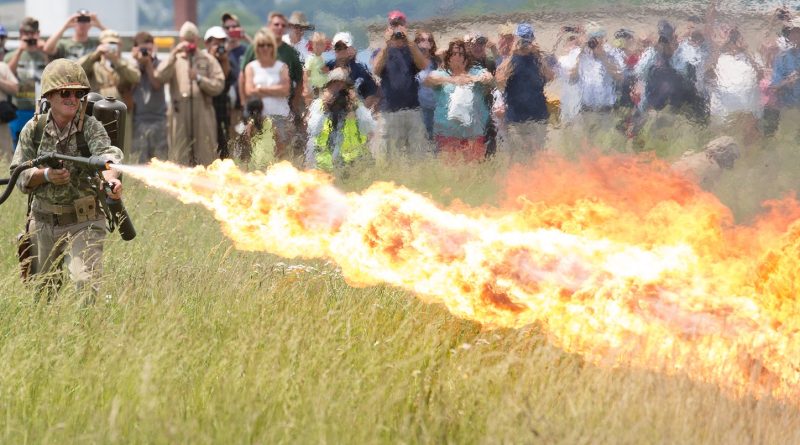 PARRIS ISLAND, SC – Perhaps no single image from World War II epitomized the resolve of the U. S. Marines as did the photograph of the flag-raising on Mt. Suribachi. The iconic image – which was snapped during the Battle of Iwo Jima by Joe Rosenthal of the Associated Press – would eventually serve, not only as a moral booster for the folks back home, but as the post-war template for the U.S. Marine Corps War Memorial at Arlington. So moving is the image that, even today, a generation with fading ties to the costly Pacific Campaign, recognizes the significance of that singular moment in history.

Keeping U. S. Marine Corps history – and much more – alive is part of the ongoing mission of the award-winning Living History Detachment of the Parris Island Historical and Museum Society.

The Living History Detachment – which regularly represents the Marine Corps in re-enactment events (such as the upcoming Mid-Atlantic Air Museum WWII Weekend) – is under the Parris Island Heritage Foundation. The foundation is a nonprofit organization that supports the Parris Island Museum.

This year’s presentation at the WWII Weekend marks the group’s 16th consecutive appearance at the Reading, Pennsylvania airshow.

Stephen Price is one of the detachment members who regularly makes the 700-mile trek to Reading from Parris Island.

“We started this organization back in September 2004 with a group of historical-minded individuals who wanted to present Marine Corps history to the new recruits on Parris Island. But we also reach out and promote this history to various civilian organizations and events, like the Reading World War II Weekend. That way we can showcase Marine involvement in World War II and teach the general public about our history from that conflict.”

Price was quick to note that the unit also represents other eras of Marine history.

“We do a World War I event every November around Armistice Day at the Pall Mall, Tennessee hometown of Sgt. Alvin C. York. The WWI event is not really a reenactment, but a commemorative living history camp set up to help recreate life from that time period. And we do Korea and Vietnam-era events as well,” said Price.

What kind of reaction does the detachment get from attendees at events such as the Reading airshow?

“Oh, we get a great reaction from the crowd, and also from the other living history participants. They like what we do. We ‘Remember, Honor and Serve’ our veterans and community through this show.

“We set up a whole camp scenario with several tents from the era. Cots – anything that was used during that time period. We also bring all the uniforms, weapons and equipment – everything that a basic Marine rifleman used in World War II.

“And we bring the flamethrowers along.

“In our presentation at Reading, we do a fire maneuver demonstration. This happens just prior to doing the Iwo Jima flag raising recreation.

“But the fire maneuver is not really a reenactment.

“Basically, what we’re doing is, we’re showing the crowd how the Marines would work what they called a ‘corkscrew and blowtorch’ method for taking out Japanese bunkers. This is where they would employ the bazooka round-sabot charge, along with small arms fire. Then the last thing would be moving in the flamethrower operators to hit the bunker with their weapons and remove any remaining threat.

“That tends to be pretty exciting for the crowd.”

Handling a flamethrower under any condition would certainly rate as a specialized skill. We wondered if the Corps assigns active duty Marines to assist in these demonstrations?

“We have several active-duty Marines in our detachment that are volunteers, but as volunteers they can’t be assigned to certain tasks. This year – if my head count is correct – we’re going to have four active-duty Marines with us. Three of them from Parris Island, and then another gentleman is coming from either Quantico or from Camp Legeune. So no one is assigned a particular role, however, active Marines can join our organization.”

Is having a Marine Corps background a stipulation for joining the detachment?

“We don’t care if you served in the Marine Corps or not. As long as you represent the Marine Corps properly when you’re in uniform and we’re doing an event. Do it right, then you can be part of our organization. If anyone would like to join the organization, or just get to know more about us, I’d say come talk to us at Reading.”

Has traveling with the detachment given Price the opportunity to personally meet some of the veterans from WWII?

“Oh, yeah, definitely. I’ve met veterans from the war just by working in the museum itself. But we have met many veterans of World War II that have come to the camp just to see us. It’s always great to talk to them and listen to their stories, and motivate them as they motivate and inspire us.”

We asked Price if any of the vets war-time stories stand out in his mind?

“For many years, I knew a Sergeant Major who was on Iwo Jima named Mike Mervosh. He was actually on Roi-Namur, Saipan, Tinian, and Iwo Jima, with the 4th Marine Division. Or more specifically – he was with ‘Charlie’ Company, 1st Battalion, 24th Marine Regiment, 4th Marine Division.

“He told me one time, ‘You know, Marines are a brotherhood, and they always have been, and always will be.’

“So, with that being said, he related the story to me that his company landed on Iwo Jima with about 250 men.

“After a couple of weeks being there, they had to get replacements. These were new guys – they had never met before. And so one evening, he didn’t remember the exact date, he got a bunch of new guys.

“Mervosh was a platoon sergeant, and the next morning they were going into an attack.

“As they go into the attack, Mervosh started around a corner of a trench line, and did not see a Japanese soldier that was coming at him with a samurai sword. A new kid in the platoon turned around, fired, eliminated the threat of the Japanese soldier and saved Mervosh’s life.

“Ten minutes later, the kid was killed by enemy fire. And Mervosh never knew his name.

“I heard him tell that story many different times. And there’s a reason he told that story.

“To inspire the younger Marines, and to let people know that that’s what Marines of today still do. That’s why the Marine Corps is big on its history. That’s why we teach it in recruit training, and we emphasize it throughout anybody’s time in the Marine Corps.

“It’s just one of those things.

“As a side note, I have literally seen a WWII-era Marine sitting at a table in a restaurant with his family – got a World War II Marines ball cap on – and a brand new Marine – just graduated boot camp – is by his side. And they’re sitting next to each other and they’re talking like old friends.

“Because they’re Marines first and foremost.”

The Mid-Atlantic Air Museum WWII Weekend runs from June 3-5. More information about the popular “Gathering of Warbirds” may be found at the event site.

For more information about the Living History Detachment of the Parris Island Historical and Museum Society, check out their website, or better – drop by to see them when you’re at the Reading airshow!