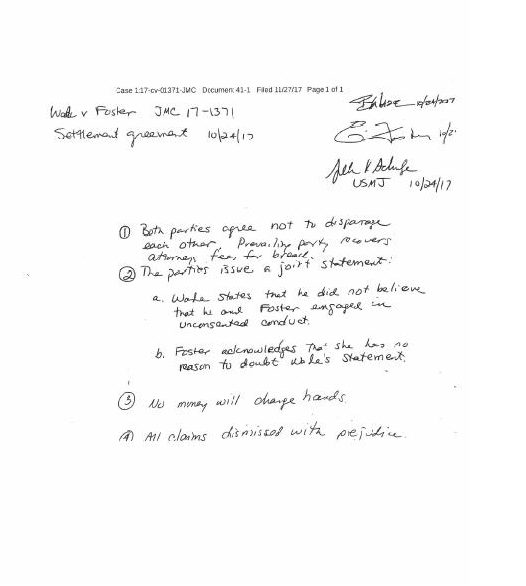 A settlement that was originally signed in October has finally been affirmed in the defamation case between Baltimore “kink” rope master Bret Wade and burlesque star Sophia Sunday.

At issue were objections by Sunday to language in the typed draft settlement, which her council maintained added stipulations not found on the hand-written agreement. These objections led attorneys for Wade to request the case be reopened in November and the October agreement be “denied.”

The Baltimore Post-Examiner first reported on this unusual case last June, when Wade – claiming defamation of character – sued Sunday (Erin Chaney Foster of Albuquerque, New Mexico) for $1.5 million. A second story detailed Sunday’s countersuit, which alleged that Wade had committed a “consent violation” and sexually violated Sunday while she was tied up and intoxicated.

Sunday never filed a report with Baltimore City Police, but rather leveled her accusations against Wade on social media.

In a 12-page complaint, obtained by the Post-Examiner, Wade vehemently maintained the alleged consent violation against Sunday never took place. Wade laid out a nearly year-long timeline, in which he says a “deep relationship” with Sunday developed. This deep relationship, he maintained, included “sexual activities other than intercourse.”

Wade stated in the complaint that he believed the story Sunday told of the alleged consent violation was wholly contrived by Sunday to cover an embarrassing marital infidelity.

The October settlement order (along with other documents obtained by the Post-Examiner) states:

This Court has been advised by the parties that the above action has been settled, including all counterclaims, cross-claims and third-party claims, if any. Accordingly, pursuant to Local Rule 111 it is ORDERED that:

This action is hereby dismissed and each party is to bear its own costs unless otherwise agreed, in which event the costs shall be adjusted between the parties in accordance with their agreement. The entry of this order is without prejudice to the right of the party to move for good cause within 30 days to reopen this action if settlement is not consummated. If no party moves to reopen, the dismissal shall be with prejudice.

The settlement hit a snag when council for Wade presented Foster/Sunday with a typed draft agreement which appears to have expanded on the hand-written agreement.

Wade was represented by Marc A. Ominsky and Brandy Ann Peeples. Council for Foster/Sunday was Matthew B. Kaplan.

1) Both parties agree not to disparage each other. Prevailing party recovers attorney fees for breach.

2) The parties issue a joint statement:

a. Wade states that he did not believe that he and Foster engaged in unconsented conduct.

b. Foster acknowledges that she has no reason to doubt Plaintiff Wade’s statement.

3) No money will change hands.

4) All claims dismissed with prejudice.

Subsequent to the signing of the above 58-word agreement, council for Wade submitted a “reduced” document of nearly eight-hundred words titled Settlement Agreement and Mutual Release. That document contained a somewhat expanded version of the hand-written settlement agreement, but went on to include language, which appeared to make Sunday responsible for removing social media posts which her attorney maintains were out of her control.

The typed document further stipulated that it superseded the hand-written agreement. Sunday’s attorney believed Wade’s document might open her to further litigation on the case somewhere down the road.

Sunday, on the advice of her council, refused to sign this second document.

Since Judge Coulson’s Oct. 24 order allowed either party to move for good cause within 30 days to reopen the action if settlement was not consummated, Wade moved to reopen the case on Nov. 22, 2017.

“The Parties written settlement agreement is labeled ‘Settlement Agreement,’ requires that all claims be ‘dismissed with prejudice,’ and contains a non-disparagement clause. It makes no reference to any intent to negotiate additional or supplemental terms.”

Sunday’s council, Matthew B. Kaplan, also argued in rebuttal that the case had already cost his client, “tens of thousands of dollars in legal fees” and that she, “has contemplated filing for personal bankruptcy.”

According to Kaplan, sometime in December, Wade’s counsil withdrew the motion to reopen the case.  Court documents do not mention the motion withdrawal.

An attempt to reach Wade or his attorneys for comment has not been successful. Foster/Sunday would only comment through Kaplan, who said that she is “glad this is finally over.”

For his part, Kaplan – who was reached by phone – declined to answer specific questions about the case, referring us instead to a blog post on his law office website. Kaplan also demurred when asked why Sunday never filed formal charges with the police, or if a second woman he had deposed – who also alleges a consent violation by Wade – might be planning on suing Wade.

It is unclear if Wade has returned to his role as a rope master in the Baltimore kink scene or if the case has affected his earning potential.

Sunday blogged on her website that she has appeared in numerous shows during the course of the litigation.

According to a 2004 survey by the Department of Justice, 97% of civil lawsuits never go to trial.  Lawyers work hard to hammer out settlements knowing that, regardless of the strength of their case, anything can happen before a judge and a jury.  But even in cases where no blame is affixed, and parties leave the settlement table on amicable terms, litigants are often inexorably affected as they have been tried and convicted in the court of public opinion.

No money changed hands in the settlement between Bret Wade and Sophia Sunday.

In our one interview with Wade’s attorney, Marc Ominsky, about this case, he asked, “How do you price a reputation?”   Now that the case is settled, the vexing question that seems to remain is, “How do you get a reputation back?”

The following images represent some of the documents related to the Wade/Foster case.  These include the Oct. 24, 2017 settlement agreement; the undated Settlement Agreement and Mutual Release drawn up by Wade’s attorneys; and Wade’s Nov. 22, 2017 Motion to Reopen the Case 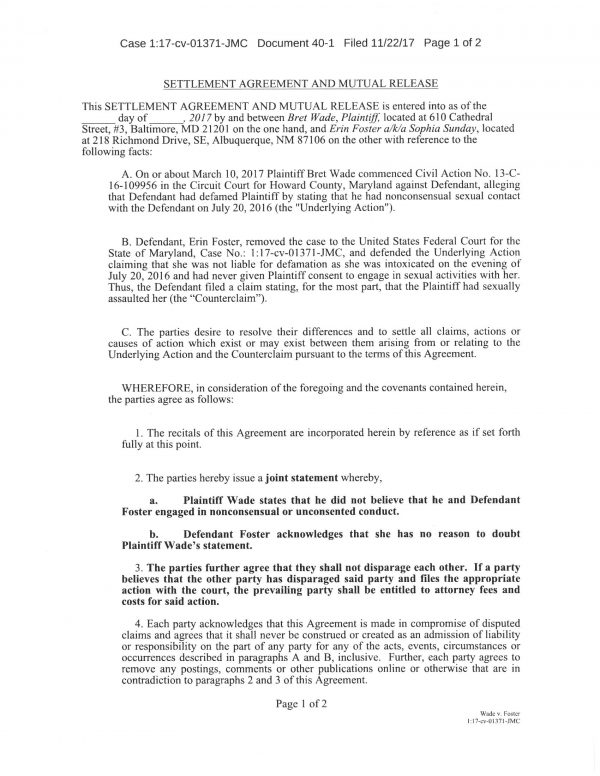 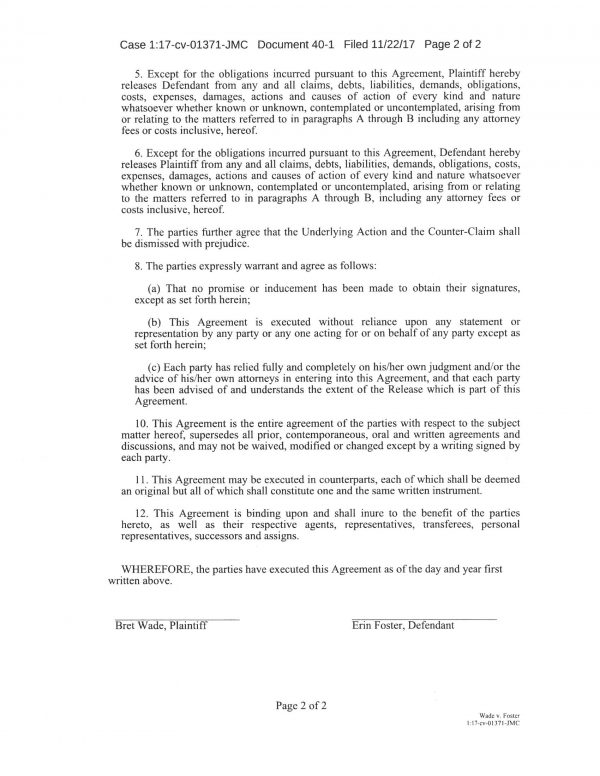 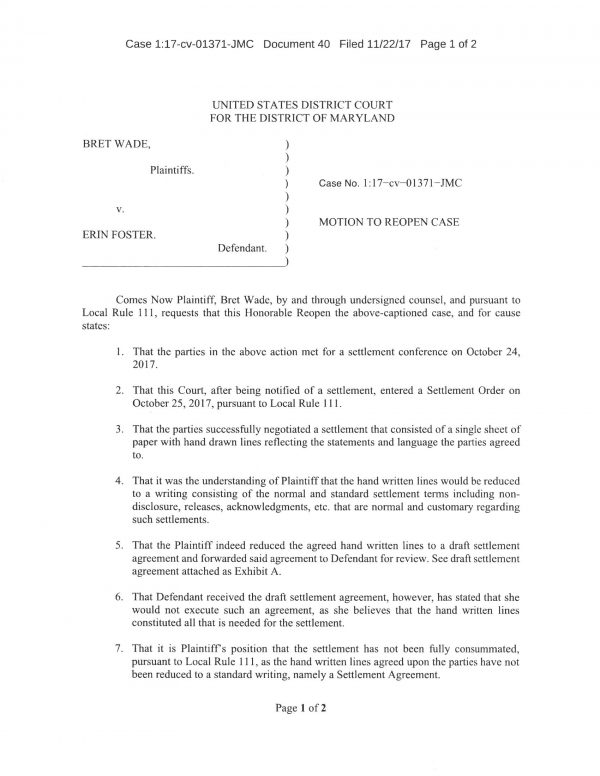 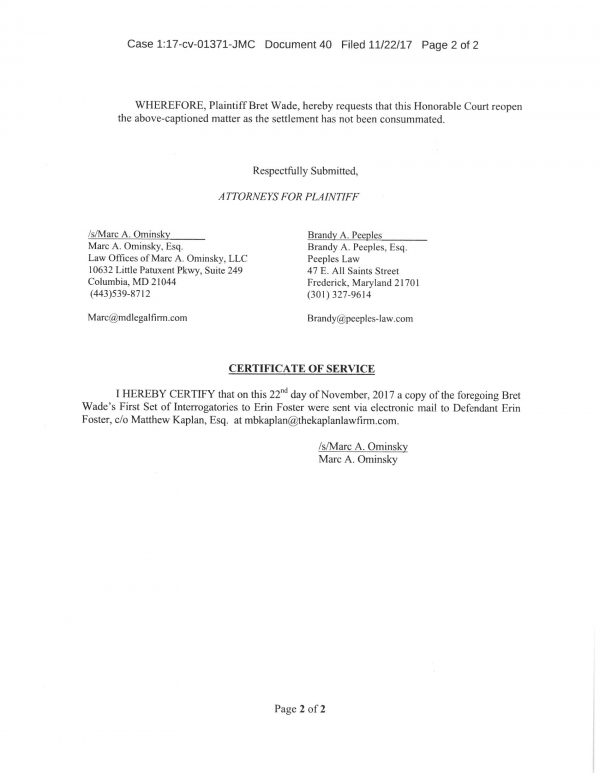 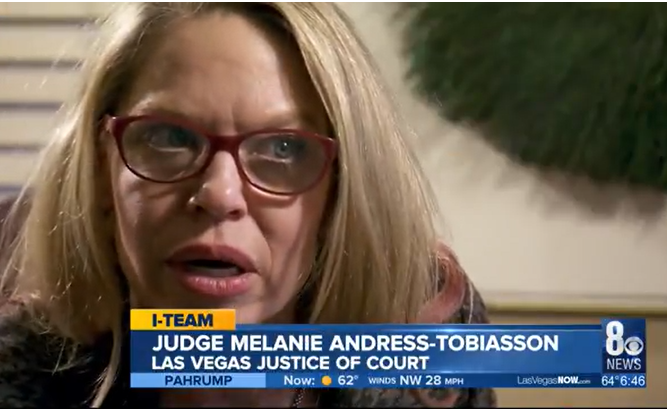