In less than two weeks, the nation will pause to remember the 50th anniversary of the death of President John Fitzgerald Kennedy.

No one who was alive on November 22, 1963 will ever forget what they were doing when they heard the news that the president had been assassinated. Life stood still as all eyes turned toward Dallas, Texas and places most people had never heard of: Dealey Plaza, the Texas School Book Depository and Parkland Hospital.

Robert Groden remembers that day very well. It was his 18th birthday.

Now almost 68, Groden has spent most of his life reliving that tragic day. As the foremost authority on the photographic evidence of the Kennedy assassination, Groden has shared his thoughts on the crime in five best-selling books, in lectures across North America and interviews heard around the world, and as the chief consultant to director Oliver Stone on the film JFK. More importantly, Groden’s criticism of the Warren Commission Report (he was the first person to show the stunning Zapruder film on national TV) factored heavily into forcing Congress to reopen the investigation of the assassination.

In Washington, Groden served for three years as staff photographic consultant for the House Select Committee on Assassinations. That investigation concluded that the slaying of the president most likely included more than one gunman. Groden was also senior program consultant to the riveting nine-part British documentary series, The Men Who Killed Kennedy. It is an understatement to say that he is an expert on the case.

Robert Groden was in Severn, Maryland on Friday November 1st to present a pictorial lecture on the assassination and to discuss what he sees as some of the more troubling aspects of the case. This free event (which drew a crowd of about 300 people) was presented at the Severn Christian Church by the Institute on the Constitution. Those who could not attend in person were able to watch the presentation as it happened via a live feed on the IOTC website.

Like many others, Groden said he was stunned by the crushing news that weekend in 1963. The grainy images in black and white of the smiling Kennedys waving to the cheering throngs will forever be juxtaposed against the Kodachrome film of the horrific murder scene as it played out in the motorcade.

There is no doubt that the president was felled by a grievous gunshot wound to the head. But beyond that indisputable fact, many questions still remain.

Groden opened his presentation by saying, “Thank you for coming here tonight. And thank you for caring about the death of our president.” He then wondered why the government has been so secretive about the case.

“The records have been sealed until at least 2037; maybe longer, if the last Kennedy child (Caroline) survives. If Oswald was indeed the lone shooter, why seal the records of the investigation? The Warren report was released in 1964. What are they hiding?”

Groden told the audience he firmly believes there was more than one shooter involved. He bases this conclusion on the film he has extensively studied and on the testimony of more than 40 eyewitnesses he has interviewed; all who maintain that Kennedy was shot from the right front side of the motorcade. (Oswald would have been shooting from above and to the rear.)

Conspiracy theories about the assassination have abounded for decades. However, Groden said, “I don’t deal in areas of theory and speculation. They tend to confuse the public about what really happened.” Groden then proceeded to show a compilation of film footage which took the viewer along the route from Love Air Field (where the president’s plane had landed that morning) to the frantic trip to Parkland Hospital.

Some of the more startling pictures presented included:

1)Two still shots of Donald Lawton – the Secret Service agent charged with personally covering President Kennedy – appearing confounded that he is being ordered away from the president’s car as the motorcade leaves Love Air Field for Dallas.

2) The picture of Congressman Albert Thomas – winking at a quickly-smiling Lyndon Johnson – taken immediately after a sober looking LBJ was sworn in as President on Air Force One. (This picture plays into the theory that LBJ was somehow in on the conspiracy.)

3) A series of images showing almost 400 people running through Dealey Plaza toward the Grassy Knoll, while just one police officer ran towards the School Book Depository Building.

And then there are the pictures of the actual assassination.

Seeing these images in slow motion sequence, it is hard to believe that a single (or magic bullet as it has so often been called) could have inflicted a total of seven different wounds to Kennedy and Governor John Connally. It does not help the government report that four hours after the pristine “magic bullet” was found and in transit to Washington, a different bullet remained lodged in the leg of John Connally.

Groden believes there were anywhere from 5-7 shots fired that day, and he showed seldom seen pictures of anomalies, such as a bullet hole in the windshield of the presidential limousine; a dent in the chrome frame around the windshield; an obvious gash in the concrete sidewalk along Elm Street in front of the infamous Grassy Knoll; and a chipped section of curb just before the railroad bridge at the end of Elm. Though the official count is three shots fired, the most the government can ever admit to is six shots. This is because six rounds is all the alleged murder weapon (an Italian made 6.5mm Carcano model 91/38 rifle) could hold. A seventh bullet would prove once and for all that a conspiracy had indeed taken place.

Mindful of the horrific nature of the brutal autopsy photographs, Groden paused briefly and warned the audience before showing a series of pictures of the dead president; comparing actual images and mock-ups based on the testimony of eyewitnesses, against the official images released by the government.

Contrary to the government images, which show an entry hole in the back of the president’s head, 88 witnesses, including attending physicians Dr. Robert McClelland and Dr. Charles Crenshaw, all confirm that the exit wound was in the back of Kennedy’s head. Both Crenshaw and McClelland stood mere inches away from John Kennedy’s head that day in Parkland Hospital and assisted while the sadly futile lifesaving efforts were made.

“His head was macerated. One fragment of the president’s skull was found some fifty-four feet behind the point of impact,” said Groden.

Groden also showed close-ups of the familiar pictures of Lee Harvey Oswald (holding a Carcano rifle) which clearly reveal that the pictures are fakes.

The author concluded that pictures, such as the altered Oswald shot, demonstrate the, “use of a controlled press to push a big lie.”

In the question and answer session following Groden’s video presentation, the author tackled a few of the nagging conspiracy questions.

Groden sought to debunk one conspiracy theory dealing with the switch of the casket that carried Kennedy back to Washington on Air Force One. Groden said the ornate bronze casket Kennedy was in when he left Parkland Hospital in Dallas was too large to fit through the door of Air Force One without inverting it on its side or removing the handles, so the body was placed into a standard military shipping casket (complete with a prescribed body bag) for the flight back to Washington. That is the simple casket that some eight witnesses described seeing, when the body arrived at the Bethesda Naval Hospital morgue.

Another disturbing aspect of the case and the investigation that followed, is the cast of characters who, though relatively obscure in 1963, would one day become household names. Groden mentioned Gerald Ford, who was then a congressman, and future senator Arlen Specter; both played an integral part on the Warren Commission. Groden also mentioned a picture which shows a man in Dealy Plaza who looks just like George H.W. Bush, though Bush has always denied that he was in Dallas that day.

One person asked if Jack Ruby (the man who killed Oswald) was operating independently?

“Not a chance,” replied Groden.

It is a well established fact that the Chicago-born Ruby had ties to the Mafia. Groden mentioned the book, Blood, Money and Power and pointed out that, “U.S. intelligence agencies worked with the mob going all the way back to WWII. Apparently, that relationship never stopped.” (This relationship would be crucial if there was a CIA/Mafia connection to the assassination.)

As for Oswald and the possibility that there may have been two or more men using that name in the 1960’s, Groden said, “I cannot trace (Oswald’s) military career, because he often seems to be in more than one place at the same time.”

One of the final questions of the evening dealt with the accuracy of the Oliver Stone film – JFK. Groden said the movie is really a blend of three different accounts, and that it probably should have been called the Jim Garrison Story, since Garrison (as portrayed by Kevin Costner) was the central figure in the film. But on the whole, Groden believes it to be an accurate rendering of what really transpired in the killing of President Kennedy.

Will we ever know the truth about the assassination? Was it a coup d’état? Groden is not so sure. The author appeared circumspect as the evening came to a close, reflecting on what he has learned from his lifetime of work.

“What really happened that day in Dallas? We don’t know it all, but we know more than they ever wanted us to know. Maybe someday, we will know it all.”

Guest Commentary: Del. Neil Parrott on the consequences of Obamacare 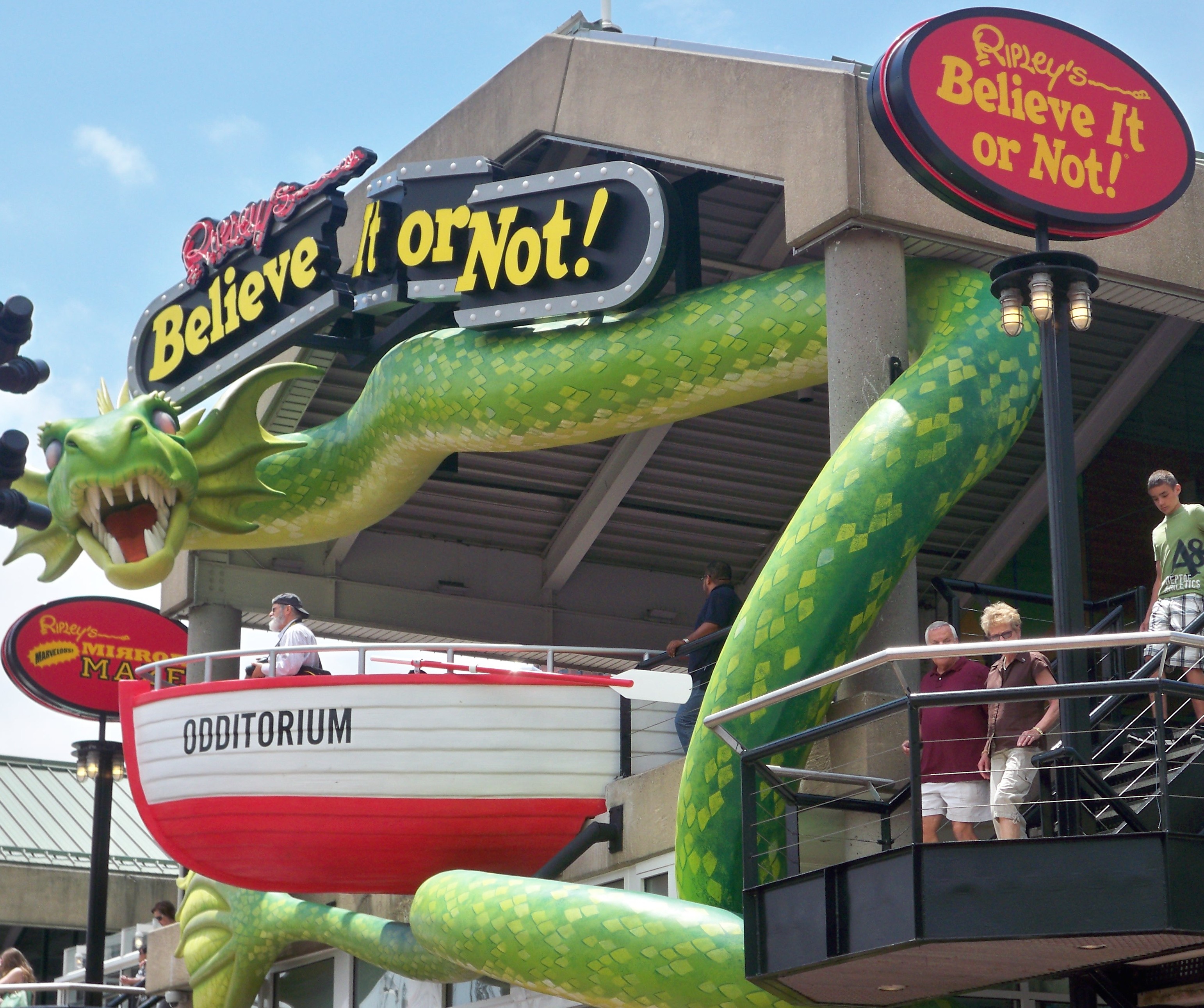 Believe it! Ripley’s is unbelievable!