If Truckee didn’t have a corrupt Greyhound agent, I would have missed the next day’s ride over the Sierras. I had suffered a full day of defeat watching freights roll by at 40 mph – Truckee does not have crew changes – and being pelted by a thunderstorm.

But the Greyhound agent bizarrely took only cash and quoted me two different fares for the same trip to Oakland. Damned if I was going to contribute to her illicit personal profits! I headed back to the local yard to sleep in a heated, idling locomotive. There was one BNSF train on a siding; however, its wheels had begun to rust and the newspaper in the engineer’s cab was three days old: “McGWIRE HITS NO. 57.” My slender hopes were pinned on this train.

At 4 a.m. I morosely eyed the BNSF lead unit; if it was still dead, I intended to go home by Amtrak bus and train. To my amazement, a crew was sitting in the relit cab. I stalked shivering through the dark to a grain car and waited. Two hours later, the helper units hitched onto the consist. Since five engines were hauling fewer than 30 cars, we practically raced up the Hill.

The Hill. That’s what Jack London, A-No. 1, and several generations of other tramps called the Sierra; John Muir termed it the Range of Light. I had shown up in Truckee, north of Lake Tahoe, intending to score a ride to Oakland over Donner Pass. The line crests at 7,017 feet before dropping to sea level. Seven years ago, I had seen it from Amtrak’s California Zephyr after a fondly remembered freight excursion through the Feather River Canyon and the uninhabited, federally owned Black Rock Desert. Now I wanted the open-air views.

The line has a rich history. It was the western half of the first transcontinental railroad, extending from California to Promontory, Utah. Built by four very greedy visionaries and their Chinese laborers in the 1860s, it had a corrupt beginning: one of those Big Four, Charles Crocker, conned the federal government into designating the flatlands east of Sacramento as the western end of the Sierras. The robber barons pocketed the triple subsidy for mountain construction; the people of California, knowing an outrageous scam when they saw one, began calling the flatlands “Crocker’s mountains.”

Feeling dismal and sleep-deprived, I did my best to enjoy the chilly dawn ascent. The cars were still streaked by yesterday’s rain; I did not want to risk climbing atop my grainer. Low-hanging clouds drifted over the valleys and around the track. Whenever the train barreled into them, I imagined we were entering a very cold version of heaven.

We soared along the ridgeline, ever upward into the towering granite heights of the Sierra. As morning progressed, it grew warmer and sunnier. Below me, car slaves drove along I-80 and Donner Lake glittered in its sapphire brilliance. Above me, cracked walls of rock extended into stands of scrubby trees.

Manmade history appeared atop this remote route. We rumbled through the famous perforated snowsheds, which were erected long ago to ward off the more prodigious snowfalls. Two thousand feet below, the Yuba River coursed through its canyon, but on this day the mists concealed it. I gazed across the abyss at a distant row of forested peaks, which stood separated by equally unbridgeable chasms that looked deeper than time.

Soon began the gentle westward descent, much more gradual than the uphill charge from Truckee. We headed down into the golden, sweltering reaches of the Sacramento Valley. Near Alta, deciduous trees started to appear beside the track; I noticed with some sorrow that their leaves were turning and that soon autumn would steal another year.

It was now extremely hot, hot enough to go shirtless, and I pondered the physiological effects of a single-day 60 degree variation in temperature. Down here, instead of granite walls and pine forests, the train ran past fiery rhyolite embankments and sun-blasted, blond grasslands. Rolling grassy hills and bleak subdivisions characterize greater Sacramento.

So, increasingly, do Union Pacific bulls in this brave new era of “zero tolerance.” I was still musing about Auburn’s immense statue of a coolie when I spotted UP bulls in blue, capped pickups at two consecutive crossings. They were about four miles out of Roseville Yard, so their range is growing. They will still have to do better than that to see Abdul Rahim!

The train approached Roseville, then stood stock-still for better than an hour, so that another train could depart. Losing patience, I bailed out. I had to wade out through an entanglement of thorny, knee-high weeds. Naturally, the train took off within ten minutes of my debarkation.

Hunger and dehydration were devouring my strength. I was still 18 miles short of Sacramento, maybe six miles from its bus system. Suddenly, an epiphany struck: “Who needs transit? The freights are my transit.” It took a draining, mile-plus trudge to the yard’s westbound end – and a draining dash across its easily monitored, trackless center – but I nailed a long mixed westbound. Shirtless and panting, I thought of drinking a barrel or two of iced tea.

It was a local. My cut of cars was set off in Sacramento. Wearily, I jumped the remaining string of cars west, but the engineer dumped me again in Davis. This time, “breaking air” and all, I didn’t realize it.

What a humiliating mistake for an experienced rider! Having usually ridden single-destination hotshots or the rear half of mixed freights, I’d never had to be so observant of the engineer’s doings. I was marooned in Davis, three hours and 31 miles out of Roseville.

Of all the places to be stranded, next to a train station is the most benign. If I had been dumped in the Mojave on a summer afternoon, or atop the Cascades at nightfall, using my final bullet would have been in order. Instead, within a half hour, I was heading home aboard an air-conditioned Capitol at 80 mph. After a day of freezing in Truckee and frying in Roseville, it felt like unspeakable luxury.

Whenever I read stories of train-hopping, the exuberance and adventure of it can beam from the page. Sometimes, I wonder if the flip side is unduly omitted. Could it be that most of us suffer from some private, unacknowledged pain and seek release, escape, in a journey by freight? Certainly the permanent hoboes are haunted men. Not that we, or they, can readily admit it: there is no unlocking the mysteries of the human heart. Recently, my thoughts have turned to an earlier time when I would engage the world instead of running from it.

I’m not the man I used to be. Maybe I never was.

These Days: A Tale of Nostalgia on Baltimore’s ‘Block’ 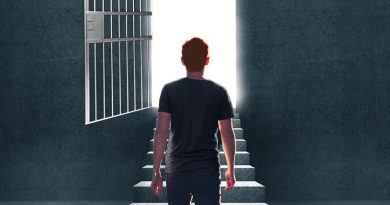 633 Days Inside: Lessons on Life and Leadership