The bill to expand casino gambling in Maryland that came out of the Senate Friday evening on an express train has slowed to freight-train speed in the House.

The House Ways & Means Committee held a five-hour hearing Friday as the Senate was wrapping up work on the bill, but a meeting of the House gambling subcommittee Saturday afternoon wound up being only an extended briefing with no action attempted on the bill. Delegates are expected to offer many amendments to the legislation later today, and on the floor Tuesday.

The final witness at the House Ways & Means hearing Friday provided some cautionary advice to the legislators. Unlike dozens of other witnesses representing the governor, competing counties, casinos and contractors, Ted Neuman of Lothian had nothing to gain or lose from the legislation.

Neuman, president of Tymatt, a stormwater contractor, was a Democratic member of the Montana House and Senate for eight years in the 1980s when that legislature  approved slot machines.

“Everything we heard today we heard when I was in the legislature,” Neuman told the committee. “We were told that we would have huge influx in the general fund,” but it never materialized.

The Montana lawmakers approved “machines everywhere,” Neuman said, and each gambling parlor was accompanied by pawn shops and payday loan stores. “They’ve displaced a lot of other businesses.”

“What it did was took money from the people who weren’t making a lot of money and put it in the pocket of the gaming industry and caused a lot of local industries to be hurt because there was no disposable income,” Neuman said. “You saw a huge increase in embezzlements” directly related to gambling.

“The people who could least afford it were putting the money in the machines.”

“I know you’ve heard it all before,” Neuman said. “You’re kind of accelerating your trip down that road.”
“What you really need is some hard data,” he said. “Give it a couple of years and see what it looks like.”

Neuman’s arguments are familiar ones brought up by opponents of more gambling, but at the moment they have not stopped the slow moving freight train bringing table games and a sixth casino to Maryland.

Dallas Buyers Club: aka The Revenge of McConaughey 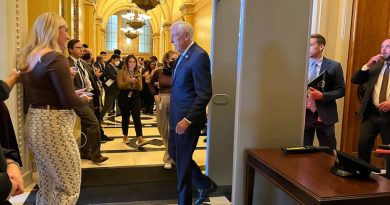 Maryland’s Hoyer adjusts to new role out of leadership