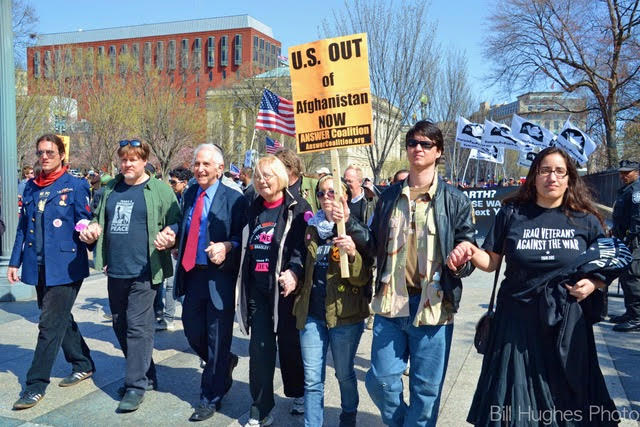 Listen to this article
(At a demonstration for peace in front of the White House on March 18, 2011, activist Daniel Ellsberg is third from the left.)
“I, Tonya” was one of the newly-released movies that I really enjoyed over the holidays. It dealt with the controversial U.S. figure skater, Tonya Harding. You might recall how, in 1994, she was allegedly involved in the vicious assault on her main competition, Nancy Kerrigan, a fellow Olympian. She later pleaded guilty to “hindering the investigation.”

Well, the flick painted Harding, born in Portland, OR, and played by Margo Robbie, as more a victim of her scheming ex-husband and one of his dim-witted cronies. She also had a Mother from Hell, marvelously portrayed by Allison Janney. Mommy dearest came off on the screen as the epitome of white trash, if there is such a thing. Her mother’s response to the film: “Tonya is a liar.”

Watching the flick, I was hoping Tonya would hit her mother over the head with a frying pan and rip that mustache off her ex-hubby’s face. No such luck.

I couldn’t help but think after viewing this movie: Hey, maybe Tonya was given a bad deal in the first place by the Media. Wrong!

Enter feisty pundit Maureen Callahan of the “New York Post” – one of my fave tabloids (01.12.18). She insisted that the movie, in a scathing rebuttal, retells the scandal – “untruthfully.” Callahan pointed to solid police and FBI evidence that showed that Tonya was definitely in on the plot. Callahan is convinced dear little, supposedly naive Tonya, deserved the jibe  – “pariah!”

Next up is “All the Money in the World,” another well-done movie. It also created some post-production fireworks of its own. You might remember how parts of this Ridley Scott movie had to be reshot after the lead actor, Kevin Spacey, suddenly, had to be replaced by Christopher Plummer. Spacey, also a fixture in Netflix’s “House of Cards’ program,” had badly slid off the runway in sexual harassment scandals from his past.

Plummer, 88, took over the lead in the film, playing the emotionally-stunted zillionaire, Jean Paul Getty. It turned out that Mark Wahlberg, who had a featured supporting part in the flick, refused to go along with the reshoot unless the producers “ paid up.” His agent, and rightly so, insisted on a payday of $1.5 million for the ten-day shoot, according to the Dailymail.com, 01.12.18) And, guess what? Wahlberg got what he demanded! 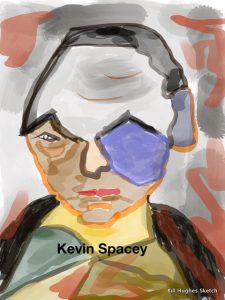 Meanwhile, Michelle Williams, a co-star on the production, received only $80-a-day for the reshoot even though she had more screen time than Wahlberg! So, her payday amounted to only $800, if these reports are true. How Ridley Scott and his boy-ohs got away with this one warrants some explaining. I have never heard of a SAG-featured performer getting only $80 a day for a shoot. This is what they pay extras for a film!

Bottom line: Wahlberg deserves credit for being savvy enough to demand more money for the reshoot. Reportedly, he had a clause in his contract protecting his interest in this kind of unusual situation. Unfortunately, Ms. Williams didn’t. If you want to be paid what you’re worth in a sexist Hollywood, you need to cover your bases. I’m sure Ms. Williams, and her fellow actresses, have learned a valuable lesson from this Made-in-Hollywood experience.

Finally, the political movie, “The Post,” which concerned the release of the controversial “Pentagon Papers,” in 1971, needs to be addressed. The film focused on how the “Washington Post” newspaper published the “secret documents” after a federal court injunction had stopped the “New York Times” from doing so.

Writer Norman Solomon believed that the above was “the high point of the Washington Post’s record in relation to the Vietnam War. The newspaper strongly supported the war for many years.” (“The Real Story Behind Katherine Graham and ‘The Post,’” Counterpunch.org, 12.27.17)

Katherine Graham, the “Post’s” publisher, played capably by Meryl Streep in the film, had a “cozy relationship” over the years with senior national security figures, such as the shadowy Henry Kissinger and slippery Robert McNamara, Solomon reported. You have to wonder has anything really changed with that paper since the death of Mrs. Graham?  Graham, Solomon added, also had a vindictive streak as far as respecting the rights of union workers.

U.S. involvement in Vietnam lasted from around the early 60s to 1975. Our country sacrificed 58,200 of its finest sons and daughters in that bloodbath. The “Post” did little or nothing to stop the conflict and/or to bring to justice those who had deceived the people, a la the “Gulf of Tonkin Resolution,” into getting us into the war in the first place.

Daniel Ellsberg is the real hero of “The Post” movie, but he is hardly mentioned in the film. He risked serious jail time for his daring conduct. The actor Matthew Rhys portrayed him in the movie.  See, http://www.history.com/topics/vietnam-war/pentagon-papers

Now, eighty-six years old, Ellsberg has continued to be a strong anti-war activist, speaking out at pro-peace rallies across the country, no matter who is sitting in the White House.

It’s true “The Post” is an entertaining movie. Tom Hanks as Ben Bradlee does a credible job as the editor of the paper.

But, the flick doesn’t deserve all the applause it is receiving. Keep in mind that, “The Post,” is only a Hollywood version of what really happened with respect to the Pentagon Papers, the Vietnam War, the Washington Post and the late Katherine Graham.

Learn about Effective Ways of Reducing the Risk of Genital Herpes

Anxiety has a remedy