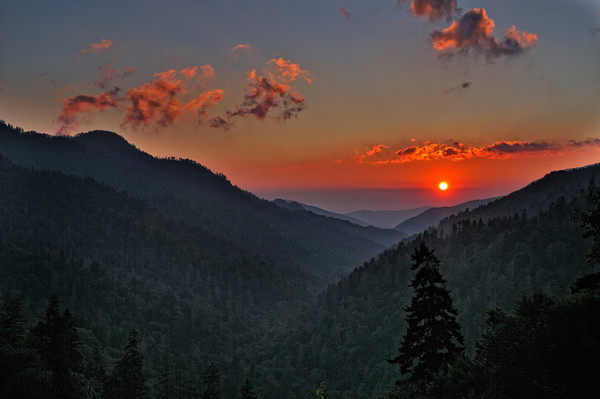 Charlie May just wouldn’t shut up. From the moment we’d left Philadelphia, en route to our meeting in New Orleans, Charlie offered his views on everything — from the turn in the war against the Japs to his take on the Burma Shave signs. No change of subject could side-track the man.  He was like an over cranked Walter Winchell, with absolutely none of the charm.

May was the legal-eagle who handled our contract with the Navy. I was a marine engineer, assigned to the Higgins boat project. This trip would allow me to witness the tests on an improved bow-ramp design. My guess was that Charlie would simply slap a few backs before bounding down to Bourbon Street.

We were just breezing into the Blue Ridge mountains when the sun finally faded in the west. It was still early evening and with Bristol maybe three hours ahead, I decided to press on. The sooner I got to Lake Ponchatran, the sooner I’d ditch Charlie May. I flipped on the lights, cracked the window a bit and dropped the old Nash into low, all the while hoping the transmission grind would somehow drown out the prattle of my talkative tormentor.

Somewhere south of Blacksburg, the radio faded to static. I hoped the quiet would settle him down, but Charlie May didn’t miss a beat. It was then that I realized there are really two kinds of bores.

The first kind you can sniff out immediately. They’re the tiresome wags who could put a cup of coffee to sleep.

The second are the sort whose canards may initially spark some hazy interest, but then they knit tale after tale together to form a relentless dissertation; one which makes you just want to go and hang yourself.

Nine hours with the man.

If I heard one more story about his father, the small town Georgia judge, who loved to drawl “Y’all Guilty!” I was sure I would reach for the rope.

We were high in the mountains by this time – too high to be driving at night on a switchback road. I needed every ounce of concentration just to keep my war-time rubber glued to the graying macadam. You’d think the damned fool on the seat next to me might sense the weight of our situation. But no, Charlie just droned on, and with every syllable, I felt my hands squeeze the steering wheel tighter; as if my grasp wasn’t on the brown Bakelite but rather around his cackling throat.

I’m not proud of what happened. It was on a hard left turn just before the peak. Nine hours from Philly with Charlie May. Nine hours of that bastard’s incessant bleating. It was on that bend that I lost my decency; that I truly lost my mind.

My last nerve frayed, I faced to the varlet and yelled, “GOD DAMN US BOTH TO HELL MAN, DON’T YOU EVER SHUT UP?”

I felt my face flush ruby-red, as if Satan himself had seized my soul. And for the first time on this tortuous ride, Charlie May was finally speechless. Two bulging eyes and a gaping mouth replaced his litigious, cocksure grin. The silence of that moment was truly golden, though almost as eerie as the expression on Charlie’s face. I found myself transfixed on the man as his look of stupefaction suddenly morphed into one of a kind of dumb, impending doom. My outburst had hushed Charlie May alright, but the silence no more slowed down the Nash than his look of horror could spin the steering wheel, or somehow apply the brakes. I turned in time to see the edge of the road at that last hairpin curve give way to the darkness of a drop into the abyss.

The Nash flew straight at first, slicing through the dull brown brush at the top of the mountain. And though the slide was steady, to me it seemed like a harrowing slow-motion dream. We only flipped twice; lucky, I suppose, given the severe degree of the drop. But twice was enough. The second flip slung me out the door; Charlie went through the so-called safety glass. The car, still descending, at last came to a stop – wedged into a clef near the base of the mountain. And Charlie fell too, his twisted body thrown violently against the now burning wreckage.

I was surprised to see that his face remained frozen with that same grotesque gasp and those bulging, blood-soaked eyes staring lifelessly back at me. I had a clear view of this scene as I was impaled on a tree 50 feet above.

In time, the birds and the elements freed me from the grasp of that ungiving pine. I fell to the ground, rolling across the slick, dried needle floor and finally settled beside Charlie; my ear (or the place it once hung) mere inches away from his still gaping skull.

They never did find us; who knows how hard they looked? After all, there was a war going on. Some years later, the state put a scenic pull-off at the spot where we’d left the road. From dawn til dusk, people stop and admire the beauty of the view. Toddlers squeal and little girls scream, while boys press the guardrail and shout, “HELLOOO” – waiting for the sure, soothing report from the steep rock walls of Echo Canyon. And they laugh and then leave, never knowing that the only echo I hear every time someone stops and yells Hello, is: