The last few weeks have been quite a roller coaster for me. A lot of really good things have been happening, and unfortunately a good number of bad things have happened too. But I like to think of myself as a positive person so let’s focus on the good things.

This is the first in what I hope to be a long series of Day Trips. This one is great for summer since it can be a day trip from the mainland here in Baltimore, or it can be a good day trip from much of Maryland’s summer home, Ocean City.

Maryland’s Eastern Shore has been spawning new breweries quite a bit lately. And while I love new brewers, I know it takes them a little while to find their groove if you will. In this trip I visited, a few of my favorite Maryland brewers, Evolution Craft Brewing Co. in Salisbury, MD and Burley Oak Brewing Co. in Berlin, MD.

My first trip was Evolution. Funny thing about Evolution is how they have in fact evolved. A few years ago, I would visit Evolution at their old (read small – really small) brewery in Delmar, Delaware. If there were 25 people in that place it was packed. Fast forward to today’s mega brewpub in Salisbury where 25 people make the place seem deserted. 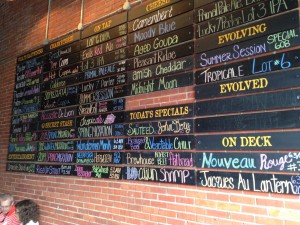 But it didn’t seem like much of a worry about feeling deserted. Just about every table I saw was filled. Of course this was a beautiful evening during the high season of vacations. That being said, going to Evolution from the Ocean City area is not trivial. Upon leaving OC, you have about 30 minutes of travel ahead of you. It is certainly worth the drive though.

When Evolution left Delmar, it wasn’t just to get into a larger space. But it was an opportunity for the owners of Evolution to show off one of their other talents, Restaurant management.

Before Evolution Brewing existed, Tom and John Knorr had opened just a few restaurants. Their restaurant group, Southern Boys Concepts, currently has five restaurants including Evolution Public House. While many see restaurants wither and die in the first year, the Knorr’s know how to keep people coming back.

So even if you have a few in your group that aren’t craft beer lovers, they are still going to enjoy a trip to enjoy the great food at Evolution. The menu features amped up versions of many old favorites, like a not so basic Grilled Cheese to a Duck Confit Burger. It also features freshly shucked oysters and a Artisan Charcuterie and Cheese platter that I wish I had ordered.

But of course beer is also a big draw for Evolution. The leading selling beer style in the US is the India Pale Ale, and having a solid IPA is certainly not going to hurt a brewery. Lot 3 and Lot 6 DIPA are certainly two of the best made in Maryland, and in my eyes two of the best period. 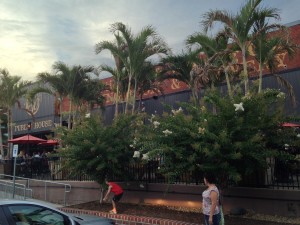 Adjacent to the Public House is the Tasting Room. This is where you go to get Evolution shirts, hats, growlers and of course it’s a great place to sample the newest Evolution beers. This is also where you’d go to get a tour of the brewery. I made sure to stop by and get myself a growler of Lot 3 on the way out. Fortunately for me, it was accidentally filled with Spring Migration! But finding this out after you’ve poured yourself a full pint is a little shocking to say the least.

Now to the second half of my beer trip.

I was staying in Berlin, Maryland this trip. And what is in Berlin? Yep. Burley Oak. During my visit to Burley Oak they were missing a few of their usual offerings. While this was sad, the reason why was certainly not sad. Their brewhouse was out of operation for a few days while they were in the process of installing a brand new brewhouse! This was pretty exciting. This upgrade triples their brewing capacity, which has got to be exciting.

But the funny thing about the upgrade is what Bryan Brushmiller said about it, “No more.” Meaning he doesn’t want to go any larger than this. Of course time will tell if he sticks to that comment or not. And really it’s a refreshing thing to hear. In an age where Stone is expanding to Europe, Sierra Nevada, Oskar Blues, New Belgium, and Green Flash are all in the process of building second breweries on the east coast, Burley Oak is stating they don’t want to get larger than this. He’s not the only brewer that has made that statement. Vinnie Cilurzo of Russian River has resisted the need to expand for years, despite high demand to do so. 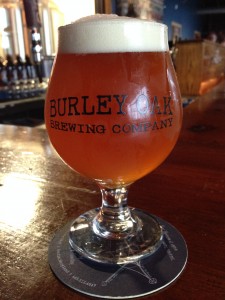 To me expansion is a finicky beast. While it can do a lot of good, it takes the founding brewers away from brewing, and it changes your identity. Bryan told me that he loves brewing, and he doesn’t want his position to change from brewer to brewery CEO managing finances while an automated brew house does the bulk of the work.Burley Oak is unique in other ways than just their philosophy on growth. Burley Oak is one of the few brewers nationwide that farms and uses their own barley. Of course this has been an evolving experiment, as barley is very particular about where it’s grown. Soil and environmental variables dictate what strains can be grown where. Bryan continues to dial in hybrid strains of barley, to find what will give his both great yield and flavor. He just loves to be local, and it is so cool to see. Many preach about their love of local, but few execute it so well. Soon Burley Oak will also start malting their barley on site. They are in the process of converting a structure on their property into a malthouse. Not only are their malts local, but their hops are grown in nearby Selbyville, Delaware. I told Bryan I’d love to see them start growing some of their own hops too, so that they could produce some truly estate beers. I have always seen estate beer as the Holy Grail of local beer production, growing and controlling every aspect of your beers’ ingredients is as local as it gets.

Over the last few years Burley Oak has grown from a brewer that had great beer sometimes, and “interesting” beers at other times, to being a mature brewer that loves to experiment, just loves what he does, and is producing great beer consistently.

Burley Oak produces a wide array of styles. From Belgian styles, to German, to pure American. More often than not it seems the beers are more inspired by Belgian styles or German styles, and that they try to recreate each style with their own brand of quirkiness.

Some must try brews from Burley Oak are Waffle Stomper, Superfun Stout, and Afternoon Delight. Waffle Stomper is a Belgian IPA that is just a great example of this hybrid style. Classic Belgian yeast flavor with some awesome hop shine. Superfun Stout not only has one of the coolest names of a beer ever, but is celebrating the guys at SuperFun Eco Tours, a local tour company that will show you around Assateague Island via bicycle, kayak, canoe or SUP. And the beer lives up to its cool adventurous name. This stout is a delicious oatmeal stout that is bigger than its ABV and smooth as silk. Lastly Afternoon Delight. Perfect thirst quencher for the beach bound adventurer. Low in ABV but loaded with Citra goodness. A great treat after riding around Berlin on one of the Burley Oak’s complementary loaner bikes.

Holiday Gift Guide for the Beer Lover (and brewer)

SYNEK – A tale of acceptance