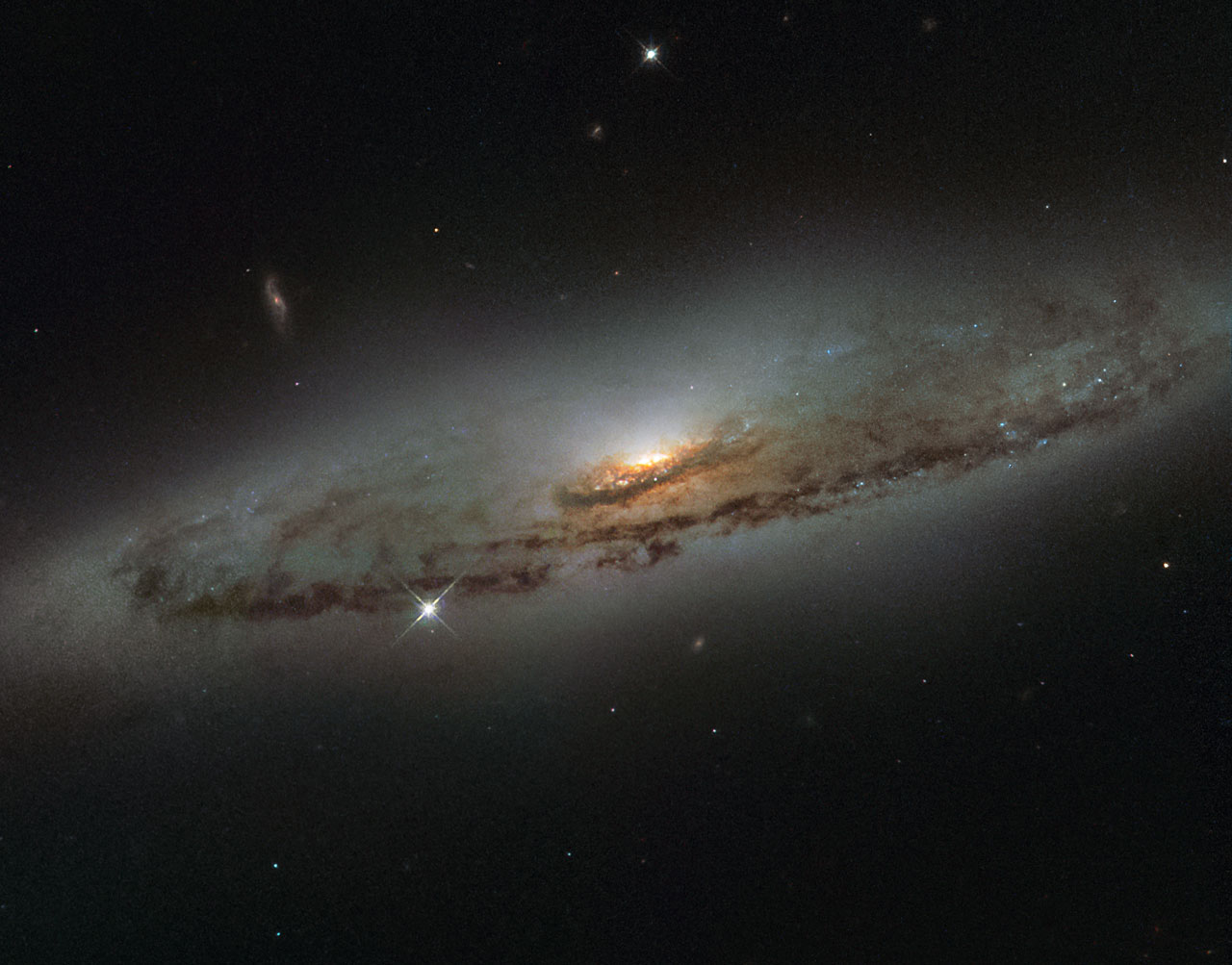 This NASA/ESA Hubble Space Telescope image shows the spiral galaxy NGC 4845, located over 65 million light-years away in the constellation of Virgo (The Virgin). The galaxy’s orientation clearly reveals the galaxy’s striking spiral structure: a flat and dust-mottled disc surrounding a bright galactic bulge. NGC 4845’s glowing centre hosts a gigantic version of a black hole, known as a supermassive black hole. The presence of a black hole in a distant galaxy like NGC 4845 can be inferred from its effect on the galaxy’s innermost stars; these stars experience a strong gravitational pull from the black hole and whizz around the galaxy’s centre much faster than otherwise. From investigating the motion of these central stars, astronomers can estimate the mass of the central black hole — for NGC 4845 this is estimated to be hundreds of thousands times heavier than the Sun. This same technique was also used to discover the supermassive black hole at the centre of our own Milky Way — Sagittarius A* — which hits some four million times the mass of the Sun (potw1340a). The galactic core of NGC 4845 is not just supermassive, but also super-hungry. In 2013 researchers were observing another galaxy when they noticed a violent flare at the centre of NGC 4845. The flare came from the central black hole tearing up and feeding off an object many times more massive than Jupiter. A brown dwarf or a large planet simply strayed too close and was devoured by the hungry core of NGC 4845.

“the man who fell to Earth was raised up and made the lightning bolt of the Virgin.”

I don’t usually attach much importance to scientific changes to the names or status of planets or stars. This is partly because the naming of the planets most-used in astrology came from people who were astrologically minded; long before there was any isolated science-astronomy involved. However, when I learned that a group in Europe had named a new constellation for the late David Bowie, the news immediately caught my attention.

The Stardust team, who registered the constellation, is comprised of Belgian radio station Studio Brussels and MIRA Public Observatory. The new constellation is enormous, starting in Virgo and spanning through the much of the Southern Hemisphere to reach the Octans.

The Stardust team placed the constellation Bowie near the location of transiting Mars at the time of David Bowie’s death. At that time, Mars was in Scorpio in our Tropical zodiac, which means it was physically aligned near sidereal Virgo. The constellation Bowie is a lightning bolt starting at the star Spica, the brightest star in Virgo, and emanates from the wheat she holds in her left hand and ends at Delta Octantis, a star 25 times the size of our own Sun, with the very interesting fact of being the pole star of Saturn’s rotational axis.

What are the implications of Virgo the virgin, essentially the archetypal fertile Mother of Earth, now with her own lightning bolt, a symbol of an energy burst?

In relation to David Bowie’s image from the Alladin Sane era, the lightning makeup, dividing his face with the bolt shape used in the constellation, could possibly symbolize some duality within himself, or within humans. The lightning having been almost mythologically transformed from a modern human, now ascended to the ancient heavens as a stellar symbol.

But what is this telling us? The Virgin has issued forth a lightning bolt. The shape of this bolt transformed from the Bowie’s self-portrayal in the Alladin Sane/Ziggy Stardust era, and who later portrayed a man who fell to Earth, then at the time of his death, officially placed in the heavens as lightning, and sent forth from the Virgin’s left hand as a new symbol of inspiration of the link between all things on Earth and in the heavens, timelessly expressed in the axiom, “As above, so below”. Or perhaps it is a warning not burn up our planet’s limited resources?

The bolt ends at the star Delta Octantis, which is the Pole star of the planet Saturn. David Bowie was a Capricorn, and Saturn is the ruler of Capricorn, so it is more than fitting that the lightning points to the axis of Saturn’s rotation.

This new Bowie constellation gives us an opportunity to see that the myths and legends of our history, might have been real to someone at some other time, before they were reduced to symbol and myth. Like a Phoenix of the current era, being interlocked with Virgo is looking to be a well-deserved place for such an accomplished and unique person. A legend of our own time, which we are witness to, both on Earth and in the heavens, might survive the ages as Bowie, The Lightning Bolt Of The Virgin, who fell to earth as half man and half spirit and ascended to her left hand, to remain there as a bolt of light issuing from the wheat in her left hand. 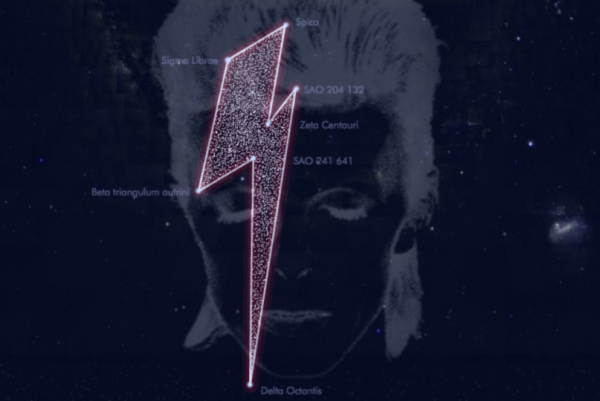 George Hagegeorge is a musician, remixer, and music producer who has produced over 65 records. George has worked as a photojournalist for several newspapers in Maryland and currently works with video and multi media production. He first developed an interest in looking at the stars at age 5, when his father pointed out the constellation Orion in the night sky. George received his first telescope at age 7 and never lost his fascination with the planets. He has been studying both modern and ancient astrology for over 25 years. (Photo Credit – Cheryl Fair) 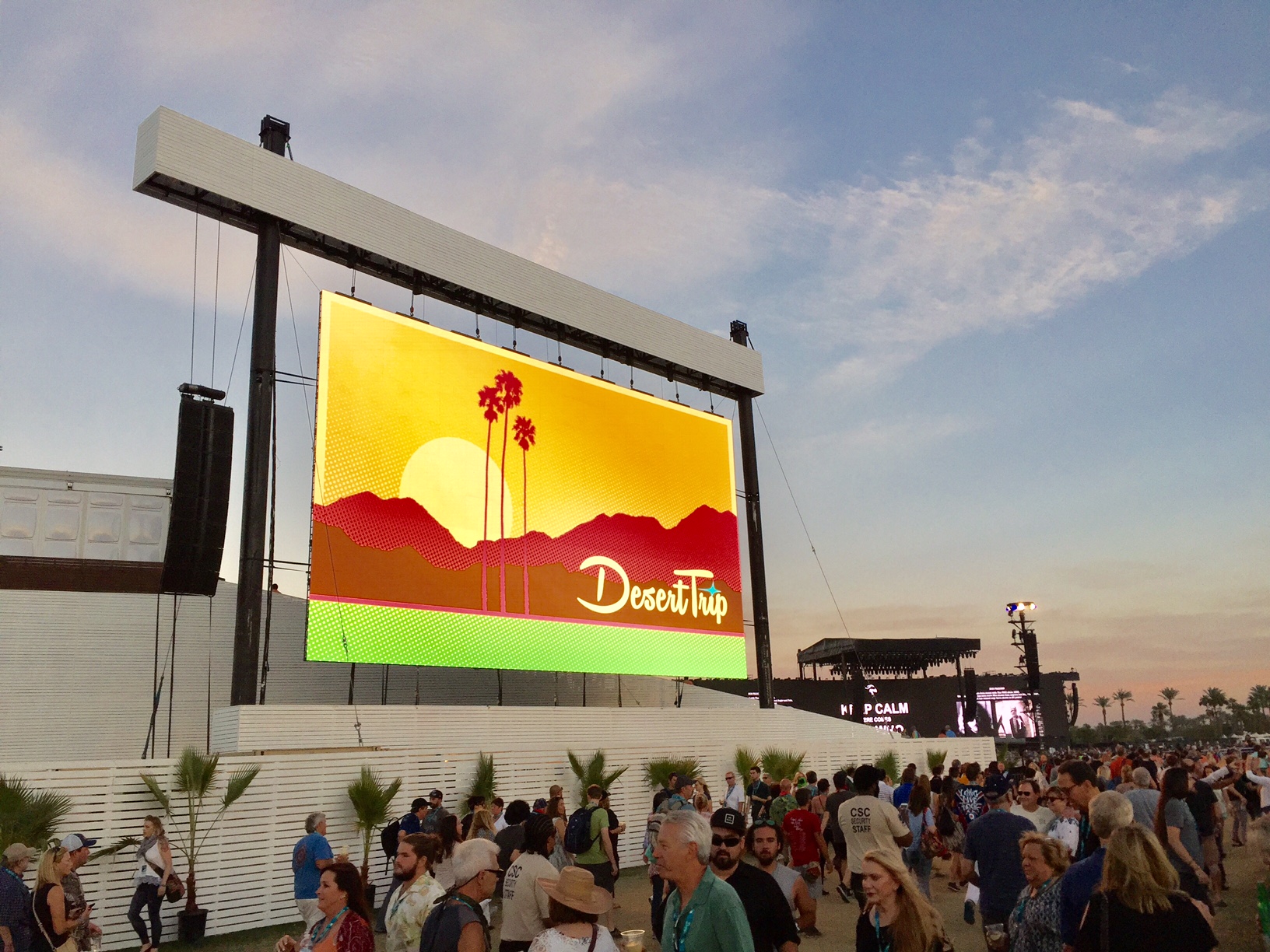