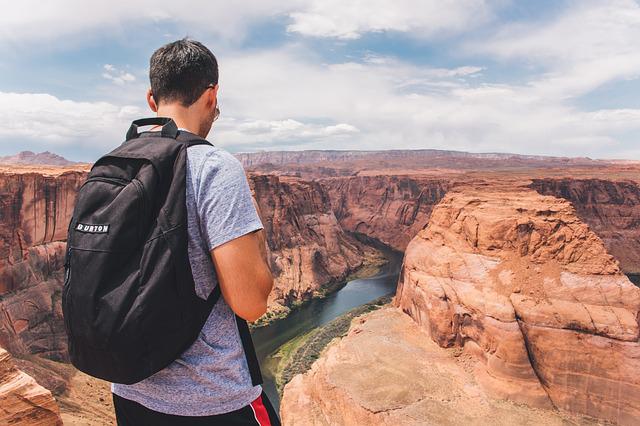 I mount the mule,

settle into my chaps,

pull up my bandanna.

The cowboy cloth, I thought

only an accessory, until

the wind and the mules’ hooves

My father, the gentleman rancher,

his friends at the

pushing us up on the

scheduling their voyages of

and the mule, whose name

I have forgotten, from catapulting

into the wondrous crater,

Attempting to allay our fears,

packing steaks and potatoes down

to Phantom Ranch on the Colorado.

We, they assured us,

were on the backs of survivors.

Fear is a funny thing.

was akin to my first plane ride.

I took a deep breath.

Any fears of living as

Fear is a funny thing.

a door gunner in ‘Nam,

then a deputy sheriff

was all white-knuckle on his mule,

meditating at each magnificent

I fathomed the lives of the

the work of trail builders,

hearts of the path runners,

rendered moot all prior tensions

between me and Dad,

the trip a privileged peace offering,

What could be better than this?

Then the rafters on the Colorado

River of the Good Guide,

rushed into the gallery.

hiked down, then asked for a helicopter.

risky for pilots, they told him.

If he could escape

climb out of the Canyon.

Candice Bergen hiked down without

They gave her a sleeping bag.

Favors, I guess, were extended only

to gentleman ranchers and their sons,