I first wrote this story for a high school English class. My teacher, Mac Ross, was a great guy. He had been in the US Signal Corps in Thailand during the Vietnam War and at first I thought he was a strict military man. As I got to know him better, I realized he was a thoughtful, intelligent man who cared about his students. He took the time to get to know us and give us relevant feedback, whether it was about school or personal problems.

I stayed in touch with him over the years. He went on to be an editor at Harcourt Brace Jovanovich in New York before moving to the Washington area where he started Ross & Co., which specialized in direct marketing. He spoke at business development seminars worldwide, often in collaboration with business consultant Jay Abraham.

I suppose one reason I liked him was because he liked what I wrote and gave me positive feedback. He gave me the freedom to write about anything and in any form from poetry to essays. The last time I saw him before he died I told him I was thinking about writing a book. He seemed excited about it and encouraged me to do it. I was sad he did not live to see it.

While I was at boarding school in Texas, my parents relocated to Bogota, Colombia where my father became the Ford Foundation Representative for Colombia and Venezuela.

My parents had downsized from a two story large four bedroom house to a small one story four bedroom house. Most of our things were gone. My mother got rid of almost all the books, all my stuffed animals, my Barbie dolls, and I don’t know what else. I can’t blame her, she had to send everything air freight and could only send a limited amount.

They weren’t things I was particularly attached to at the time and I took it in stride. I just didn’t have the luxury of keeping things. I was learning to let go. There were a few things that ended up in a trunk and were my treasures that followed me around the world for a while. Other than that, I didn’t have much.

At 15, I had just finished my freshman year in Texas where I had many trials and tribulations. Finally I was back in a civilized country where they spoke a language and had a culture I could understand. I think Latin men provided me with the education I needed to deal with the world at large. I was followed everywhere and it never mattered how rude I was, they never took offense. They would just shrug and move on – eventually. That is not to say they were not persistent. They were persistent, but they were never violent. When men followed me in the U.S., I was frightened because I imagined they had something evil on their mind like robbery or rape or murder but in Latin America, I never thought that. They were just out for the chase. At least that is how it used to be when I lived there many years ago. Bogota has changed a lot in the last 40 years, but at that time, it was a great place to live.

The first summer I was there my parents and I took a trip to the coast by car. My father was a beach fanatic and somebody in his office told him he would find the most beautiful pristine beaches imaginable at the coastal village of Tolu. Since he had to go to Cartagena on business anyway, he decided to make a trip of it and stop in Tolu and the resort town of Santa Marta as well. The trip was 600 miles almost entirely through the Andes Mountains with hair-raising drop offs on the side of the road. We stopped for a couple of days in Medellín, a city that was later known for its drug cartel. At the time, it was a small city nestled in the mountains with a lot of old churches. My mother had a thing about Catholic churches. If there was a church anywhere nearby, we had to go see it. It wasn’t a religious thing; it was a tourist thing. She wanted to see the architecture, the windows, and the statues. It used to really embarrass me to have to go into all these churches where people were praying just so we could snoop around. That was my teenaged view of it anyway.

The morning we left Medellín, we stopped in a small corner restaurant for breakfast. All we wanted was some orange juice, coffee and rolls. I spoke Spanish fluently with no accent. My father spoke Spanish fluently but with an accent. We went up to the counter and I asked for three orange juices – jugo de naranja. Blank stares answered my simple request. I could not make them understand what I was saying. I had to resort to pointing and acting in order to get three orange juices. We decided that they saw so few foreigners they just assumed we did not speak Spanish and could not process the fact that we did.

On the way down from the mountains, we had to follow a riverbed where much of the road had been washed away by flooding. The riverbed had cliffs going up on either side, with the river in the middle, and the road was to one side of the river. Where the road was washed out, there was no place else to go but in the river or hug the cliff. Fortunately there was almost no traffic and we were able to manage it, although we all had white knuckles by the time we passed through the mountains.

As we got to the coastal flatlands we started looking out for the road to Tolú. We were all very excited. The road turned out to be a narrow rutted lane with overgrown vegetation on either side. We said, no problem, this was good, it meant it was unspoiled by the overuse of tourists. The village of Tolú was small. There was a small square in the middle of town but the main road was just past the center and ran along the ocean on the beach. Yes, the beach had become a road with buses barreling down it at high speeds. There were no swimmers or sunbathers – they would have died from the exhaust fumes first and a car accident second. Since it was late in the day, we realized we had to stay the night, so we found a small hotel on the beach that looked passable. We were shown to a “suite” that had two rooms and five beds and a huge bathroom that only had cold water and a millions cockroaches. My father got up several times during the night to spray his mattress for bugs. We left early the next morning. When we got back to Bogota my father told the person who had recommended Tolu all about our experience. Of course, the person had never actually been there. So much for pristine beaches.

From Tolú we drove to Cartagena, the old Spanish outpost. There was a fort on the hill that had tunnels going down to the water. Niches were cut into the tunnel for soldiers to stand with their rifles and shoot people as they ran down the dark and claustrophobic tunnels. It all made me very uncomfortable. Cartagena was often visited by pirates as well as by Spanish ships. Under the water was a heave chain set up to keep the boats from entering on one side of the bay. Those who didn’t know about the fence, sank. Cartagena itself was a beautiful colonial town.

Our next stop was Barranquilla, another big port and more of a vibrant busy bustling city, and our final stop was Santa Marta, a small resort town that did have beautiful beaches. Luckily we flew home from Santa Marta so we didn’t have to repeat the treacherous drive.

— from Expat Alien, My Global Adventures

I looked up Tolu on the Internet and Wikipedia says:

The fishing town has now become a popular weekend and holiday destination for Colombian tourists, particularly those from Medellín.”

I guess things have changed… 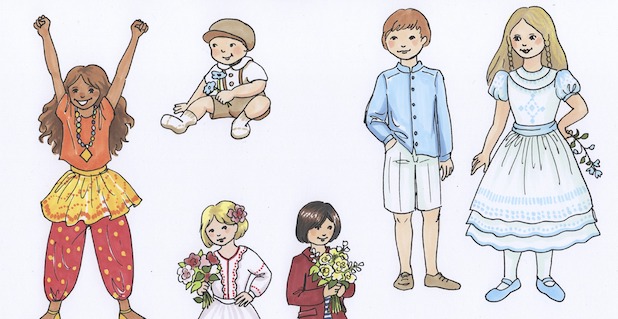 Things to consider before purchasing clothes for your growing children