Listen to this article
By Jeremy Bauer-Wolf

Little attention has been called to the political battle waging in Baltimore County’s District 6, comprising Dundalk and Essex. With two longtime Democratic incumbents — Sen. Norman Stone, who has served in the Senate since 1967, and Del. Sonny Minnick — calling it quits, a band of candidates from both parties has rushed to fill three open seats.

Twenty — 11 Democrats and nine Republicans — have filed to run for the three House of Delegates seats, while four will be competing for the Senate spot.

The acknowledged frontrunner in the races is two-term Del. John Olszewski, Jr. who is vying for the Senate position, with his all-Democrat ticket, “Our Team”  composed of incumbent Del. Mike Weir Jr., as well as allies Eric Washington and Ed Crizer.

With Olszewski Jr. making a grab for the Senate, and Minnick retiring, two Delegate seats are open.

“Our team” slate hoping to win the seats

A former educator as both a teacher in the Baltimore County school system and adjunct faculty at Goucher College, Olszewski Jr. carries a hefty campaign account — nearly $127,000, according to the most recent report, and a long history in the Dundalk community, having grown up in the area. His campaign signs with his name alongside Weir’s, Washington’s and Crizer’s litter the district.

Weir was elected to the House of Delegates in 2002, his father, Mike Weir Sr., retiring that same year. Weir Jr.’s website touts his commitment to cleaning up the Chesapeake Bay, having served on multiple state commissions drafted to study the subject. He serves on the Environmental Matters Committee. His campaign account contains just above $9,500, according to the most recent campaign finance report in late May.

Newcomers Washington and Crizer both have ties to the Olszewski family.

Washington was appointed by Olszewski Jr. and Weir Jr. to serve on a state commission that coordinates with a federal civil rights program, and was granted by Olszewski Sr. membership on the Human Relations Commission within the Baltimore County Council. Crizer, the former Baltimore County Board of Appeals chairman, also is a known confidant of the Olszewskis’, according to the Dundalk Eagle. Washington’s campaign account lists cash on hand at about $3,400, while Crizer’s is considerably larger at roughly $17,000.

The quartet boasts strong resumes and a community following, but their competitors aren’t making it an easy fight.

Democrat Nicholas D’Adamo Jr., a former long-time member of the Baltimore City Council, brings with him campaign funds from his time on the council, nearly $89,000, according to the most recent campaign filing, and he’s already spent more than $28,000 during the primary.

In a recent interview, D’Adamo likened his funding to a war chest accumulated through his 24-year tenure on the council. D’Adamo said his strategy is grassroots — he’s typically out door knocking around sections of the district from 6 p.m. until dark every day.

Also in the race is Jake Mohorovic, a Democrat and former member of the House of Delegates who served until 2003. Mohorovic presented at a public forum May 14 in the Dundalk North Point Library, accusing then Gov. Parris Glendening of gerrymandering and subsequently forcing him out of office early.

Mohorovic was among a contingent of both Democrats and Republicans candidates at the forum who criticized the “Our Team” slate for missing the event and not keeping touch with the needs of the community.

“If [they’re] not here, what are they going to do in Annapolis?” Mohorovic said.

“I know a lot of people have a problem with the elected officials, and that’s the long, big distance between elected officials and the community groups,” Mirabile said. “We can’t get through to them what we need, we pay our taxes … but they don’t listen, for whatever reason.”

Mirabile is running as a Democrat, but sides with the GOP on multiple issues, particularly opposition to same-sex marriage, the recent increase in the minimum wage, and the Fairness for All Marylanders Act of 2014, which affords the transgender community extended protections.

Olszewski Jr. defended his record as a Baltimore county community activist, and said he was unable to attend the forum that night because he was taking a final exam for his PhD program — in public policy — at the University of Maryland Baltimore County. Members of his ticket also had other commitments, he said.

“I would never criticize a candidate for not being able to attend on a given night without knowing their reasons,” he said.

“Between June 24 and November I would welcome having forums where Republicans and Democrats are there. I welcome that and stand by my bipartisan record. I think I’m one of the most bipartisan legislators in Annapolis, which is something missing quite a bit in the state capitol.”

Here’s a roundup of fundraising and endorsements in the race from our monthly report published Wednesday.

These are the groups whose endorsements we’ve listed and the abbreviations we’ve used.

Here are the groups whose endorsements we’ve listed and the abbreviations we’ve used.

Here are the groups whose endorsements we’ve listed and the abbreviations we’ve used. 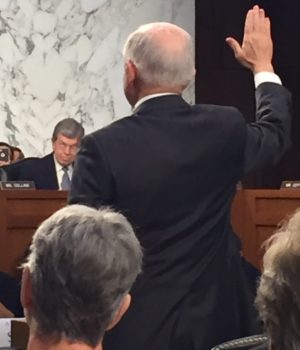 Maryland Association of Counties in Ocean City: Not much has changed