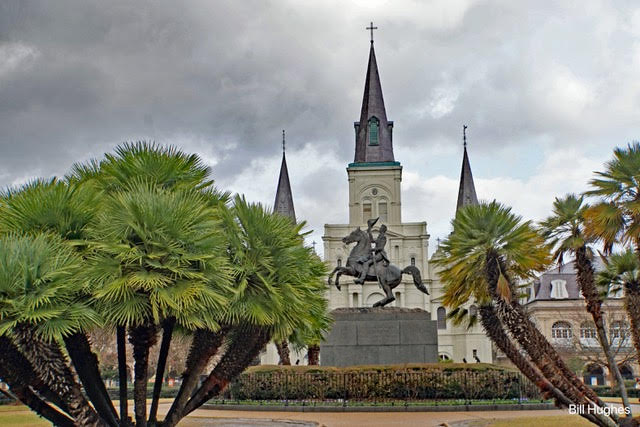 It was the thick of Mardi Gras season, only three years ago, when I landed in New Orleans, Louisiana, on Saturday morning, February 3, 2018. Mardi Gras is a celebration, a festival, a carnival, like no other that I have ever witnessed. Its origins date back to pagan days. The French Catholic settlers can take credit for bringing it to the New World.

By tradition, it is launched after the Christian feast of the Epiphany and continues right up until the day before Ash Wednesday – aka “Fat Tuesday.” Now, that’s a lot of opportunity for serious partying, with countless beads and other trinkets also getting tossed around in a friendly fashion.

If you come to Mardi Gras, bring your walking shoes and an umbrella. Trust me, you will get plenty of exercise taking in all the fun-makings. The weather is tricky. It can pivot from a sunny day to a hard rain in minutes. The bottom line, however, is this – the revelers won’t be stopped!

My first-class hotel, Homewood Suites by Hilton, was centrally located and only blocks from the fabled French Quarter. It is there where the carnival atmosphere is mostly played out in non-stop fashion. On top of its being Mardi Gras season, the “Crescent City,” on the Mississippi River was also celebrating its 300th birthday this year.

Around town, I was there for a week – there were endless street parties going on, with plenty of dancing; lavish dinners, masked balls, colorful costumes, marching bands, huge rolling floats with exotic themes; parade horses; and serious looking dudes carrying torches. I also saw, here and there, particularly in the “Quarter,” a few unfortunates, perhaps on drugs and/or alcohol, sleeping off their “high” in a doorway saturated with their own urine.

By tradition, purple, green, and gold are settled as the Mardi Gras colors. A lot of the shirts sold to the tourists were in those colors. Artists selling their paintings/drawings were endemic. The food is special and sumptuous. There was also a strong police presence. I did witness one arrest for a non-violent offense. Supposedly, the suspect was shooting a video “up a woman’s skirt!”

In 2005, the City of New Orleans took a hard blow from the horrific effects of Hurricane Katrina. It has continued to fight back gallantly from that major disaster. Recovery has been slow, very expensive, and in some areas – substantial. But some, especially in the black community, complain about being left behind.

New Orleans has a Black majority, currently about 60 to 40 percent. The Catholic influence is still heavy. The mayor in 2018, Mitch Landrieu was of French ancestry. He was replaced on May 7, 2018, by LaToya Cantrell, who is Black.

In between taking pleasure in the festivities, I toured the historic battlefield at Chalmette. It’s located outside of town and to get there I boarded the paddlewheel vessel, “Creole Queen,” for the journey.

On January 8, 1815, the invading British imperial forces, with superior numbers, suffered a stunning defeat at Chalmette at the hand of US troops, including free blacks, under the command of Maj. Gen. Andrew Jackson. He labeled the British the “common enemy of mankind.” That magnificent victory launched Jackson on the path to the White House (1829-1837). It also eventually led to this popular ballad about the battle by Johnny Horton.

Enter the National WWII War Museum. Put this one on your “Don’t Miss” list. It’s located down on the waterfront. Actor Tom Hanks brilliantly narrated a film, “Beyond all Boundaries,” on the conflict. It made my day. Next door, at the Audubon Museum, Meryl Streep, narrated a documentary on the vanishing wetlands that surround New Orleans. Climate change and some poor planning, continue to put the fast-fading wetlands at risk.

I also enjoyed a walking tour of the Quarter with a guide. We checked out Jackson Square and the St. Louis Cathedral, along with the background on many of the Quarter’s historic buildings. I was surprised to find a store in the Quarter – the Cigar Factory – that actually “makes cigars.” It’s at 415 Decatur Street. When you walk in you will find workers hand-rolling the cigars. The last time I saw a site like that was on my visit to Havana, Cuba, back in 2016.

The walking tour also included a visit to “St. Louis Cemetery #1.” Buried there, among others, is the architect of U.S. Capitol and the Catholic Basilica of the Assumption in Baltimore – Benjamin Henry Latrobe. He died in the yellow fever epidemic of 1820, along with his son. Latrobe was born in England, but his mother was of Pennsylvania-German stock. See more here.

Close to the Latrobe’s final resting place is a pyramid-sized tomb. It is owned by the actor – Nicolas Cage! At one time, he also owned a number of mansions in New Orleans. The tomb is a nine-foot-tall stone monument. Not all the locals are happy about Cage’s pyramid in a beloved cemetery, which is held sacred by so many.

I just loved walking on Canal Street. It is the widest roadway in America. It forms the upriver boundary for the city between the Quarter and its uptown. In its middle, “the neutral ground,” streetcars run in east and west directions.

One day while in the Quarter, I witnessed a “grease poll” contest held at a hotel. Four young ladies participated. There was a band, of course, to give it some drama, and an emcee, with plenty of champagne, passed around to lift everyone’s “spirit.” The crowd loved it and gave the winner a huge round of applause.

Wherever I went on my strolls, music was in the air. On just about every street corner, particularly in the Quarter, you will find energetic music-makers; doing jazz, rock & roll, playing bagpipes, fiddles, drums, whatever; some solo performers, but most playing in a group. Indeed, music is the soul of New Orleans.

You will also find monuments in the city to its great performers of yesteryear, such as: “Fats” Domino, Al “Jumbo” Hirt, and Pete Fountain. When I was younger, I saw “Fats” perform at the Coliseum in Baltimore. His famous ballad, “On Blueberry Hill,” still rings in my ear.

No visit to New Orleans would be complete without taking in a swamp boat tour. They are found just a short hop from the city in Cajun country. In fact, my guide on this trip was of Cajun stock and he was story-teller par excellence. I enjoyed the beauty of the bayou, learning the history of the marshlands and the folks who live nearby, and seeing lots of alligators, snakes, turtles and birds.

On New Orleans’ Riverside is found a “Monument to Immigrants.” This city is “Exhibit A” in its rich experience with growing into a major metropolitan hub, thanks to its evolving immigrant populations. Take the Irish for example. They have a rich history in New Orleans, dating back to the late 1700s, up till the present day. Check out: New Orleans online.

Finally, New Orleans is a one-of-a-kind experience. If you haven’t already done so – post Pandemic- put “The Big Easy” on your bucket list!

Taking Your Workouts to the Next Level