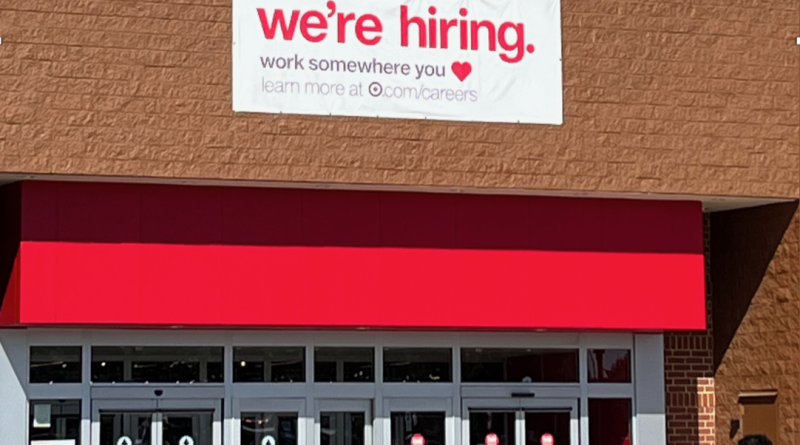 Target is hiring. The banner on the front of the Target Greatland in the Columbia Crossing Shopping Center. (Les Cohen)

Yes, we’ve all noticed.  There’s a disturbance in The Force.  Some call it “The Great Resignation,” but it’s much more complicated than that.  The output of our economy is down and yet unemployment is less than 4% which is effectively “full employment” given that there are always people out of work for benign reasons.

Large and small businesses everywhere are hiring.  When was the last time you tried to find someone at Home Depot to help you?  Well, don’t bother.  …We went to the Silver Diner for lunch the other day because it was hot out and they have covered outdoor dining, but the tent was closed because they didn’t have enough waitstaff to keep it open.

I live in the ‘burbs.  Driving around, there are “Help Wanted” signs everywhere.  This is clearly not your parents’ recession.  Textbooks used to talk about inflation being about too much money chasing too few goods.  Not anymore.  The FED is hell bent on killing our jobs-rich market, not because that’s the objective, but because raising interest rates is all it knows how to do.

And we’re not just talking about low paying, minimum wage jobs that are going begging.  Walgreens, for example, where the average Pharmacist already makes $133,000, just increased its signing bonus for those professionals to a whopping $75,000.  Job openings are in all segments of the economy, from minimum wage to senior management positions.  ZipRecruiter, one of the large online job search services, is claiming “128,726 jobs within 30 miles of Baltimore, MD” from among which people interested in work or changing jobs can choose.

Whatever the reasons and for who knows how long it will last, there are all sorts of job openings in the suburbs.  Unfortunately, many neighborhoods in Baltimore City continue to suffer from high un- and under-employment.

It’s when someone is technically employed, but working for a wage or salary that is below what they need to provide their family a decent living – or at a job that doesn’t realize that person’s potential.  Is it better than being outright unemployed?  Not necessarily, because you’re too busy working to acquire the skills and search for better, more satisfying work with career potential.

Turns out there’s a simple, very affordable two-part solution to the problem of unemployment, under-employment and poverty in Baltimore.  On-the-job-training is one part.  Some employers need to be incentivized to train new employees to master the work they’re going to do.  We need to stop training people at the low end of the economy and then releasing them into the market without specific jobs to take.  …And without the means of getting to jobs for which they are now qualified.  More about this point in a moment.

Did you know that Baltimore City government is experimenting with a program, “The Baltimore Young Families Success Fund,” that assures 200 parents 18 to 24 years old an income of $1000/month?

Like so many of the City’s “do good” programs to stimulate the economy, that sounds nice, but think about it.  The minimum wage in Baltimore is $12.50 per hour for companies with 15 or more employees, on its way up to $15.00 in 2025.  The minimum wage in Howard County will be $15.00 per hour on January 1, just a few months from now.

At $12.50 per hour, a person earns only $100 per eight-hour day.  So, $1000 every two weeks.  The $1000 from the City is the equivalent of working only half-time and that’s at minimum wage – with zero benefits.  Many if not most of the job openings in the suburbs pay well more than minimum wage and they’re full-time, many with impressive benefits and on-the-job-training for positions for which the unemployed person doesn’t otherwise qualify.

“Aren’t most of these “Now Hiring!” jobs low-end restaurant and other retail positions?”

No.  Go to Indeed and ZipRecruiter.  Look around.  The job openings are all over the jobs spectrum.  But let’s assume that they are mostly low-end positions.  At least they’re jobs that could – without exaggeration and almost immediately – employ tens of thousands of Baltimore residents who are currently struggling every day to get by.

One example is Panda Express, the fast Chinese food chain.  The sign on the glass in the picture is a little difficult to read because of reflection, but it’s worth the effort.  Note the levels for which they are hiring, from Kitchen Team workers at $15 to $18/hour to General Managers at $68,000/year plus bonuses.  And now Google “Panda Employee Benefits and Perks” at Glassdoor, the jobs service.  Look at the benefits in all the following categories…  Insurance, Health & Wellness, Financial & Retirement, Family & Parenting, Vacation & Time Off, Perks & Discounts and Professional Support.

So why don’t Baltimore’s un- and under-employed take advantage of this jobs-rich window of opportunity?  Well, one big reason is that a great many of them can’t get to these jobs in the suburbs.  Not really.  Either they don’t have a car or it’s an older one they can’t easily afford to operate and maintain – or they have one, but can’t leave it in a parking lot all day without their family having access to it.

“What about public transportation?”

Are you kidding?  Bus service from Baltimore to the suburbs isn’t door-to-door.  Not even close.  Timing issues aside, that bus could drop you miles from your job.  Now what?

What Baltimore needs to do – with state assistance and support from socially-concerned car manufacturers – is guarantee auto lease or purchase payments for workers finding qualified jobs in the suburbs.  For new, relatively inexpensive, fuel-efficient cars under long-term, comprehensive manufacturer’s warranties.  Properly structured, the program wouldn’t require that the city go out of pocket to make car payments which should be between $200 and $300 per month.  This program should also help provide second vehicles for Baltimore families where both adults are interested in working.

Not only are these monthly car payments only a fraction of the City’s $1000 guaranteed income for just 200 people, they’ll make it possible for thousands of Baltimore families to have real jobs, with benefits and long-term career potential.  Compare the benefits of helping people obtain work-friendly personal transportation to the total societal costs of dealing with ongoing, systemic un- and under-employment.  This should be a no-brainer for a city government paying attention.

If the City doesn’t want to guarantee payments, they can make monthly payments for the employee, to be reimbursed as a deduction from the employee’s earnings.

Enough said.  What do you think?