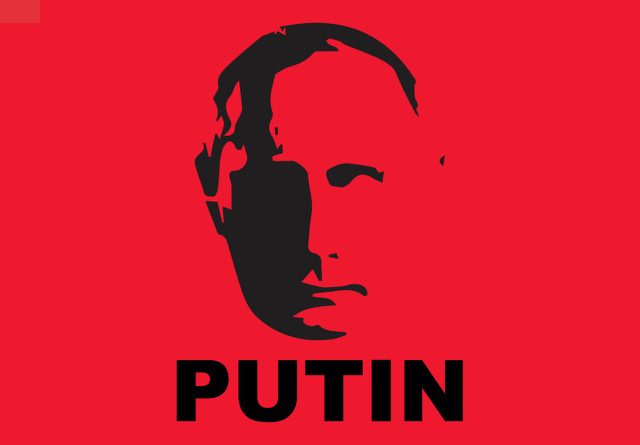 “This is genius.  Putin declares a big portion of the Ukraine – of Ukraine. Putin declares it as independent.  Oh, that’s wonderful.”  – Former President Donald Trump during a February 22, 2022, appearance on the “The Clay Travis and Buck Sexton Show.”

When I was a kid, back in the day when the fundamentals of my political sensibilities were still forming, I was introduced to the threat of nuclear war by messaging that had two major elements.

In the event of nuclear war, so I was taught in school, I could survive an attack by hiding under my desk or out in the hallway so that flying glass would be less of a problem.  To my credit, I didn’t believe for a moment that taking such precautions would make any difference.  Nor would trying to get home to my family’s bomb shelter, if we had one, which we didn’t.  If nuclear war were to start, living as close as we were to our nation’s capital, I would be toast – and so I stopped worrying about it, at least not consciously.

The other message was more reassuring.  We need our own arsenal of nuclear weapons, more scary than anyone else’s, because “no one wins a nuclear war” and “mutually assured destruction” was the only deterrent to their use.

I mean, who in their right mind would attack another nuclear-armed country with nuclear weapons.  The attack, met by a devastating counterattack, would be suicidal.  It makes sense, except that it assumes that the leaders of countries with nuclear weapons are logical thinkers who prioritize the welfare of their people and the planet in general over their personal needs.  But now the invasion of Ukraine by Russian forces and subsequent threats by President Putin have trashed that assumption.

It is disconcerting, isn’t it, whenever a foundational element of one’s thinking is proven to be entirely unwarranted?  Unfortunately, there’s a lot of stuff going on, threatening our democracy and capitalism, challenging the way we think individually and as a country.  High anxiety is blowing in the wind.

In less than a decade, we have had two historically breathtaking situations that are changing everything.  The first was the election of President Donald Trump due largely, but by no means exclusively, to the Democrats choice of a brilliant, but otherwise ineffectual candidate to hold The White House.  That too many Republicans ran for President in their primary didn’t help.  Overall, Trump won his party’s nomination with less than 45% of the vote.  A majority of Republican primary voters wanted someone else to run for President.  And then winning gave Mr. Trump the platform and moral authority to confuse millions of us and, in turn, threaten the integrity of our most important institutions.

Later, toward the end of his first and, thank goodness, only term in office, Mr. Trump became the first President to encourage and, quite probably, manage what amounts to an attempted coup.  The objective was to seize the government by stopping and then reversing the affirmation of a national election, the legitimate results of which favored his opponent.

I’m an educated adult, but I never dreamed for a moment that this could have happened in these United States.  If ever there was a rock-solid, stable democracy, it’s supposed to be ours.  Comparisons to the rise of a certain despot in Depression-era Germany years ago have been made – even though they don’t really apply – are nonetheless disorienting.

In the end, that a person so uninformed, unintelligent, unethical and, quite probably, as disturbed as Donald Trump could be elected President has done us all a huge favor by highlighting very significant shortcomings in our political system.  These are times, technologically and culturally, our founding fathers and mothers could never have anticipated.  His Presidency and continuing influence over the Republican Party may be just the slap in the face we’ve needed.  We need to get our national act together.  To do that, you and I need to revisit a lot of the underlying assumptions we’ve made and the conclusions and behavior they have supported.

And now, in Russia, President Putin has thrown caution to the wind with the reckless invasion of a sovereign country and is threatening use of nuclear weapons.  His back is against the wall.  His career and perhaps also his life, given the nature of Russian politics, are on the line.  And our response to all this rhetoric is that there will be serious repercussions if he uses nuclear weapons in Ukraine?

Really, like what?  Putin launches a few tactical nuclear weapons to scare Ukraine and the world into submission to his lunacy.  And we do what exactly?  Impose more sanctions?  Whine about our concerns at the United Nations where Russia remains on the Security Council, its veto power intact?  Act indignant?  Use conventional weapons to attack Russian forces in Ukraine and/or his nuclear weapons arsenals on Russian territory?

What counts, of course, is what Putin is thinking we’ll do?  How far can he push us?  What, if anything, does he have to lose by not doing whatever it takes, including the limited use of nuclear weapons, to somehow walk away with what he can construe to be a victory in Ukraine?

The problem is, we don’t know what he’s thinking or will do because he’s not a rational actor.  And only rational actors care about “mutually assured destruction” and the unwarranted killing of thousands of people because of some personal dream of a greater Russia and/or fear that Ukraine will one day join NATO.

It’s all nuts, isn’t it?  And that’s exactly the point.

For those government officials and strategists who practice “strategic ambiguity” in their admonitions to Putin should he go too far, we should seriously doubt they really have anything more than a simple list of options in mind.  Because there is no response, no good way to let Putin off the hook that will give him the victory he needs at a price we can afford.  Only pressures from inside Russia have the potential to affect an acceptable outcome.

If you think we’re running on empty now when it comes to the deluge of anxiety-producing crises with which we are currently dealing, can you imagine a country, a stock market, an economy, a world in which some lunatic has just used nuclear weapons – and has a whole lot more and bigger ones in stock?

So, whatever happened to the warm feeling that “mutually assured destruction” would prevent the use of nuclear weapons?  Turns out it was delusional, a textbook concept in a world that has way too many irrational players in charge or otherwise able to influence public opinion.

Note to self: The only way to make sure no one ever uses nuclear weapons is to make sure there aren’t any.  Not anywhere, including the United States.  Any other measures and theories of international politics are just missing the point.

Forget Christmas, give me Festivus