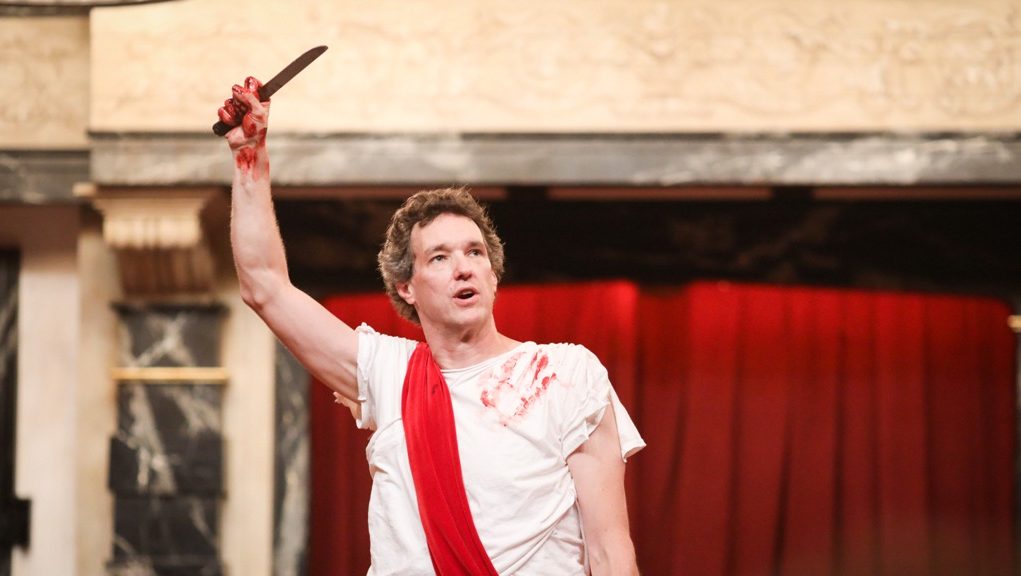 In the summer of 1608, the Jamestown Colony teetered on the edge of extinction. Meanwhile, back in England, William Shakespeare and his cohorts executed a pact for a year-round venue in London called the Blackfriars Theatre. More intimate than the Globe Theatre, Blackfriars would be a boon for the company and allow for “an explosion of innovative drama and staging” – something Shakespeare could only dream of with plays that were produced at the austere Globe.

Jamestown somehow survived its early years until relief ships arrived in 1610 – cementing the first permanent settlement in the Commonwealth of Virginia. And strangely enough, their survival set the stage for Shakespeare’s spiritual descendants to soldier on in the New World.

Today, a new Blackfriars attracts an international audience to the picturesque town of Staunton, Virginia.

The Center also dispatches with Roman-like efficiency a national touring troupe which brings the works of The Bard to venues from Maine to Texas.

We had the chance on a recent visit to Staunton to see both The Willard Suitcases (look for a review of that surprisingly excellent show later this week) and Julius Caesar.

If you’re rolling your eyes recalling ham-handed soliloquies in public park settings, or having a horrifying flashback to your English Lit teacher wearing a laurel crown in class, don’t fret. As ASC Co-Founder Dr. Ralph Cohen explained to our pre-show audience, Julius Caesar offers a lot to think about.

“The language is pretty straightforward, which is one of the reasons it is taught in high school, and it’s a great way to teach history.

“Audiences of the time would have immediately seen a correlation between Caesar and Christ.

“The death of Caesar is arguably the second most famous death in history, behind the death of Jesus Christ. And the lesson here is that no matter how bad a government may be, the mob is always worse.”

The mob in Julius Caesar may be populated by conniving politicians, professional soldiers, and exploitable plebeians. But, under the watchful eye of director Ethan McSweeny, the cast of this production rises above the howling herd – drawing the rapt audience into the action.

David Anthony Lewis is Julius Caesar – a character so filled with confidence he can’t seem to see his personal empire crumbling around him. Lewis has the gleam of a pop star as he glad-hands his way through the audience, only to leave his magisterial manner in doubt, as he crumbles at the hands of his vindictive assassins.

Particularly effective as the main conspirators are John Harrell as Marcus Brutus and Brandon Carter as Caius Cassius.

Though other statesmen enter into the crimson confederacy, it is Cassius and Brutus who carve out the bulk of the plan, and Harrell’s moderate manner provides a perfect balance for Carter’s layered headiness. Aided with solid senatorial turns by Michael Manocchio (Casca), Annabelle Rollison (Decius Brutus), and Sylvie Davidson (Cinna), the duo of Harrell and Carter ensure the fabric of the show never catches an unnecessary snag.

As Mark Antony, Geoffrey Kent is tasked with delivering what may be the most scrutinized soliloquy in theatrical history. Kent handles the part superbly and brought a few audience members to near-tears with the impassioned line:

“You all did love him once, not without cause:
What cause withholds you then, to mourn for him?”

Both strongly shine in pivotal roles meant to delineate the inherent “weakness” of Roman women. And a tip of the Imperial helmet to Ronald Román-Meléndez who appears as the Soothsayer among other parts, and to Constance Swain, who – even when sound asleep – is a ball of energy as the servant Lucius and in other vigorous roles.

Overall, the cast has a solid grasp of the material at hand. But the professionalism of this production is not limited to the actors on stage.

Eschewing a steady diet of Grecian togas, costume designer Murell Horton has also clothed the players in a warmer, more stately look. But not so warm that these Romans can’t move about freely – giving this Julius Caesar an added life which transcends the brutal death scenes.

The same can be said for the sound design (which is mostly natural) and the use of house lighting to illuminate the stage. Yes, that’s the way it was done in Shakespeare’s day, though thankfully no one here has to tend to hundreds of candles. But that’s the genius of the Blackfriars Playhouse and what makes this setting so unique. The intimate surroundings suggest Shakespeare and his fellows may have inadvertently invented immersive theatre long before anyone coined the phrase.

Audience members enjoy an experience at the Blackfriars Playhouse they won’t find anywhere south of the River Thames – even if you are sitting on a bench or a wooden stool, a few hours west of the Chesapeake Bay.

The seating may be a bit unburnished, but nothing that a cushion and a tankard of ale can’t fix. Add sandals, a sword, and a concave shield and you would be ready to join the action.

If you’ve avoided The Bard since high school because you’re still not sure what the word “Lupercal” means, don’t be ridiculous. The language of Shakespeare is more accessible than most modern “music”, and certainly more pleasing to the ear. Plus, there is a 2000-year-old history lesson in Julius Caesar that’s incredibly prescient today. And the nice thing is, you don’t have to journey back to the London of 1608 to see what Shakespeare was trying to convey.

Both the venue and this production are highly recommended.

The American Shakespeare Center’s production of Julius Caesar is running in rep with Antony and Cleopatra; George Barnard Shaw’s Caesar and Cleopatra; and a proactive new musical titled The Willard Suitcases. The fall line-up is running now – Dec 1 at the Blackfriars Playhouse in Staunton, VA. Running time for Julius Caesar is about 2 hours and 15 minutes with one ten-minute intermission.  For tickets and other information, including ways to plan your visit, please bookmark the American Shakespeare Center. Or call the Box Office at 1.877.MUCH.ADO. There are very helpful people who should be able to assist in answering any additional questions.

The Race: President Obama is going to lose the White House

One thought on “Blackfriars Playhouse: Staunton is the place to see Shakespeare”