If you have ever been on Facebook for any length of time, you have probably come across postings from the group that calls itself “The Other 98%.” During Thanksgiving week, they were constantly posting requests for Americans to support Wal-Mart employees by boycotting the chain on Black Friday. They feel Wal-Mart should pay their employees a wage they can live and raise a family on and are to blame for keeping wages down in other businesses nation wide. It also seems they are determined to over throw the American political and economic structure when their home page says, “We didn’t start the class war but we are going to end it.”

Sounds great only they offer few solutions to our current problems while posting plenty of complaints that make them come across as whiny brats. They also make more than their share of assumptions that are wrong while encouraging behavior that only adds to our nation’s challenges.

For starters, The Other 98% assumes wealth equals happiness and only two percent of the nation is happy because they own over 90 percent of the wealth. They have forgotten the saying, “Money can’t buy happiness,” and seem to have watched one too many Robin Hood films because they believe the only answer is to take from the rich and give to the poor. They assume those who are wealthy have either never had to work for their money or fail to give back to the public when in reality, both are false assumptions.

Many psychologists will tell you their couches are filled with patients who have plenty of money and more than their share of misery to go along with it. They may be able to afford to pay someone to help them navigate their personal conflicts, but none the less, they are not happy with who they are or where they are in life. This may have to do with feeling guilty over their wealth or for other reasons, but one thing for sure, happiness escapes them which is why they are seeing a shrink.

There is also the assumption the top two percent has done little or nothing to help out the less fortunate. Again, this is not true. While it would be nice to know what acts of generosity the wealthy do for others, most prefer to give in a quiet manner. Still, to say Bill Gates has not done anything for the less fortunate is wrong. We also forget the number of wealthy who establish scholarships and endowments to universities so people without money may improve their lives.

There are those like Mark Zuckerberg who care enough and are concerned enough about Ebola to donate 25 million dollars to finding a vaccine for the disease. Even something as seemingly minor as investing in simpler check out stations at places like Wal-Mart that allow someone with no math skills to hold down a job that really can be done by the customer only happens if the wealthy make the investment.

The Other 98% also want us to think the poor have it worse in our country than anywhere else in the world. This is nowhere near the case. Just think of all the people who come to America knowing that being “poor” by our standards is a huge step up from living in a shanty without running water or electricity. Because of all the taxes paid by the rich, and middle class, we have a welfare system that allows our “poor” to enjoy creature comforts that few in most other countries have.

They also believe no one in this country should have to face adversity of any kind and again, only the top two percent are exempt from ever facing any. In fact, our nation was built on adversity and our ability to face it head on and over come it. To think that by taking from the rich and giving to the poor is going to keep someone from facing challenges in life is a fairy tale belief at best. They want us to think being wealthy is a crime. Well, I have news for you, being poor and expecting others to give you whatever you want is a bigger crime.

The other 98% also demands on their home page that all student loans be forgiven because they have been sold a bill of goods by the wealthy. This is not true. Your student loans are the result of many things, first and foremost your inability to afford the cost of the college you chose to attend. This is the result of our federal and state governments allowing the cost of college tuition to increase at a higher rate than the cost of living. It is also what happens when colleges feel the need to build Club Med party environments to attract students who want college degrees that come with fun but no work.

But the biggest problem with The Other 98% is they do not offer solutions that go beyond handouts which only adds to the self-absorbed entitlement mind set that is killing the work ethic in this nation. The more they take from the rich and give to the poor, the more The Other 98% reinforce the idea that life should be given to you. Life is what you make of it and not what is given to you.

Study the history of some of the wealthiest people in America, past and present, and you will find plenty came from humble beginnings and faced adversity along the way. Last time I checked, Steve Jobs died of pancreatic cancer. However, before doing so, he left behind a legacy of hard work, creative risk taking, and good business sense rather than sulking over the hand he was dealt.

The Other 98% would also be wise to study another great revolution that did away with the rich. When Russians tossed out the Czar and the wealthy, they replaced them with a Communist system that resulted in long food lines, housing shortages, a lack of worker productivity, a large military that couldn’t be maintained, and yes, another ruling class that controlled the nation’s wealth.

Things could be better in our country, no doubt about it. Minimum wage needs to be increased. Government spending needs to be tightened up. Education needs over hauling. The middle class needs to grow.

None of this will happen by simply trying to over throw the institutions our country is built upon. Instead, it requires real solutions to real problems and not just the whiny complaints of people who really do not represent what is best for those of us who are the other 98 percent. 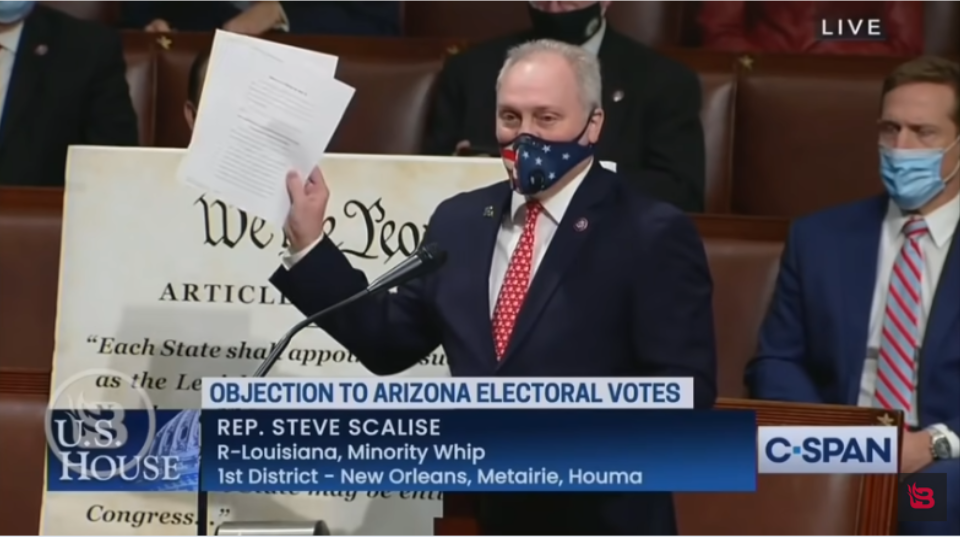 Steve Scalise: ‘It is Time We Start Following the Constitution’