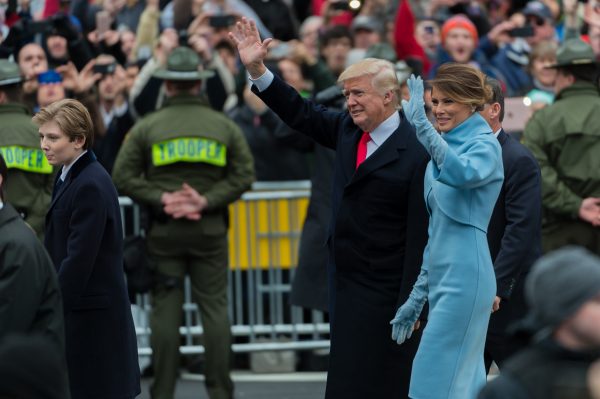 President and Mrs Trump wave to the crowd moments after exiting their vehicle to walk Past the Trump Hotel. This photo was taken at Pennsylvania Ave and 10th St NW. (Michael Jordan)

If a Martian had landed in Annapolis last week and watched Gov. Larry Hogan’s State of the State address, he/she would have thought: “Wow, what a nice guy. What a perfect blend of bipartisanship and leadership. He’s my kind of governor.”

Indeed, that’s the image Hogan wants to project to the voting public – nice guy, good ideas, wants to cast politics aside and work with his foes to get things done.

Except the reality, rather than the distorted image, is quite different.

Hogan acts the role of bipartisan governor quite well for the cameras. Behind the scenes, though, he’s unwilling to open the door to Democrats and quick to play the blame game. He sharply mocks his political critics.

During his two years in office, Hogan rarely has worked cooperatively with Democrats. Instead, he lays down a take-it-or-leave plan of action – as he did last week – and refuses to negotiate a middle ground.

You can chalk up his most recent State of the State speech to political hype and self-congratulatory back-patting. If there’s anything wrong happening in Maryland, it’s not his fault but those self-absorbed Democrats. Nary a negative word was sounded by Hogan – until he took some swipes at Democrats.

There’s no surprise here. Hogan wants to put a politicized, glossy filter on the Maryland scene.

What did come as a surprise was Hogan’s complete avoidance of the proverbial elephant in the room – widespread fear and trembling as a radical populist takes charge of the U.S. government just 32 miles away.

Hogan’s high popularity numbers stem in part from his careful “I’m not involved” approach to hot-button societal controversies. That now includes anything and everything happening in Trumpland.

Yet how can the governor ignore the dire situation Maryland could face later this year once President Trump and determined tea party Republicans in Congress demolish the Affordable Care Act providing health insurance for 430,000 Marylanders?

He said not a word about the ACA’s demise and what, if anything, he will do to avert a health-care crisis in the Free State. Hogan remains mum.

The implications for Marylanders and Hogan’s budget are immense. That should have been a priority item in Hogan’s address to the legislature. Instead, he remained silent.

Once again, Hogan proved himself anything but a pro-active governor. He’s almost completely reactive, and only after factoring in popularity numbers and his reelection campaign effort.

Hogan gave no indication he is making plans to cope with what appears to be a whirlwind of destructive actions in Washington that could bring Maryland to its knees.

Maryland and Virginia are the states most at risk from Draconian budget moves by Trump and Congress. Federal employees constitute 8% of Maryland’s workforce.

Sweeping personnel and spending reductions will affect all of the Maryland economy. Yet we’ve heard not one word about this from Hogan.

Trump’s anti-immigrant executive order is causing confusion, fear and uncertainty at Maryland colleges and universities and within immigrant communities. It could create massive disruptions at research and education centers at College Park, the University of Maryland Medical Center and Johns Hopkins – both the university campus and the sprawling East Baltimore medical complex.

For state government, Hogan’s balanced budget could rapidly tumble into a deep deficit, requiring massive revisions this legislative session and special sessions later in the year to react to sharp federal funding cuts and job layoffs.

Hogan could have no choice but to make highly unpopular cutbacks, a move that won’t help his reelection chances.

It would have helped if the governor had reassured lawmakers and the public that he and his staff are hard at work developing alternative plans and creative approaches to help Marylanders who might lose health insurance or their federal jobs en masse.

Instead, Hogan pretends the threat from Washington doesn’t exist.

Dark, threatening storm clouds are on the horizon, heading toward the Annapolis State House from the southwest.

Yet Hogan keeps telling us it’s a sunny day and everything is copasetic.

Maybe it’s time for the governor to adopt the Boy Scout motto, “Be Prepared,” and get the state and its people ready for what could be a tumultuous and unsettling time.

Colbert Report under fire: Why?