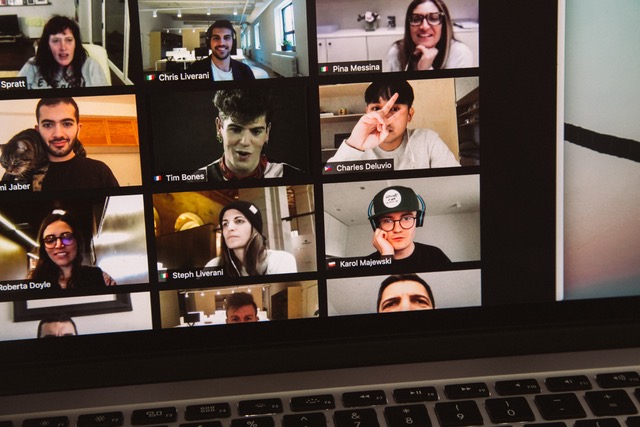 Photo by Charles Deluvio on Unsplash.  That’s him flashing the peace sign.

Covid-19 was the original excuse, but not anymore.  The pandemic that is still lingering may have left us with no choice, but then people got used to the many other advantages of working at home.  The result is transformational and is, if the trend continues, threatening to re-weave the fabric of our economy.

No need to waste time commuting – as much as an hour or two a day for many people in higher population markets.  All total, that’s hours a week that could be more productively invested in work, personal business, recreation or just getting some more sleep.  No reason to have a second car for basically no other reason except to get to work and home again.  No need to dress up every day.  No more dropping a donut or spilling coffee on your lap.  No more putting on makeup in the rearview mirror.

Remember picking up random people in the suburbs to have enough passengers to qualify for the high-speed lane?  Risky business, but that was then, this is now.  And who doesn’t love a chance to see your spouse and children during the day without having to leave work to do it.  Yes, friends, it’s all about commuting to work in your jammies and fuzzy slippers – and achieving a better “work-life balance,” whatever exactly that means.  But is staying at home really the solution?

Without question, there are trends forming that will reshape our local economies as consumers prefer the at-home workplace option that our technology has made possible.  Employees are in charge.  And it will stay that way for as long as the economy is strong and competitive jobs are readily available at companies that allow and may even encourage “homework” for the office expenses it saves them.

It’s a movement fueled by an unexpectedly strong dislike for the long-established routine of office work that is now finding its voice.  Unfortunately, it’s a trend that can easily be crushed by the next recession.  That’s a point I make, not incidentally, at a time when the Federal Reserve may just make one happen, a recession that is, in its grossly misguided efforts to reduce inflation.  If the great pool of alternative jobs dries up, people will be forced to go back to their offices whether they like it not.

Well, that depends, doesn’t it, upon whether or not working at home is really a good thing?  Is this the “Great Resignation” or just the “Great Staycation,” a temporary solution to workplace anxieties that’s getting the attention of employers and local governments, but should be resolved by other means?

Apart from issues related to the pandemic, is working at home really consistent with who we are?  Or is it contrary to human nature, a distraction made possible by the Internet and not at all in our best interests?

Some 70,000 years ago, during an epoch when the earth was cooling, our species was hanging on by a thread.  By various estimates, we were down to only 1,000 to 10,000 “breeding pairs,” just a few thousand of us, worldwide, huddled together here and there.  This all has to do with what are called “genetic bottlenecks,” “ice ages” and the coincidental explosion of the “Youngest Toba” super volcano and the long-lasting global winter that eruption produced.

And yet, our great, great, whatever ancestors held it all together and we made it.  Those who survived did so, no doubt, in large part because of how effectively they interacted with each other.  More to the point, they pulled it off, face-to-face and not by Zooming at each other from their home offices.  The current human population of the earth is 7.75 billion.  Every one of us is related to those 1,000 to 10,000 mothers and fathers who became the founders of our genome.

We are, at the very heart of human nature, social animals.  We have succeeded light years beyond the expectations and imaginations of our ancient predecessors, precisely because of how effectively we have worked together.  Without the least exaggeration, collaboration is the key to everything, good and bad, that we have done – to every bit of the progress, such as it is, that we have made.

In point of fact, at the core of our economy is the basic principle of specialization of labor.  Without exception, every mundane thing we consume involves the contributions of a myriad of other humans who have specialized in this or that.  Likewise for all the great and wondrous things that humanity has accomplished.

Apple has told its corporate headquarters employees to return to the magnificent building it built for them.  Is it just that Apple CEO Tim Cook is lonely?  Or does Apple believe, with good reason, that people working together, in-person, create the synergy that has defined its corporate culture from the beginning?  The reality is, there is magic when people work together in-person, a multi-faceted chemistry that isn’t present for their counterparts interacting via computer screens.

So important is this synergy – not to mention the difficulty of managing a large, dispersed workforce – that companies want their employees back despite the very substantial potential savings to their costs of operation if office work becomes obsolete.

I get it, but ask yourself, is whatever you do for a living so simple that it cannot possibly be made better by diverse human interaction?  Is that all there is to you?  Is this – whatever you’re doing hiding out at home – really what you want to be doing for the rest of your life?  With quite probably greatly diminished prospects for career advancement?

And then, there is the thud of the other shoe dropping.  What about the social component of in-person interaction?  The comradery?  The relationships, simple and profound, that are the result of people working together?  Or just meeting incidentally while picking up coffee at Starbucks?  Or by getting to know colleagues and meeting their friends when you go out for a beer or dinner after a long day at the office?  There’s something about the chemistry between people that doesn’t happen through a screen.  Maybe you need to be there to smell the pheromones.

We’re not meant to be hermits working in the isolated confines of the huts, however elaborate or not, that we call home.  Zooming isn’t human nature.  Certainly not for our ancestors 70,000 years ago whose collaboration then made you and me possible today.  It’s not how we got this far – and isn’t likely to be the solution to whatever’s bothering us.

At best, I’m guessing that we’re missing the point.  That the problems that make working at home so attractive to so many are best solved by envisioning and implementing other long overdue changes to how we work.

Ironically, we may all need to get back to our offices to figure out what to do.

“Zoom” is a tradename of Zoom Video Communications, Inc.  To the company’s credit, its corporate name has become a generic term referring to video conferencing in general which is how the word is being used in this op/ed.