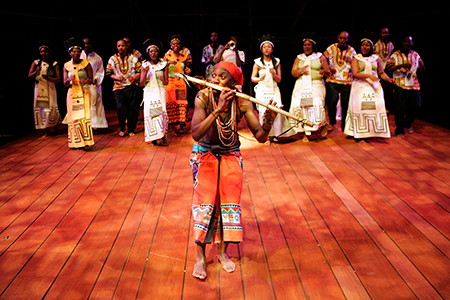 There is absolutely no evidence that Amadeus Mozart ever traveled to Africa. Yet elements of his opera, The Magic Flute, bear a striking similarity to Tsonga tradition. Thunder and lightening birds; byzantine tests of merit, and enchanting instruments carved from animal horns are all found in African folklore. Perhaps that is fitting, as South Africa’s Isango Ensemble melds Mozart’s melodies with African imagery, music and dance in a delightful touring production of The Magic Flute – Impempe Yomlingo.

Directed by Mark Dornford-May, the Isango Ensemble transports Mozart’s allegorical tale to a distant land where people still grapple with the problems of ancient religion at odds with reason. Along the way, this production takes occasional liberties with Emanuel Schikaneder’s libretto, but it’s all in good fun and the audience at last Tuesday’s performance at the Lansburgh Theatre in Washington D.C. loved every minute of it.

In the story, a swooning prince named Tamino is rescued from a fiery serpent by three warriors of the Queen of the Night. A bird catcher named Papageno takes credit for killing the beast, only to be punished by the warriors for his deception. The warriors show Tamino a picture of Pamina – the daughter of the Queen of the Night – and tell him she is has been kidnapped by the evil Sarastro. Tamino immediately falls in love with the beautiful Pamina and, with the help of Papageno, vows to rescue her. To aid them in this quest, Tamino is given a magic flute; Papageno a box with magic bells. The instruments have the power to turn evil deeds into good.

But Tamino and Papageno soon discover that all is not as it seems and each must ultimately pass a series of tests to prove his worth.

Overall, this production is enjoyable and entertaining; an enchanting journey with just a few misses along the way.

At several points, lines were lost when the actors were slightly turned or singing upstage with the net result that, vocally, the women in the two principal roles – Zolina Ngejane as Pamina and Pauline Malefane the Queen of the Night – far outshined their male counterparts.  This is not to say that any of voices were bad. Quite to the contrary; almost every one who appeared onstage had a mellifluous sound. But only the basso who sang the part of Sarastro had the range to consistently fill the modest Lansburgh Theatre space. Even when presented in a popular format, The Magic Flute is opera – not a Broadway show – and losing measures of music because a pleasant voice doesn’t carry is something the producers will need to address.

What some of the principals lacked in volume was more than made up for by the boisterous chorus. Blending seamlessly with the rhythm of water xylophones, African balafons and drums, the overall effect is a joyful, unforgettable sound; taking familiar orchestral melodies to an entirely new level.

On the acting side, this company is very engaging, from the child-like innocence of Tamino and Pamina and the feckless humor of Papageno, to the regal air of Sarastro and the dark demeanor of the scheming Queen of the Night.

A simple, slightly pitched stage with a few trap doors provides the setting for the players. The chorus/musicians are at all times visible in the wings. Musical director Mandisi Dyantyis added his own talents on the balafon as well as trumpet licks for the andlanti, or African flute.

The eye-catching costumes consisted mostly of traditional African apparel with nods to modernity in the fatigues of Papageno along with bows to both the Supremes and the Temptations.

The moral of The Magic Flute may be one can’t know true joy without true pain. But this production is a sure delight – sans all the requisite affliction.

You can almost hear Mozart laughing.

For those who miss the DC engagement, the company will appear in Baltimore for three performances October 17-19. Information and tickets for the Baltimore shows may be found by visiting Centerstage.

Eberly commentary: No geographic mistake in Gansler’s pick of Ivey 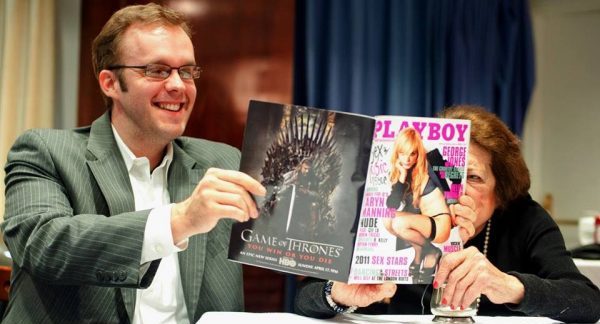 Here’s The Thing with Tim Young: ‘Daily Show’ for conservatives