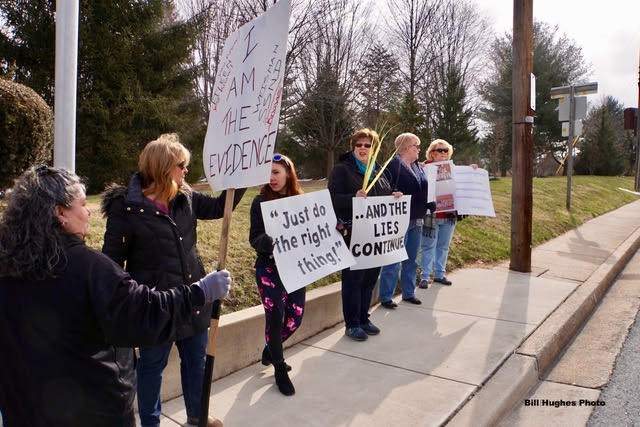 On a brisk, Palm Sunday morning about 20 activists, carrying signs and posters, gathered at the Villa Assumpta on North Charles St. at Bellona Avenue in Baltimore County, MD. The Villa Assumpta is a retirement home, a convent for nuns run by the School Sisters of Notre Dame. (SSND).

Back in the 1970s, Sister Eileen Weisman was the principal at the Catholic Community Middle School (CCMS), formerly Our Lady of Good Counsel School in Locust Point. It was a SSND school. One of the lay teachers under her supervision from 1972 to 1979, was the later convicted – sexual predator – John Merzbacher.

The protesters claim Merzbacher’s tenure was “a reign of terror” for many of his students – male and female alike. They insist Sister Weisman knew or should have known, about his serial sex abuses and other outrageous conduct, including repeatedly threatened students with a loaded handgun – and did nothing.

The coverup, they claim, continues to this day. Sister Weisman and the SSND, along with Archdiocese of Baltimore (AOB), have denied any wrongdoings on their part in this sordid matter. The AOB said it didn’t learn of the demented Merzbacher’s abuses until 1988.

Merzbacher was finally convicted of raping one of the students in 1995, at a criminal trial in Baltimore City. He received four life sentences for child rape. Charges involving other victims, about 12 in number, were dropped. Merzbacher, now age 76, is currently serving his sentence at the Eastern Correctional Institution in Westover, Maryland. His conviction was affirmed on appeal. https://courts.state.md.us/data/opinions/coa/1997/99a96.pdf

Media accounts of the rape trial indicated that Merzbacher held a “loaded gun” to the head of his victim, Elizabeth Ann Murphy, then 11 years of age. Since then, a civil suit was filed by numerous other victims, including Linda Malat Tiburzi.

Ms. Tiburzi claims Merzbacher sexually abused her and threatened her with a gun when she was a student at CCMS from 1973-76. That suit, which included 14 plaintiffs, was dismissed because it ran afoul of the three-year statute of limitations.

In her civil lawsuit, Tiburzi claimed that on one occasion when Merzbacher was abusing her, she had been pinned to the ground and her blouse was wide opened when Sister Weisman suddenly unlocked the door and walked in. The nun made a comment about his keeping the door locked. Tiburzi continued, but Sister Weisman “did nothing. There was no investigation, there were no questions.”

At the protest, Marsha Wise, a former student at CCMS, told me that Sister Weisman “facilitated” Merzbacher’s wrongdoing. There was no way she couldn’t have known. Her office was on the second floor and when she came in and out of the building using the front door, she had to pass Merzbacher’s classroom, which was also on the first floor.

Two other fellow students at the rally, Bill Stankiewicz, and Kathie Lewandowski Richardson had similar terror stories to tell me. They all underscored how the trauma of those early years at CCMS, “the living in fear” still stays with them.

One of the students related to me an account of how Merzbacher, at the time an uncontrollable wild man, had supposedly shot a gun off in one of the classrooms to intimated everyone. She related also how one student who complained about Merzbacher and Sister Weisman’s suspected conduct was arbitrarily shipped off to a mental institution for a year’s confinement!

Some of the survivors want Sister Weisman to come clean, others want her to be indicted as an accessory to Merzbacher’s evil doings. As one of the students put it: “She deserves to do time in jail.” They all agree on one thing: “We need closure on this issue.”

Another teacher at the CCMS, during that same time period, was Gary Homberg. He said that Sister Weisman was told about Merzbacher’s sexual misconduct, including his bringing a gun to class. Homberg’s plea went nowhere. He was told by church officials, including the then-parish priest, Father Herbert Derwart, now deceased, to “shut up” about his complaint.

Homberg repeated his claim of misconduct about the case on a recent WJZ-TV expose, featuring Denise Koch, one of the station’s anchors. He said “church officials just looked the other way. They would have to be deaf, dumb and blind not to know what was going on.”

After leaving, the CCMS, Sister Weisman became the principal at the “The School of the Cathedral” of the AOB, on North Charles St. When the dispute involving her knowledge of Merzbacher’s wrongdoings heated up with his criminal trial, she reportedly was soon Bafterward transferred to Rome. Now, she’s back in Baltimore, “living in a convent on school property,” according to a source.

The protest rally was sponsored by the “CCMS Alumni & Friends Against Abuse.” Its taglines for the event were #ccmsvictimsunite and #sheknew.

To see more of my photos, go to my Facebook page. 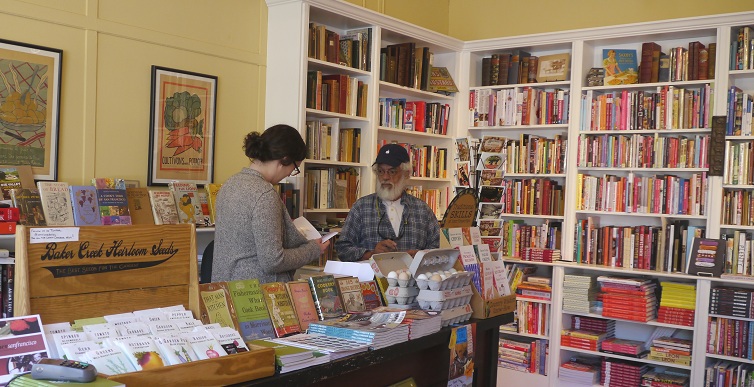 How to Get a Divorce Without a Lawyer in Ohio

A Locust Point Memory: ‘Stay Out of Their Alley!’